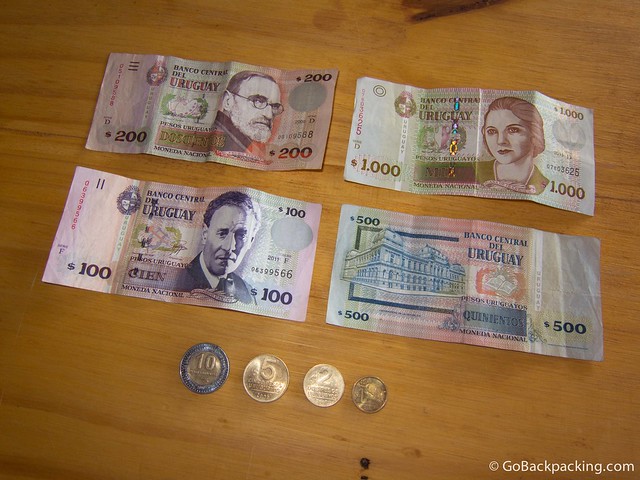 The cost of travel in Uruguay is about 20% higher than in Argentina, though still lower than Brazil.

In the first half of the 20th century, Uruguay was known as the “Switzerland of South America.”

In the 21st century, its reputation as a summer vacation destination for the continent's elite only builds on that reputation.

However, the country's small size and efficient bus system allow even the stingiest travelers a chance to discover the country within a few days.

It's best to view Uruguay as a cash-based economy and act accordingly. If tour companies or restaurants do take plastic, it's likely to be with a noticeable surcharge.

Most ATMs accept international debit and credit cards, with a maximum withdrawal of 5,000 pesos per transaction.

If you have a higher daily withdrawal limit through your bank, you can make multiple withdrawals. 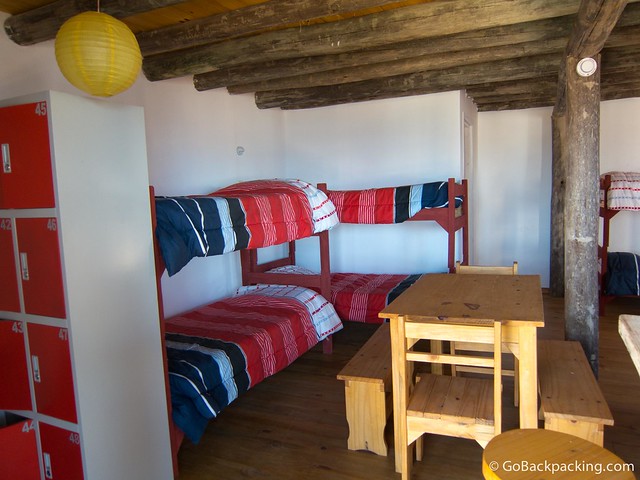 In the offseason, this 10-bed dorm in Punta del Diablo still cost 700 pesos or $20 per night

Hostels in Uruguay are on par with the USA, Australia, or Europe.

Rates can easily double or triple per night in the Summer season (late December through February) when demand is highest.

Breakfast is often included in the price of a bed, though what's on offer will vary.

As far as standard hostel breakfasts go, it's on the better end of the spectrum.

If you want to stay for a few weeks or more, it'll make sense to rent an apartment.

If you intend to visit during the Summer season, you'll have to book two to three months earlier. Otherwise, it'll be tough to find something once you arrive.

During the low season, Punta del Este's apartments are very affordable.
The only problem is the city is a ghost town. During the Summer, rates skyrocket.

Hostels offer reliable broadband internet with Wi-Fi.  If you can afford it, Uruguay would make a terrific summer spot for operating a location independent business. 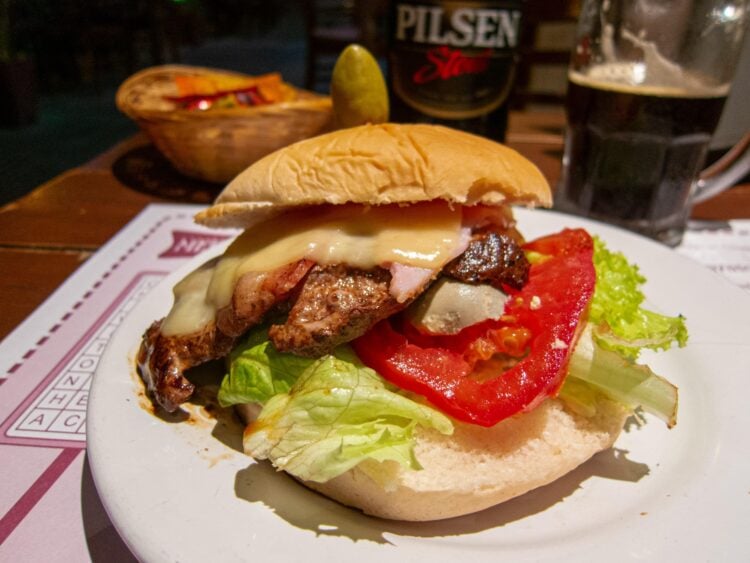 The affordable chivito (steak sandwich) is available in most restaurants

Food in Uruguay is not cheap, which leads many backpackers to cook for themselves to save money.

These were regular restaurants, nothing fancy. Expect to pay more if you want a river/ocean view, or a more sophisticated atmosphere. 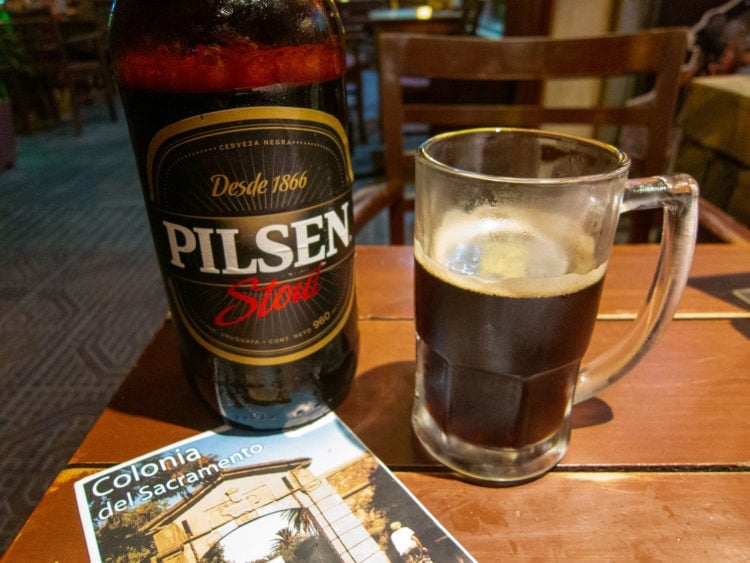 Cost of Drinking / Going Out

Partying in Uruguay isn't cheap either. Liter bottles are the norm and perfect for sharing. 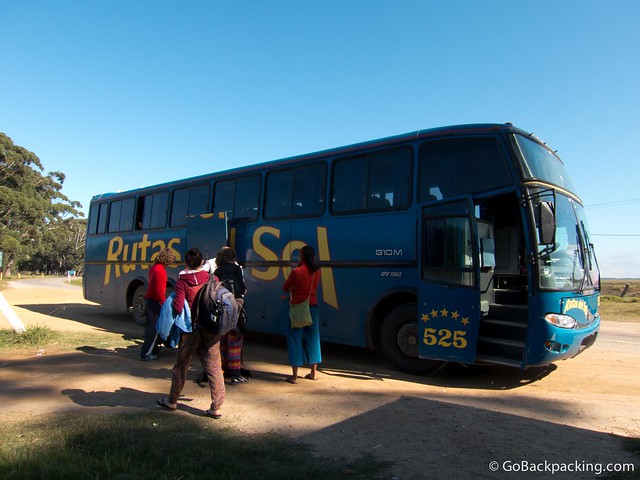 Uruguay's coastal cities, beaches, and inland towns are all connected by an extensive network of bus routes.

The distances are short, and the fares are closer to what you'd pay in Ecuador than Argentina.

Plus, the inter-city buses are modern, clean, and comfortable. Most feature reliable Wi-Fi.

Montevideo boasts a modern international airport. However, most budget travelers will arrive in Uruguay via bus from Brazil or ferry from Buenos Aires. 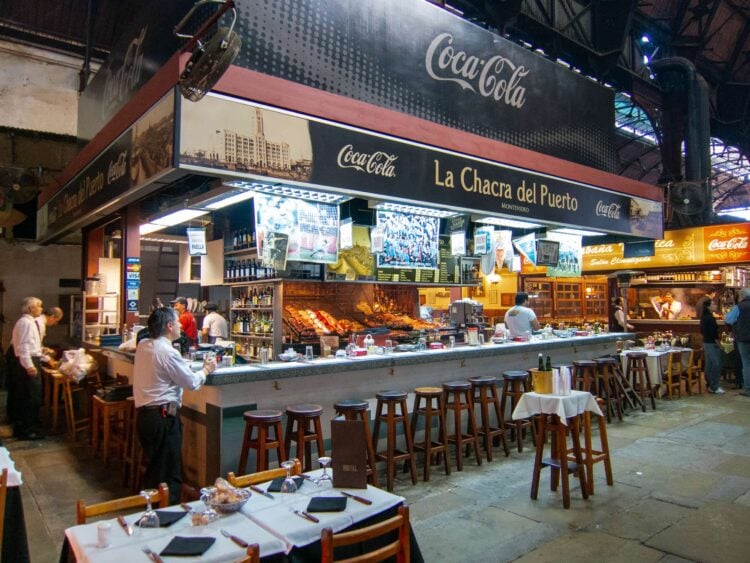 There are plenty of things to do in Uruguay. However, Uruguay is predominantly a Summer beach destination, so the most popular activity is always free.

Overall Cost of Travel in Uruguay

Despite Uruguay's small size, it's one of the more expensive countries to visit in South America. But, this isn't a reason to skip it altogether.

On the contrary, because it's so small, you can quickly get a feel for the country after just three to four days.

The best ways to save money are to visit outside of the peak Summer season (late December to February).

March and April are the shoulder season, so it'll be easier to find accommodation, yet there will still be warm weather and people around.

Cooking for yourself is another way to save, as is cutting back on alcohol and partying.

I been in January and February 2015 with my wife on honey moon. We didn't expact that Uruguay is so expensive. We did expact for Punta Del Este, but not for Montevideo and Colonia Del Sacramento. We are from Belgrade, Serbia. In our country is cheaper compare to Italy, France, Germany, Austria. I speak Spanish. But who doesn't speak Spanish or Portuguese, can have problems with comunication. In the entire continent they speak those 2 languages. So they are not really good in english. But if you speak spanish, the people is very nice. They will help you. And the most important thing, is safe. Uruguay probably is the safest country in South America. I would recommand for a trip. But for people from Europe I would recommand Serbia. Is cheaper, is better for parties and night life. And the food is very taste. In Uruguay the food is good. Specialy meat. But pizza is totaly different from Italian pizza. Of course in Montevideo visit the Stadium Centenario and the Football Museum.

You need to update this post, nowadays everything is more expensive. The exchange rate is 29 pesos = 1 US dollar.

That wouldn't make it more expensive, but cheaper if you are using U$D.

Thanks for the feedback. Indeed, currencies are always fluctuating.

I don't know that it's feasible for me to continue to update all the articles on Go Backpacking related to the cost of travel on a regular basis. Most are written with only the currency in U.S. dollars, so we won't know what the actual cost was in the local currency.

Thank you for the information!