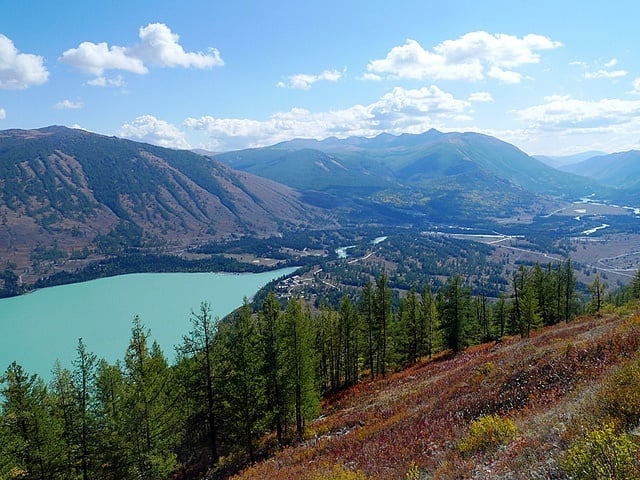 The beautiful Xinjiang region in the west of China (photo: taoming)

Western China, namely the Xinjiang region, is quite far off many travelers' radars.

Being on the farthest western area of the country, the region is often bypassed in favor of exploring the dense east coast.

However, if you are looking to experience a truly “different China” and explore some of the more foreign and lesser-known cultures — make sure you spend some time visiting the amazing Xinjiang Uyghur Autonomous Region.

Unknown to many Western travelers, China is home to over 50 ethnic groups. Western China, being so close to many other countries, draws in people from Mongolia, Tajikistan, Kyrgyzstan, Pakistan, Afghanistan, and even India.

This region, about a sixth of the size of China, is home to some of the most authentic towns and interesting places to see the cultural diversity and historic spots along the ancient Silk Road trading route.

But, given its expansive size, the following list of destinations in the region should help a would-be traveler make better plans: 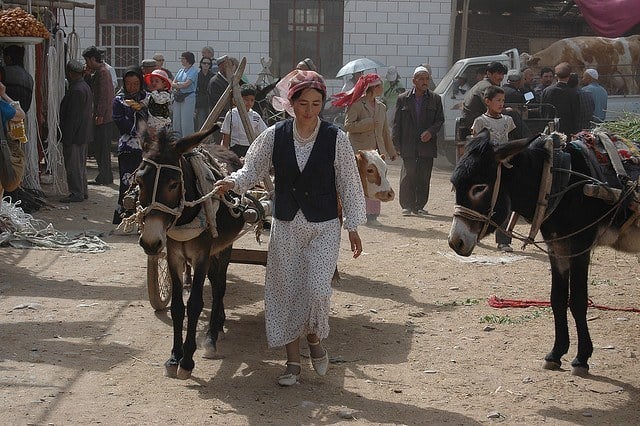 The people are amicable in Xinjiang, despite a fairly significant language barrier.

English is not that common in towns like Kashgar, besides a small handful of operators in the hospitality industry, some shopkeepers, and, of course, expats.

From the number of young children looking and saying “hello” to the strange foreigners (us) on the street, it seems likely that there may be a little more English spoken in the years to come.

Unlike most of China, Mandarin is barely spoken in Kashgar and some of the smaller towns.

The Han Chinese population is tiny in Kashgar, so even if you speak Mandarin, it is probably best to learn a few Uyghur phrases. 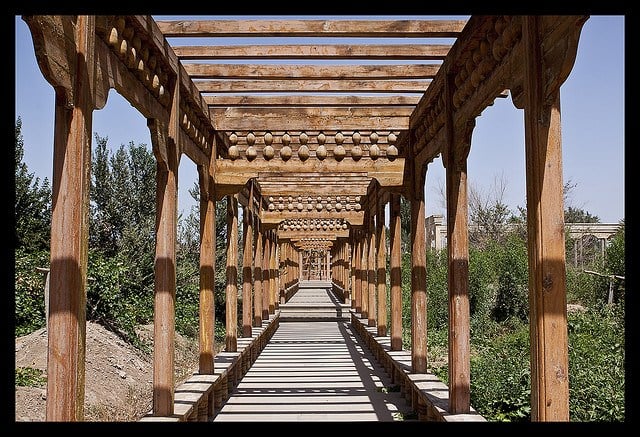 Turpan is an ancient city, which was one of the most significant stops along the Silk Road.

The town now thrives on tourism, with several key attractions located in or near the town.

Jiaohe is an ancient city, whose ruins have been preserved a short distance outside of town.

There are also some caves, the Bezeklik Thousand Buddha Caves, which are located about 45 kilometers to the east, and more than 40 of them contain murals.

This area is known for grapes, especially those turned to raisins, and it is possible to reach a place called Grape Gully just a short 10 kilometers from the city. 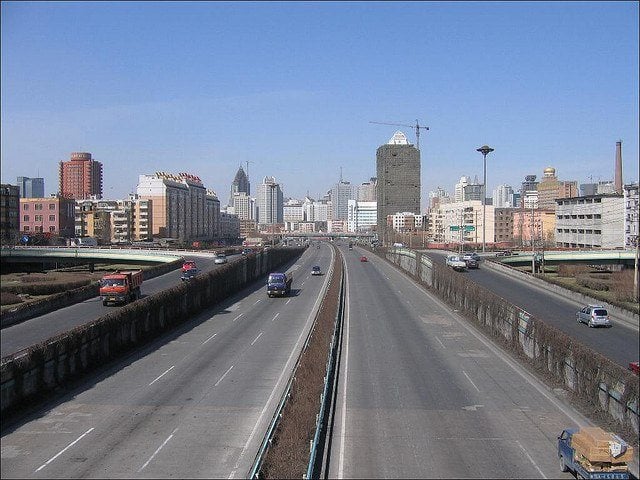 Urumqi – the big city in the west. (photo: giladr)

Urumqi is the largest city and capital of Xinjiang – with a population of around 2.7 million people and a lot more signs of Western and Chinese development than other areas in Western China.

Urumqi is the most easily accessible entry point for most tourists looking to experience Western China.

Most towns in the Uyghur Autonomous Region are accessed by smaller planes, trains, or buses that go through Urumqi.

While it is a large city, it is still unique in the blend of people and cultures.

After visiting Kashgar, it is easy to spot street food vendors making flatbreads, grilling kebabs, and meeting a taxi driver who speaks Uyghur instead of Mandarin.

In Urumqi, there are many sights to see, such as the Xinjiang Geological and Mineral Museum – which has an extensive collection of interesting rock and crystal formations, particularly those with modern significance as geology is key to the region's economy.

When we went, the museum had free entry, although unfortunately a lot of the information was not available in English. 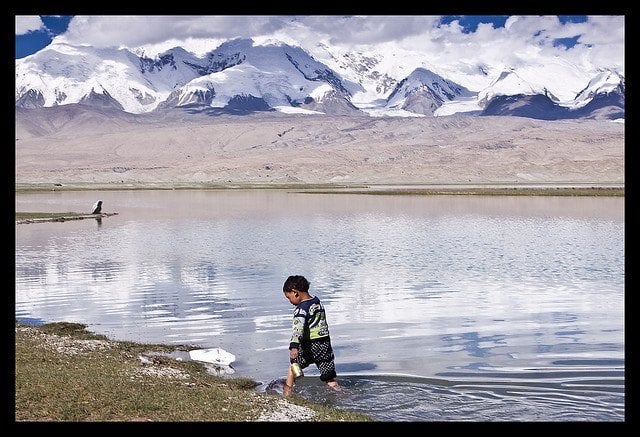 The Karakul lake is famous for being surrounded by snow-capped mountains and is sometimes called the “black lake” or “mountain lake” by locals – at least when they tried conversing with us in English.

The area is renowned for its natural beauty and can be experienced with more than just a day trip if you arrange to either camp or stay in the small town nearby.

You are also likely to see the traditional yurts or gers in close proximity to the lake, which local people still use today. 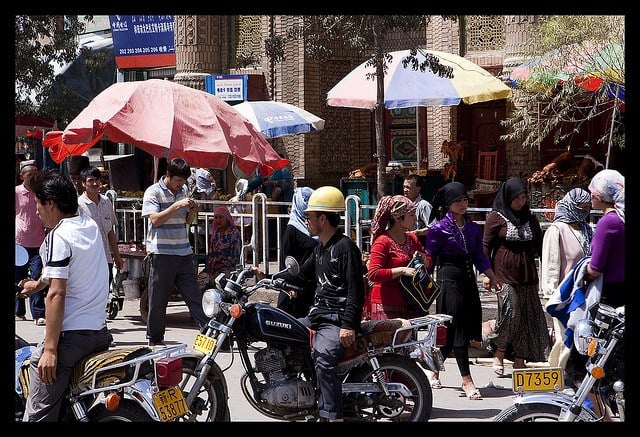 The Bazaar in Hotan (photo: dperstin)

Also commonly known as “Khotan”, Hotan is a famous town situated right next to the Taklamakan Desert.

The people of Hotan are primarily Uyghur and adapted to the harsh climate of extreme heat in the summer and freezing temperatures in the winter.

It is well-known for the mummies which have been discovered there, including some which are now displayed in the Xinjiang Uyghur Autonomous Region Museum in Urumqi (great free museum by the way).

While in Khotan, you can see some of the sites, the Sunday markets and the Hotan Cultural Museum, which is a bit smaller, but also has a couple of mummified bodies and relics from centuries ago.

Wow, the first image looks a lot like the wilderness in parts of the US

Hey Brooke, great shot of the markets! A friend of mine raves about the Xinjiang region so when I make it to China I'll definitely visit.

Thank you for highlighting this area. I've been to Xinjiang twice and absolutely love it. It's my favorite region of China, in large part due to the food. Spending a night in a yurt at Karakul Lake was one of the highlights of my time in China. The only city I didn't like at all was Turpan. It's the top destination in Xinjiang for Chinese tourists and as such has almost no facilities for budget travel.

Great suggestions for travel out here in Xinjiang...I definitely second all the choices here.

Among some others that I would also add to your list, a little more "off the beaten path": 1. Tuyoq: a small village about 45 minutes outside of Turpan 2. Yili & Salimu Lake: on the western tip of northern Xinjiang, filled with beautiful grasslands 3. Kanas Nature Preserve: a beautiful lake that is well-known for it's mysterious "loch ness" creature.