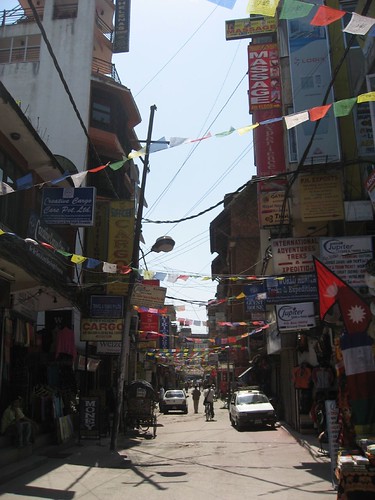 Thamel is the tourist neighborhood of Kathmandu, meaning there are a plethora of outdoor stores selling fake supplies most notably North Face (err, “North Fake”) and Mountain Hard Wear clothing and sleeping bags. Just about everyone says they are a guide, and it feels very hard to get a straight answer when you try to find out what equipment you will need for your trek.

I really wanted to wait until I was in Pokhara with the guidance of a hired guide before buying any additional stuff, yet I could only spend so much time surrounded by shops before I caved in and wanted to spend a little money. I bought a -5 degree Celsius rated sleeping bag, an aluminum “Annapurna” walking stick, a short-sleeve shirt, a water bottle, waterproof gloves and pants. The latter two I didn't even take on my trek after talking to a few more straightforward guides in Pokhara. As I continue to learn, people will often play on your fears and ignorance to get you to buy just a little more. I'm proud to say I resisted most of what was pushed on me. Progress!

For anyone planning to trek in the Annapurna region, you'll most likely spend a night or two in Pokhara first. Do yourself a favor and wait until you get there to buy any necessary supplies. Everything the Kathmandu shops sell can be found in Pokhara, and it is a much more peaceful atmosphere to do your shopping. 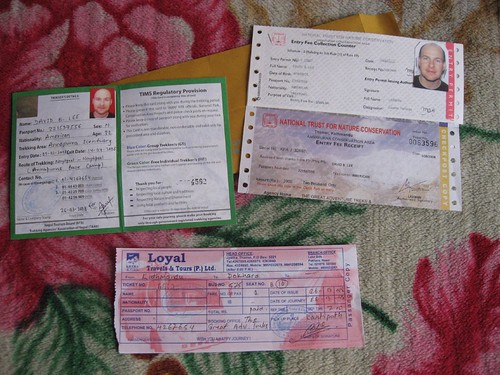 Also, if you intend to trek through the Annapurna Conservation Area, you'll need to buy a permit. These can be obtained in Pokhara, which was not the answer I got when I bought one in Kathmandu through a travel agent. Lastly, all trekkers need to get a separate registration pass which is free. Again, these are available in Pokhara, often through the guide you hire. Despite the clear-as-day print on the pass which indicated it was free, I still agreed to pay a “service” fee of $10 in Kathmandu because the agent said it was a hassle to obtain them yourself. And he gave me the wrong type of pass to boot. Often such salesman get away with this tripe because customers don't care enough to return and cause a stink after the fact, myself included.

Hi ? extremely fantastic internet site you've created. I loved studying this posting. I did desire to write a remark to tell you that the design of this internet site is really aesthetically pleasing. I employed being a graphic designer, now I'm a copy editor. I've usually enjoyed doing work with computer systems and am attempting to learn code in my spare time.