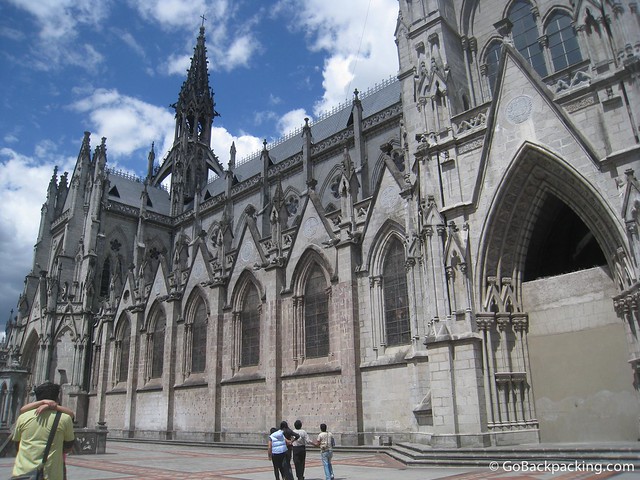 A walking tour of the historic center in Quito is a relaxing way to start your sightseeing in Ecuador's high-altitude capital city.

Listed as a UNESCO World Heritage Site, and considered to be one of the best preserved old towns in Latin America, the neighborhood is full of old churches, plazas, and museums.

I began my walk at the Basilica del Voto Nacional, which is the largest neo-Gothic cathedral in the Americas. A ticket to enter costs $3.

Elevators run up both towers in the front, but I declined them in favor of the stairs. After two flights, and a pounding heart, I remembered that I was 2,800 meters above sea level. 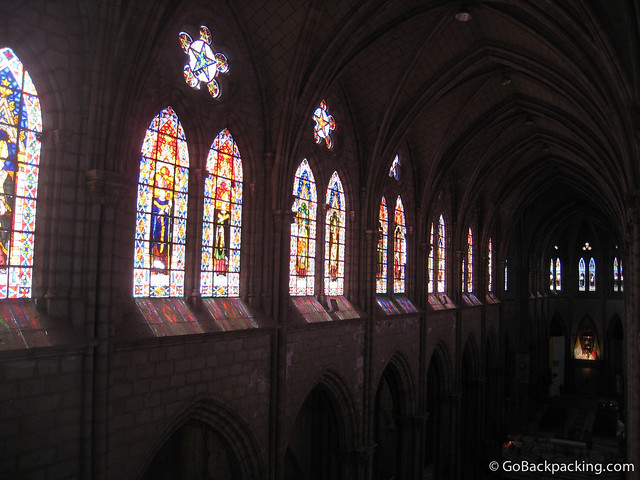 By the third or fourth floor, you can take a break and look out from a balcony down the cathedral's nave. Stained glass windows line the upper walls.

Go a few more flights up, and you'll be presented with a long, sketchy looking walkway that extends down the length of the nave, and ends with a near-vertical ladder.

Walk up the ladder, and then an even sketchier one to reach a spire in the rear of the cathedral. Just don't look down and you'll be fine. 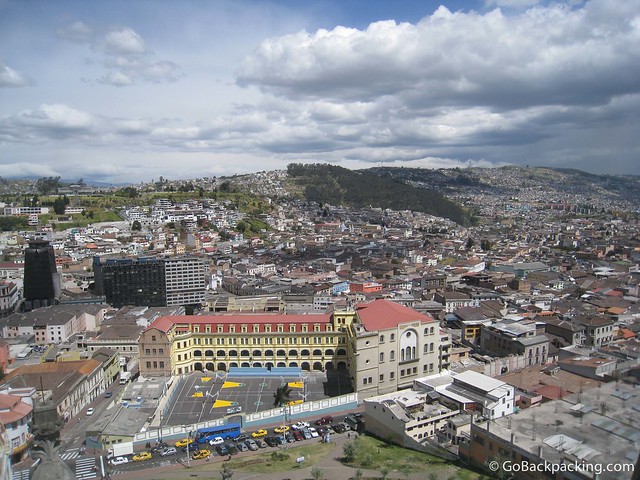 View of Quito from atop the Basilica del Voto Nacional

The rewards of your death-defying cathedral climb are sweeping views of central Quito.

During my visit, I ran into a few other travelers in the spire. Upon asking one of the two 22-year old, blonde, blue-eyed girls to take my photo, we began chatting. One of the girls was from the USA, and the other from Norway.

As we were all starting our walk of the historic center of Quito with the Basilica del Voto Nacional, we joined forces for the remainder of the afternoon.

From the Basilica, we walked a few blocks to the Plaza de la Independencia, which was the true center of the historic center. We didn't linger too long, and there wasn't much to see.

I didn't find the central plaza to be particularly pretty, or any more well preserved than similar places I'd been in Colombian cities. 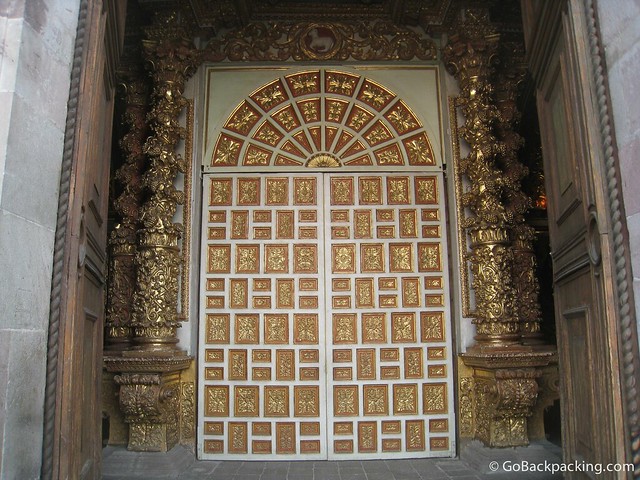 The gold-painted front door of the Church of La Compañía de Jesús.

Next on my list was the 400-year old Jesuit Church of La Compania de Jesus a few blocks from the main plaza. Entrance is $2, which seems like a minor price to pay for what's deemed as one of Latin America's most beautiful churches, but the girls decided to skip it and wait for me outside.

No photography is allowed, however the front door (pictured above) is a good indication of what you'll see inside.

The entire interior of the church is painted in gold leaf. I've seen a lot of old European churches, but none like this one. It was well worth the cost of admission. 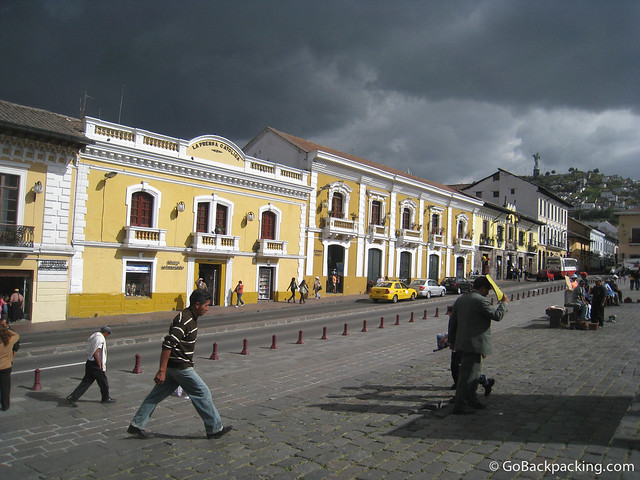 Lastly, I lead our group one block further to the Church of San Francisco, with its large plaza by the same name. By this time, we were still bearing the full strength of the sun from the West, while ominously dark storm clouds began to roll in from the South.

There are a bunch of museums in the old town as well, but I wasn't too interested in visiting them, nor were the girls. Instead we, caught a cab back to the Mariscal neighborhood where we were all staying just as the afternoon rains arrived.

We stayed a few days in Quito, I love the friendly people and the courteus police personnel, very safe city that can be crossed from one end to another for 25 cents. we stayed at a nice hotel named Internacional Viena only two blocks away from the main plaza and had the chance to visit a good number of churches and government buildings. Only 12 kilomiters north of Downtown Quito is Ciudad mitad del Mundo (half the world city) with a complex build just above the Equetor imaginnary line, one can make tricks with the camera, visit a museum and play tricks with earth's gravity like standing an egg on top of the head of a nail. Beautiful country, Ecuador.

Looks like an awesome city to take a walk in!

Looks like an awesome city to take a walk in!

Quito is gigantic. I think most visitors will only ever walk around the historic center and Mariscal neighborhood (the city's zona rosa, and epicenter of hostel life).