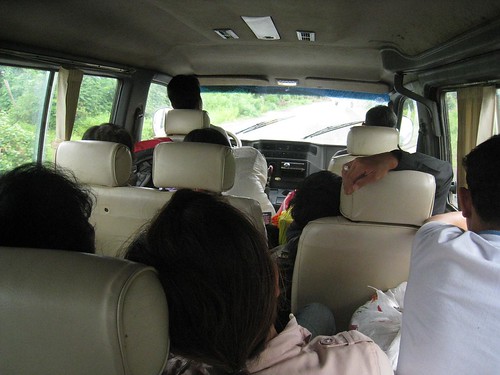 Sometimes I use shorthand in my journal to track my day. The following events are real. If I knew proper names, I would most certainly use them. It is worth noting that the advertisement for this minibus trip to Ban Lung in northeast Cambodia stated 10-12 passengers. The trip was suppose to take 10-12 hours, including 4 hours on dirt roads toward the end.

7:30 am – Moto ride back to Lotus Travel near Rory's Guest House in light rain to pick up my forgotten passport (with freshly inked Laos visa)

8:00 am – Minibus picks me up. I am the only tourist in a bus of Cambodians who do not speak English. The seat I get in the second to last row is of the flip-down variety. The back support is non-existent. As we head out of town, several more people are picked up, with a woman choosing a seat behind me over sharing mine (I don't blame her). This results in a kid sharing my seat instead. Due to all the bags of unknown content, and luggage configuration, the back of my seat is flipped down. I've gone from poorly supported backing to no backing whatsoever, with a mere 11 hours to go. The two guys to the left of me have little luggage and maximum legroom. The guy to my immediate left guards his space by keeping his right knee aggressively pointed out. There are now 17 people, including the driver and me, in the minibus. 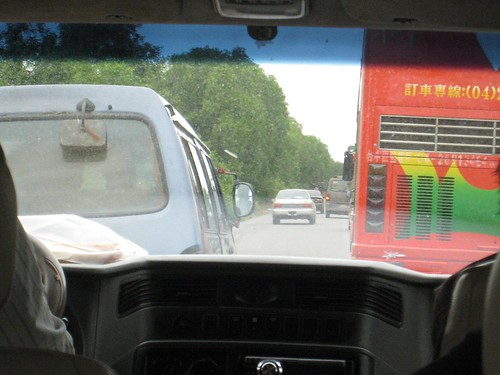 Our driver is the Cambodian Mario Andretti. He doesn't see a car, truck, or bus he doesn't pass at high speed. Anything that moves on the street is warned with a staccato honk – beep beep beep beep beep. I hypothesize that the first beep is a mental note to himself that there is life ahead, while by the fifth beep, he's actually warning the life form. Sometimes, I don't even see movement on the road to warrant this noise. It's incessant, and turning up my new mp3 player to drown it out only hastens my eventual deafness. 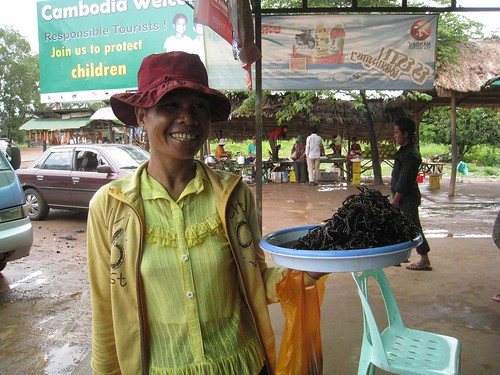 A few hours into the trip, we stop for a bite to eat, and I see a woman selling fried spiders for the first time. She holds a big plate of them in one hand, and a bucket of live ones in the other. Since no one spoke English, I didn't have the opportunity to ask why she was carrying live ones around. My only guess was it indicated freshness. Or maybe customers can choose their snack from the live bunch. If eating a spider was a dare, I would gladly fail to complete it. 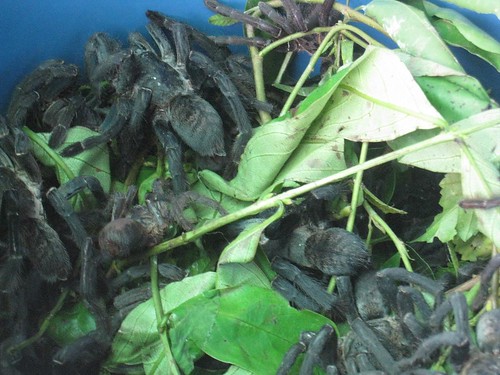 1:30 pm – We reach muddy road blocked by a trapped pickup truck. Many men try to free the truck to no avail. Other trucks begin to circumvent it through more mud. Each success is met with a small cheer from the crowd. It is raining lightly, and as I couldn't resist getting out of the bus for a few photos, my clothes are damp and my feet muddy. I learn one Cambodian man on our bus does speak a little English. When a large bus tries to make its way past the pickup truck along an intersecting mudbath, it gets stuck too.

2:30 pm – The road delay lasts one hour before the large bus gets stuck, and Mario gives up and takes a detour through a village along the shores of the Mekong River. If he has a saving grace, it is an unnerving desire to see his passengers to Ban Lung come hell or high water. 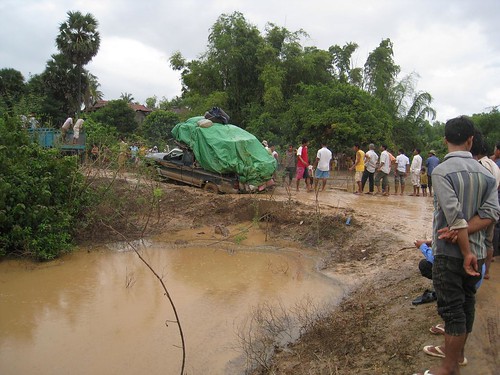 3:00 pm – Lunch in Kratie. The chicken is served on the bone, thus I don't bother to eat it, focusing on the rice instead. I buy some crackers and water.

5:00 pm – Reach Stung Treng where the pavement ends and the 4 hours of dirt roads begin. It is starting to get noticeably dark as the sun heads down. Mr. English, familiar with the route, expects we'll arrive a few hours late, around 8-9 pm. Beyond any initial excitement for the journey, by this point I am in a state of semi-consciousness, still prone to my emotions and hopes of arriving before any power cuts which may be the norm for the small provincial capital.

6:40 pm – Night, pouring rain, headlights stopped working. Mario pulled into a nearby building with lights and people watching TV. Perhaps a restaurant? I've got a pounding headache from the bumps and noise and whole day. Fortuitously, I put some Paracetamol in my daybag the night before, which takes the edge off. I'm tired and cranky. What the hell am I doing in northeast Cambodia? Where will I sleep tonight? We pass very few homes with lights, and I consider the possibility that I may end up knocking on some Cambodian's door in search of a bed. I accept this as my plan-B. My bags, clothes, paintings will all get soaked if I have to walk any distance.

7:30 pm – The headlights were fixed for 30 minutes, then broke again. Mr. English, along with an Asian tourist who had the front seat up until this point, ditched us for a ride with a local. I felt slighted. Apparently my 5 minutes of chit-chatting at the roadblock couldn't compete with the rapport developed with Mr. Front Seat. 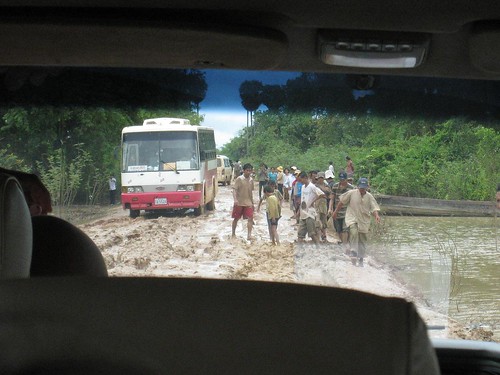 Mario makes the executive decision to continue driving down the pitch-black, rain-soaked, bombed-out, mud road using the flashing amber hazard lights of our Mercedes Benz. We drive at a snail's pace for another 4.5 hours. It was hellacious. The woman behind me (mother of the kid next to me), Ms. Loudmouth, laughed heartily every time we hit a bump in our disabled vehicle. It began to sound like fingernails on a chalkboard. Past any regard for politeness, on several occasions I cupped my hands over my ears in an attempt to display my annoyance. Her son apparently took after her, all but shouting in my right ear when he spoke, spit occasionally spraying onto my right cheek. By now, I was so tired, I had no emotional energy left to be angry or annoyed or anxious.

My comfort, and that of the other passengers, improved incrementally as people began to get off an hour or so outside of our final destination.

12:00 am – Arrived in Ban Lung, a full 4-6 hours later than expected, though the rain had ceased. Even the roads in the center of town were dirt. There was no one around. I knocked on the first hotel lobby I saw with lights on (and 4 men sleeping on cots and benches). Apparently, though it sounds hard to believe, I was able to get the last room available.

A cold shower and sleep were all I could handle.

at least there's a smile from her...