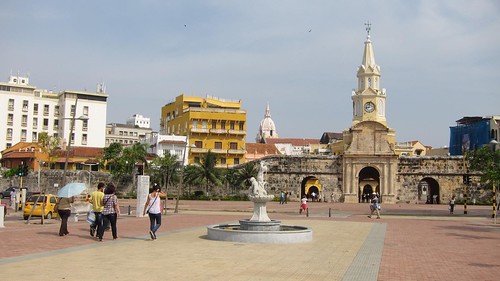 Puerta del Reloj, or the clock tower, is the main entrance to the old walled city of Cartagena.

The Aires flight touched down at Cartagena's airport as scheduled, a few minutes shy of noon.  Stepping off the plane, and onto the tarmac, the strong sun and heavy tropical humidity were already inducing my body to sweat profusely.

One of the two baggage carousels was already surrounded by passengers who had arrived a few minutes earlier on an Avianca flight.  I staked out a spot at the empty carousel.  As much as I've traveled the last few years, I always await my checked backpack with baited breath.  Only after seeing the red, black, and gray bag with 101 straps make its appearance, can I breathe easy.

I grabbed my pack, walked outside, and picked up a ticket with a set rate for a taxi to the Getsemani neighborhood where the hostels are located.  The taxi driver had the air-conditioning on full blast as we drove south; the Caribbean Sea brushing up against the road to my right.  The mid-day traffic was heavy. Despite the heat and noise, it felt wonderful to be back in Cartagena after an all-too-short visit 16 months prior.

I looked at private rooms in a few hostels within a block or two of each other before settling into the one with the lowest rate ($16/night).  Tired from the overnight flight, I tinkered around online thanks to the free wi-fi, and called it an early night. 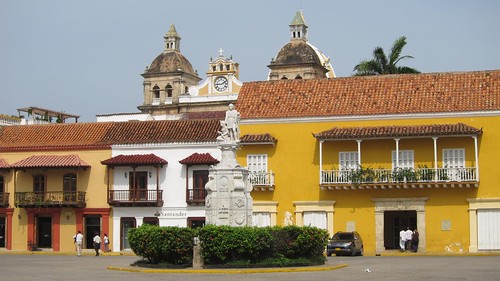 The next morning, I awoke well rested with a desire to walk around old Cartagena before the sun rose too high in the sky.  Figuring I'd be gone for an hour or two at most, I put on a pair of jeans and skipped the sunscreen.  I had a fashionable new hat from New York City to ensure the top of my head didn't burn up under the Equatorial sun.

To experience the charm of the old, walled Cartagena, one simply needs to walk the streets, admiring the Colonial architecture while mixing with the locals, and maybe munching on some fresh fruit.

I left the hostel around 9 AM, passing a bar I remember drinking at last year.  The area was strangely familiar.  My body was walking through the streets in the present, while my mind replayed scenes from February 2009.

When I walked through the clock tower, which acts as an entrance to the old city, I immediately saw Tu Candela, another bar I'd been to before.  More flashbacks, however this time I was traveling on my own, with no pressing deadlines to worry about. 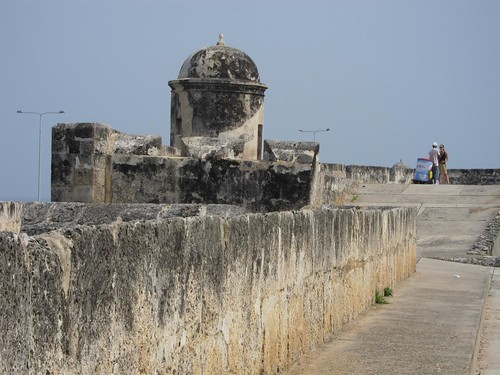 Walking along Las Murallas (the walls) that suround and protect Cartagena's historic center.

I made my way to Las Murallas, the thick stone walls dating back to the 16th century, that encircle the old city.  Rusty canons face the sea, as though waiting for ghost ships from the past to lay siege today.

It was 9:30 AM, and I was already sweltering under the sun, when I came upon a foreign girl talking to a lone Colombian guy selling drinks.

As I got closer, he called out in my direction, “agua…cerveza!”

I walked closer,  tempted by the thought of a cold drink, which would also act as the perfect icebreaker to meet the girl.  I looked at her, asking if she wanted a cerveza.  She nodded yes, and I paid the guy for two Aguilas.

Sipping our cold beers, we walked further along the wall, engaged in standard backpacker dialogue.  Linda hailed from Germany, and was wrapping up a 3-month trip to Colombia.

As our beers ran dry, we descended the wall, and sought shade in the Parque de Bolivar (note: every Colombian city has a park named after Senor Bolivar, which usually includes a statue of him on a horse).  Lunch consisted of arepas con queso, chicken empanadas, and tintos from street vendors. 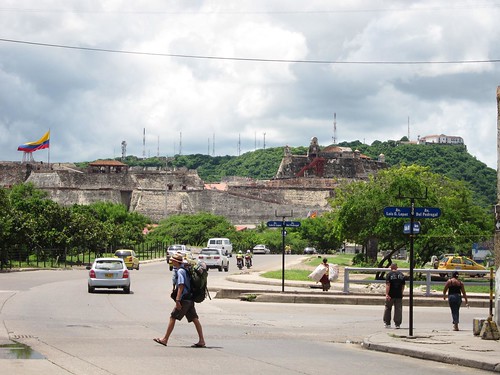 Walking Las Murallas was one experience I missed last year, and visiting the Castillo de San Felipe de Barajas was another.  An imposing stone fortress built upon a hill, it promised great views of the city, and a terrific photo-op with a giant yellow, blue, and red Colombian flag.   In a country without a universally recognizable tourist attraction, the giant flag was the best symbol of the country I could come up with.

Linda and I walked out of the old city, through Getsemani, and over to the old castle.  The entrance fee was a stiff $8, however we both agreed it'd be worth it.  Views from atop the castle are sweeping, and while you can see the sea, they skyline isn't particularly picturesque.

I would still recommend visitors pony up the money, as wandering through the underground tunnels in near darkness, and hanging out up there is a quiet diversion from the bustling streets below. 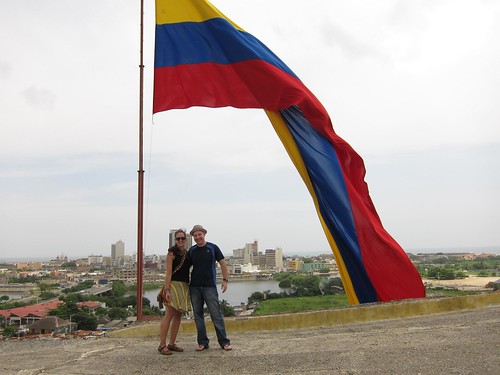 Linda (Germany) and I under the fort's giant Colombian flag.

I kept Linda company over a few more beers back at my hostel, before she had to catch an overnight bus to her next destination.  She reminded me (yet again) of how often I meet people when I least expect it.

By the time Linda left, and I had a chance to look in the mirror, I realized every uncovered part of my body was the color of boiled lobster.

Although I would've preferred if you went into a little bit more detail, I still got the gist of what you meant. I agree with it. It might not be a popular idea, but it makes sense. Will definitely come back for more of this. Great work

Between me and my husband we've owned more MP3 players over the years than I can count, including Sansas, iRivers, iPods (classic & touch), the Ibiza Rhapsody, etc. But, the last few years I've settled down to one line of players. Why? Because I was happy to discover how well-designed and fun to use the underappreciated (and widely mocked) Zunes are.

I'll gear this review to 2 types of people: current Zune owners who are considering an upgrade, and people trying to decide between a Zune and an iPod. (There are other players worth considering out there, like the Sony Walkman X, but I hope this gives you enough info to make an informed decision of the Zune vs players other than the iPod line as well.)