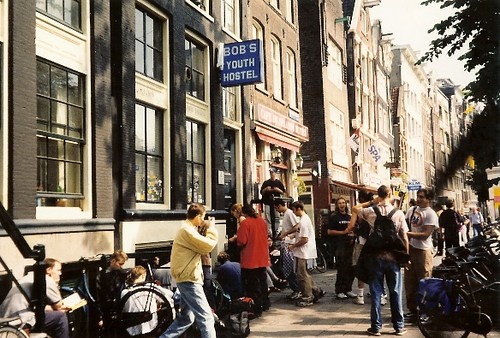 In honor of my parents current vacation in Belgium and The Netherlands, I am posting three journal entries from my time in Amsterdam. The following entries were written July 14-17, 1998.

We got to Amsterdam exactly on time, 9:20 PM, Monday night. The train station had plenty of backpackers. Sam is having trouble getting money. We have to figure out how to use the damn phones. We found a hostel in the Red Light District with one room left. Coffee shops were everywhere. We dropped our stuff off, and hit the town. The streets of the Red Light District were truly ablaze with a neon red glow, emanating from the lights installed in the prostitute's windows. We walked around the District. There were some good looking women in the windows, but none on the street. Most of the businesses seemed to close at 1 AM. The only loud bars were gay, Jaques and the Cockring. We went back to the room where I drank a bottle of red wine and slept.

We were awoken at 9 AM by two guys who busted into are room and said “you've got one hour to shit, shower, and shave.” We got our egg and bread breakfast downstairs, then set out toward Bob's Youth Hostel. We got there and got a room before noon. It filled quickly. While we were waiting for all the rooms to be cleaned, we went to the Hootsie Tootsie coffeehouse. The coffee we got was in a cup the size of a thimble, and it was so strong! You could practically eat the grains of coffee. The woman there gave Bill an orange for free. Later, when Sam asked for one she seemed to take offense by saying she was doing us a favor by giving us one. I also tried to find out what was in the “smart” drinks, apparently liquor and something (that came in three different colors). Bob's is nice, dormitory, cheap, friendly, popular. The toilet is weird though: your shit falls onto a plateau, and then when you flush, it goes down. The result is you sitting on top of your shit and toilet paper until you are ready to flush. This seems like a very smelly way to do things, but I guess it saves water.

Today, we slept till 10 AM, when they woke us up to clean the rooms. The free breakfast was OK. Last night we met a girl named Rebecca, from our hostel, who was quite friendly. She joined us for our evening. We went to the Jolly Joker after short stays at a few other places. I liked this coffee shop a lot. We sat at the bar and watched the bartender explain the effects of eating/smoking hash to a couple of tourists. 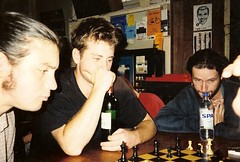 Well it has also been fun hanging out down on the first floor of Bob's: $1 Heineken's is good with me (later I find out it is much cheaper to just buy them at the nearby supermarket). We ventured down to the Heineken Brewery this afternoon, but the tickets normally sell out by 11 AM so we decided to go tomorrow. We then went to the Vincent Van Gogh Museum. House of Arles, Sunflowers, and Wheatfield With Crows, among others were my favorites. We then went back to the hostel, where I went to the bathroom. I'm starting to adjust to my European diet, and I probably should start eating more to stay feeling well. Finally, Dave, Sam, and I went to the Magic Mushroom Gallery. They had lots of weird herbal drugs, like powder that you snort like cocaine. It was all legal though, and I guess there is a demand? We also went to one of the Sex Museums. It was a novel idea, I guess, but not too interesting.

Today I went down to the Heineken Brewery at 11 AM in order to get tickets for the 2:30 PM tour. After that, I went to the Rijksmuseum. I was able to get through the whole museum in 1 1/2 hours. The Nightwatch by Rembrandt was interesting. There were also several Vermeers. Paintings are much easier to appreciate in person, especially when it comes to size and color. The doll houses were interesting: miniature paintings, china, carpets, and furniture. There was some Renaissance art, but no artists I knew. Also, the minute I stepped off the trolley this morning, I felt diarrhea coming on. I immediately searched for a restroom , and luckily found one at a McDonald's. They didn't have any toilet paper, but I had a napkin in my pocket.

The Brewery tour was great. They no longer make beer in the building, so you can't see the actual process. Instead, they had a multimedia presentation that was, at times, very funny (unintentionally). After that, Dave, Sam, and Eric went to the Magic Mushroom Gallery. That night I was very happy. We went to a club called 114, which had a cover, and sucked (empty). We also went to the Doors coffee shop, Baba's, and the Whootsie Tootsie again. At the last place, we got there 20 minutes before it closed. There was a crazy bartender there. He had the build of Jean-Claude Van Damme and the long, curly hair of (?) someone else. He welcomed us with handshakes, and another guy asked where we were from. Obviously, we had found a local bar. It was definitely nicer than the other, more touristy places. I love Amsterdam. The women are all skinny and cute. Almost everyone speaks English, and their pastries are great. Tonight we saw four drunken people box in a taxi, while on their bikes on a narrow back street. I thought it was adorable. 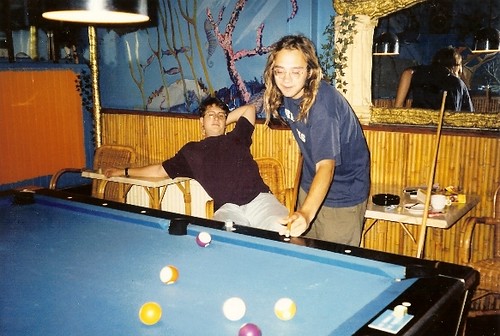 We planned on taking a night train to Prague today (Friday). This meant we had the whole day to kill. We went to a coffee shop called the Dolphin's Smile, where they had painted the walls in an appropriate way for the theme. After being driven out by the horrible music, we went to the Cafe Chocolate where we got some chocolate cake (what else). We took our pieces and ate them while sitting out on the sidewalk tables. We left before I got to check out the skateboard park. I did see one group of kids backpacking with their skateboards. And, I did get to meet some interesting people. It was hard to sleep on the night train, since we were upright. I was really tired, too.

Postscript – Bob's was truly the first hostel I had stayed at in my life. It's where I first experienced hostel and backpacker culture.

Hi all! So i just wrote this quite old article, since i was checking out what to do next week while i will stay just for two nights at a cheap hotel in the middle of the centre. Indeed 7 days might be a bit long, since Amsterdam is not super huge. i would recommend myself to go a bit outside the bussy streets then a entire new city will open for you. The Real Amsterdam.

Amsterdam was sensory overload for us 21 year-olds. I probably wouldn't have experienced it in the same way if it weren't at the start of my first independent trip to Europe, the time when I was touring with my friends.

I loved the way it was portrayed in the movie "Eurotrip!"

I was just in Amsterdam a couple of weeks ago for 4 days, I had a blast! It's such a lively city and well I don't have to tell you how much there is to enjoy ;)

Hope your parents had a good trip!