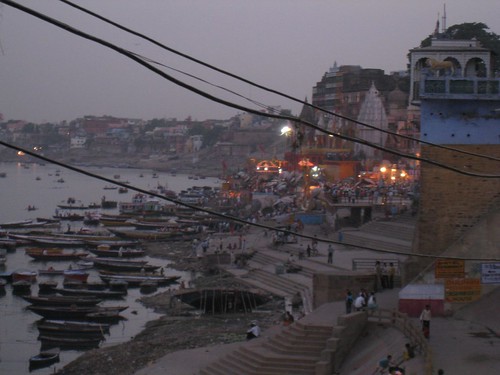 Benares (Varanasi) is older than history, older than tradition, older even than legend, and looks twice as old as all of them put together. — Mark Twain 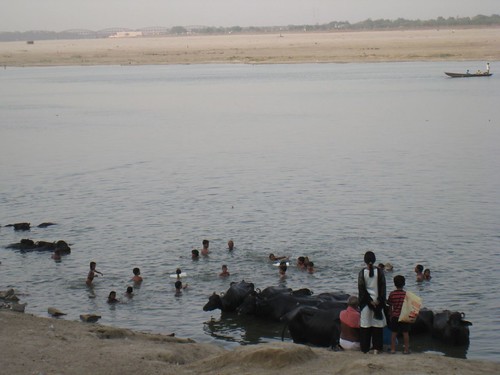 After 6 hours of intentional confinement to my air-conditioned hotel room, I felt it was time to see Varanasi's main draw, the ghats which run along the Ganges River. In my mind, I had pictured the dirtiest, darkest, smelliest, smokiest hell on Earth type of atmosphere. After all, according to The Lonely Planet, ” the water is septic, no dissolved oxygen exists”?, and ” the water has 1.5 million fecal coliform bacteria per 100mL of water”? whereas safe bathing water should be less than 500. 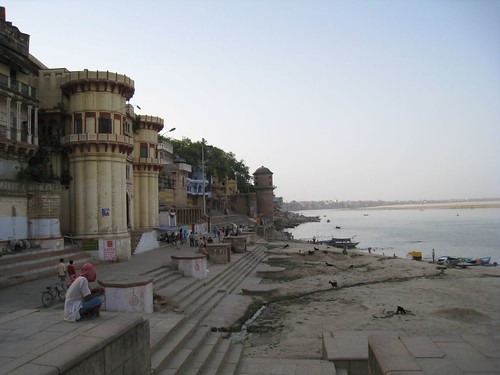 In reality, as I walked out of an alley onto Assi Ghat, the furthest south of the main ghats, I was surprised by the serenity of my surroundings. Boats were floating along the river and people were simply hanging out. I began to walk north, declining boat ride offers with politeness. A young kid struck up a conversation with me, and invited me for a chai. As I sat there burning my tongue on the hot tea, I must admit I was wondering if it had been somehow spiked with a drug, and I was about to keel over and be robbed. Such are the worries of the single traveler who stays open to the kind offerings of strangers. Shortly after taking tea, the kid waved goodbye to me which was the sign that his company had been genuine. 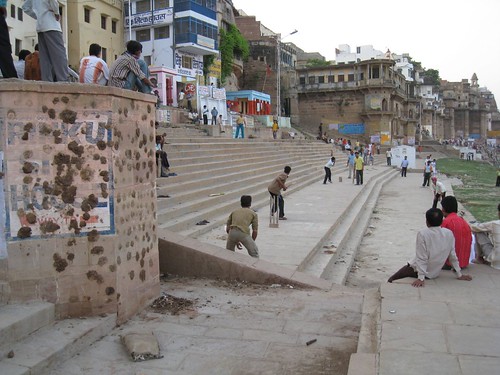 I continued to make my way north past kids playing cricket, water buffalo bathing, people of all ages swimming. I sat by one of the smaller burning ghats for a short explanation of the cremation process from another local. When he turned to the topic of touring nearby silk factories, I made my retreat. 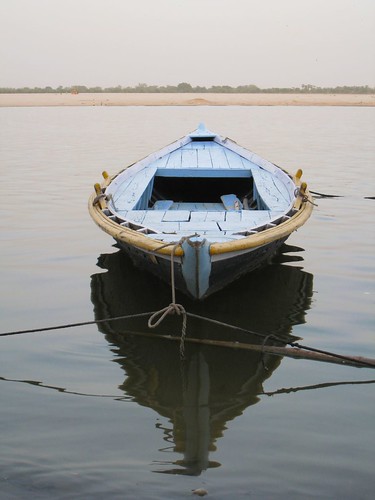 As I neared Dasawamedh Ghat, home to most of the boats and a nightly ceremony, a young kid struck up a conversation with me. I clearly told him he could walk with me but I would not pay him anything. He proceeded to walk me down to Manikarnika Ghat, the biggest cremation ghat. He showed me up to a balcony overlooking the site, meant specifically for tourists (as the family occupies the space at ground level). After a few minutes of watching multiple pyres burn, we headed back toward Dasawamedh for the nightly puja. For 5 rupees (12 cents), I bought a candle with flowers and set it adrift on the Ganges (earning me some good karma in the process). A crowd of mainly Indian, with a sprinkling of Western, tourists had gathered. 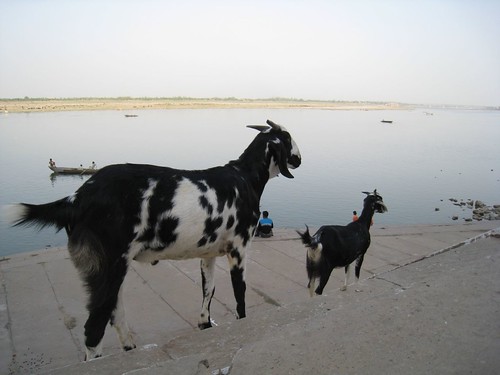 The ceremony and music seemed interesting enough, however by 7:30pm, I was sapped of energy, and tired of wiping the sweat from my brow. My young tour guide was keen to show me his silk shop, however I continued to decline in favor of an autorickshaw back to the hotel (and a cold shower). I gave the kid a generous tip in the end. Despite his efforts to get me in a silk shop, he was quite helpful. 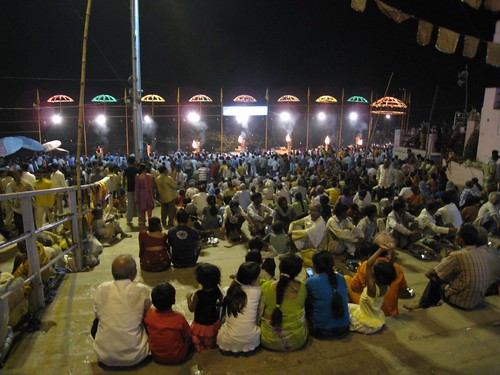 I agreed on 100 rupees for my rickshaw ride back to the hotel, which I knew to be too much but seemed to be par for the course in Varanasi (for this tourist anyways). When we got going, I noticed the driver was someone other than who I negotiated the price. I didn't think anything of it until we were outside my hotel and he was demanding 150 rupees. I scoffed, and stood my ground. He asked for 120 and I paid it to be done with the situation. While fifty cents means more to him than me, I'm not immune from getting pissed off about the principle and dishonesty in such situations. It is no wonder Varanasi (and India as a whole) has a reputation for tourist ripoffs.