Colombia's proximity to the Equator lends many visitors to believe they can go anywhere in the country wearing a pair of shorts and flip flops. These people fail to account for the mountainous terrain that covers a good swath of the country, including Bogota and El Cafetero, the coffee region. 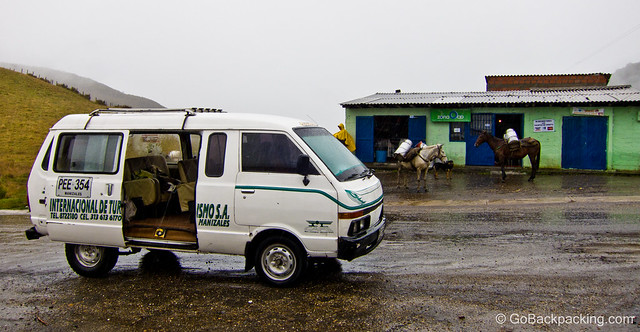 Manizales is a small city built on hillsides, a five hour bus ride south of Medellin.  Situated at an altitude of 2,100m, it is the main jumping off point for trips into Parque Nacional Natural de los Nevados to see the mighty, snow-covered Nevado del Ruiz volcano.  The 5,300m volcano is even high enough to have a few glaciers.

For most Colombians, a day trip by minivan to the park is the most accessible, affordable opportunity they will have to experience snow.  For tourists, there is an undeniable novelty to seeking out snow in a country so often associated with tropical beaches and jungle. 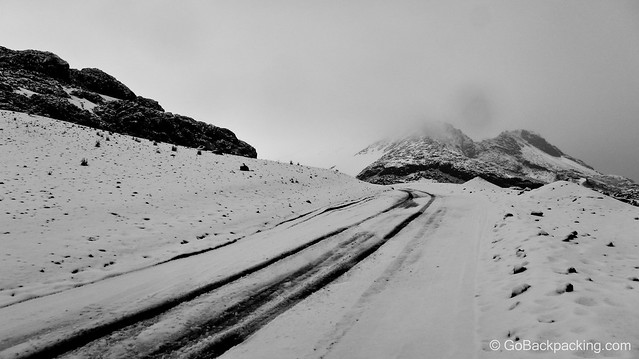 I arrived in Manizales and took a room at the new Base Camp hostel, which on a clear day, has a direct view of Nevado del Ruiz from the rooftop bar.  I was in town not only to see the volcano, but to hit the 5,000m mark in altitude.  It was to be a new high for me (my previous record being 4,330m in northern India).

Unfortunately, I was quickly informed that due to recent seismic activity, the highest we would be able to ascend is 4,800m.  I was bummed, but wanted to make the best of the situation.

I awoke bright and early at 6am the next morning to zero visibility, and pouring rain.  I debated whether to delay my trip and try again the next day, or go, and cross my fingers that the visibility would be better at the higher elevations.  The low season meant rainy days were the norm, so for all I knew it could be raining the following morning too.  On the flip side, rain in Manizales equals snow in the mountains, and because the Colombians are there for the snow, they're not about to be picky about visibility, and neither was I. 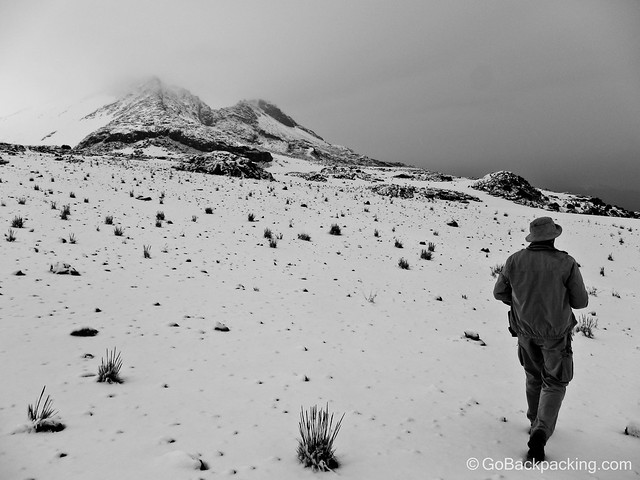 A professional photographer from our group walks through the snow, trying to get a few good photos.

My group included four women from Cali, two women from Bogota, a professional photographer from the Dominican Republic, and me.  Our driver spoke no English, so many of the details he shared during our trip were lost on me.

On our way out of Manizales, we picked up some snacks and water.  Even though we were driving instead of hiking, it was still important to respect the high altitudes we would be experiencing.  The ride into the mountains was drab, with clouds obscuring what I imagined to be beautiful scenery.

At 7am, we stopped for breakfast at a small restaurant (3,760m), the rain still pouring, and the temperatures cold enough for me to be shivering.  I was wearing a motley assortment of clothes, including a wool cap from Darjeeling, a Khmer scarf from Cambodia, and the GoLite hoodie and jacket I'd reviewed on this blog earlier in the year. 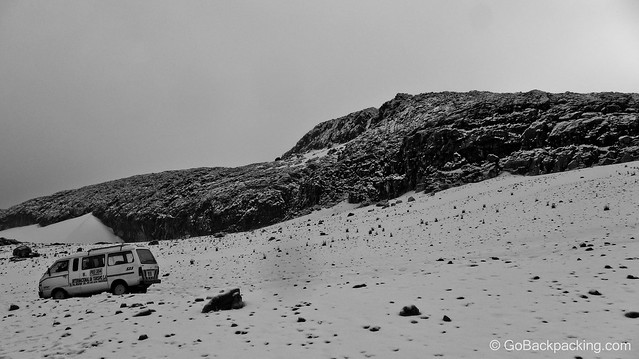 Breakfast was basic, but large, consisting of eggs, rice, bread, an arepa, a massive chunk of cheese, and the local (unsweetened) hot chocolate, which I immediately fell in love with.  After gobbling it all up, I walked up a small flight of stairs to use the restroom, and it was then that I felt my heart beating noticeably harder from the altitude.

Back in the minivan, with its bald tires, and barely functioning heat, we drove another 15 minutes to the entrance of Parque Nacional Natural de los Nevados (4,050m).  A sign indicated there were bears and pumas in the park.  We went inside a small building and were given a presentation in Spanish, and then it was back to the minivan. 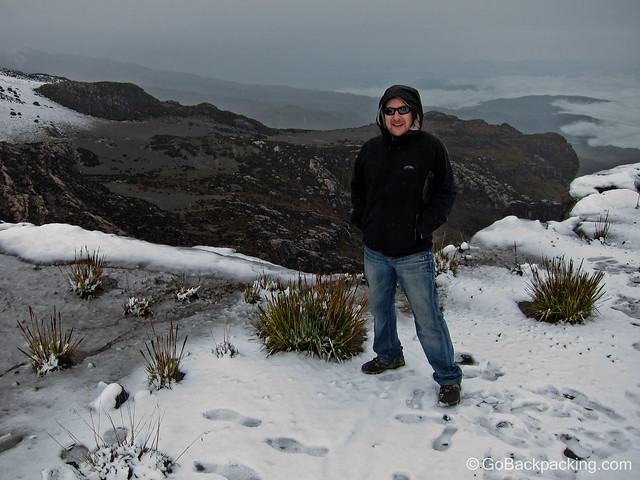 Standing on the edge of a large cliff.

It's always interesting to see how the vegetation changes as you increase your altitude.  Add to the mix a volcanic environment, versus regular mountains, and the landscape quickly became other-wordly.  We hit the snowline almost immediately after entering the park — glaciers visible in the distance.  The rain turned to a wintry mix, and the paved road came to an end.

Our minivan was ill equipped for normal roads on a sunny day, let alone volcanic terrain covered in snow.  At about 4,300 meters, it could go no further.  This happened to be the same altitude I reached in India, and thus I set no new record for myself.

We exited the minivan, the Colombians making snow angels and taking lots of photos of each other playing around.  The crater we had the best view of was not the big one, Nevado del Ruiz, but was sufficiently cool to satisfy me.  The heavy cloud cover meant our views were limited.  The dreariness of the weather matched that of the environment – dark, dull, moody.  Vegetation had been reduced to small clumps of grass. 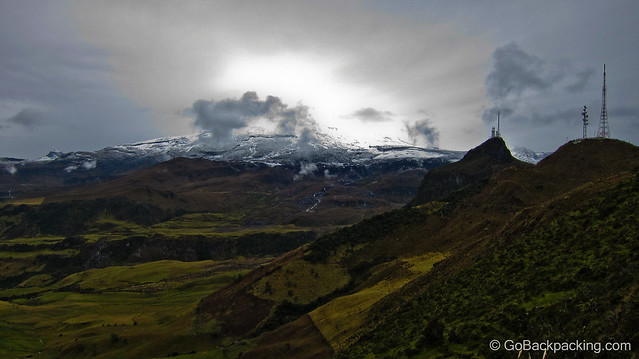 It wasn't until our way back down that the skies began to clear, and we managed to get a decent look at Nevado del Ruiz.  We stopped for lunch at the same restaurant where we enjoyed breakfast, only by now it had stopped raining, and warmed up.  As we continued down to town, the sun emerged, burning off the clouds and lighting up the green mountains all around us.

Great, i will go here! Have you seen the ghost town not far from the volcano?

Ghost town? Nope, didn't hear about it, but I missed a lot of what the Colombian tour guide was saying.

Hahahaha, I totally thought you meant a different snow! ;-)

It doesn't take much effort to find the other kind of snow ;)

Wow, that's around 15,000 feet and you did this without oxygen? The general guideline I've heard is that if you go above 10,000 feet you need oxygen. Did you do the thing where you chew on coca leaves to help alleviate altitude sickness?

Also...are Colombians really so amazed by snow that they're willing to go through all this trouble just to see it? :D

Seems like it would almost be easier to just take a flight to Canada in January or something, lol...

No, plenty of normal people trek at higher altitudes than 10,000 feet without oxygen. It's probably at least double that before oxygen masks enter the picture, unless there is a health issue with the person. We did drink some tea after breakfast that had some local herb in it that's suppose to help with the altitude, but as we were in a van the whole time, it wasn't a very difficult experience.

And yes, the Colombians I was with were loving the snow.