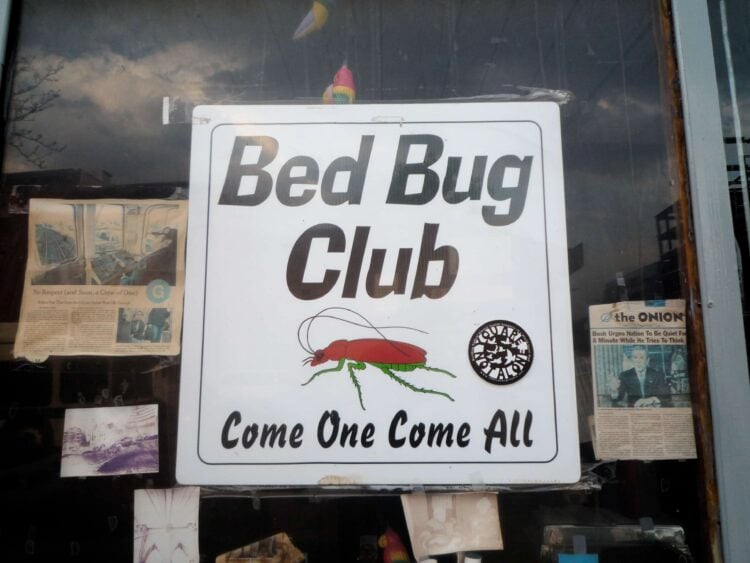 I can finally admit it…I got bed bugs once! One of the worst things I have ever had happen to me while traveling, and I guess maybe if you travel long enough, it's bound to occur.

I wasn't sure about writing this story because frankly it's embarrassing and I felt so skanky after it happened, but six months later I can now emotionally deal with the issue (or at least that's what my therapist says).

Below is what I wrote six months ago while waiting at the train station to leave Chiang Mai for Bangkok, Thailand.

Steve is the guy who I was doing photography work within Bangkok.

“Today has been a new one for me here in Chiang Mai. I came up here with a friend to shoot some photos of the area.

We had been staying at a recently renovated hotel called The Mercure and were using it as a base for going out to sites in extreme northern Thailand.

We had gotten to Chiang Mai late evening, and for 800 baht per night ($22.50), it came with four stars and breakfast.

Usually this would be over my budget, but Steve wanted to stay there because he knew a friend who was a teacher from Bangkok that was bringing her class, 100+ students, to do a music show there for a week.

She made all the arrangements, and we were given the same discounted price as the school was getting.

So for a little more and being such a nice hotel I was ok with it.

After all, I thought it's ok sometimes to splurge and not stay in a $5, steamy hot, hostel room.

The second night we went to the night market and shot the flowers there, which Chiang Mai is known famously for.

Steve wasn't up for much walking that night, and since it was my first night out, I went out on my own to see the rest of the market.

I got rained in and took cover at a little bar for a few hours, then made my way back to the hotel.  It put me back kind of late but overall I had a good night and got some great pictures.

The next morning, I woke up with a whole bunch of sores on my upper body.

Mainly along my arms/back and to me it looked like mosquito bites.

The thing that got me was that the night before I never really remember the little zappers bothering me much.

They itched like hell the next morning, and I decided I would take some precautions when out at night again (something I hardly ever do).

I told Steve about the bites that morning, and he said maybe they were bed bugs.

Never really thought it was that but that night while laying in bed it had me freaked was I sleeping with a 1,000 little body munchers???

It freaked me so much that I ended up sleeping in my clothes that night and every time a hair on my body twitched I was turning on the light.

Made for a long night, and the next day, I just chopped it up as a “Steve story.”

We got out early the next day and headed further north to Changi Rai and spent the day shooting The White Temple (fantastic place by the way!).

Got back and had a ton of pictures to edit.

When done I decided to watch a season of Dexter and hit the sack.

I'm laying there watching a movie on my laptop, and somehow I saw this little bug the size of a pinhead move on the bed (I guess I have 15/20 vision).

I got on all fours and scooped it up and put it into a glass. Was this me paranoid?

Had to find out, so I started tearing the bed apart, first the sheets, then the under sheets, pillows flipped, then flipped the bed too and after 20min I had eight bugs in my glass.

A few the size of a small ladybug but there isn't anything cute about them.

This was the evidence I was hoping I wouldn't find.

I knew 100% what had eaten me up two nights before.

I went into the bathroom and started counting the bites stopped at 98!!!  I wasn't so much mad as I didn't want to be there.

I planned to go to the hospital and confirm for sure what it was, then confront the hotel about it the next day.

One thing for sure was that I wasn't lying in that bed again.

Stayed up for as long as I could but couldn't make it and ended up curling up in the corner of the room, on a chair like a crack head, using a bathrobe as a blanket.

I felt like some bum on the street in my hotel room that I was paying good money for the night's stay.

Called Steve the next morning in his room and we went to the hospital.

Within 5sec, the doctor confirmed what I thought.

She told me things like this happen but not to worry, as they carry no diseases that I wasn't already vaccinated for.

Total cost for doctors visit was about 500 baht ($15), and with the cream and meds she prescribed for me, it came to about 1,500 baht ($42) total.  Pretty cheap doctor visit and was happy about that.

Went back to the hotel and Steve told me the hotel would pay for all the doctor costs and move me into a new ” clean”? room.

Screw that I thought!

You don't eat twice at a restaurant that gets you sick, because if it happens again, it's your fault for knowing.

I loaded all my clothes into one bag (had to get them all washed with some scalding water, as I had bought some new ones on the way back from the hospital) and was ready to get out of that place.

Steve kept trying to get me to stay, but what sane person would and in the end, I decided just to leave and head back to Bangkok early.

We were supposed to leave the next day, but I didn't see the point of renting another hotel room (no way in hell I was staying in that hotel another night) to ride back with him.

So as I write this now, I'm at the Chiang Mai train station and getting ready for an overnight train ride in a seat.errrr!

It's going to be murder, but a seat was all they had left, and the thought of sleeping in my safe bed was enough to merit the cost.” ~ Written May 29, 2009

I hope this doesn't discourage people from traveling.

I have been on every continent in the world (except for Antarctica), stayed in some nice hotels to some dodgy hostels and this is the first time anything like this has happened.

It happened in a place I thought it wouldn't as if it had occurred in a $4 hostel bed I could at least say it was a cheap room and that's what I get for being cheap.

It won't stop me from traveling, but I think I'll invest in a silk blanket to give me a buffer zone.

The joys of traveling outweigh anything like this, but it's not something I want to experience again.

The worst part for me wasn't the scars I had to wear for a month…it was the physiological part that took hold of my mind.

I didn't sleep in my bed back in Bangkok for the rest of the time, and it did take me about three months before I could get a good nights sleep again.

Hey! What did you do with your luggage? What would anyone else recommend? I have two suitcases and a serious bed bug paranoia about ever bringing them back to the uk!

Are there any sprays that we can use to spray the mattress ?

Just back from Thailand, one of the islands, and I got over 208 bites in two nights, still trying to get rid or the bites, tablets and cream from the hospital, and it is nasty. My wife and I slept in the same bed, but only myself got bit ? Going to be boiling every bit of clothing we brought back, worn or not. Nasty nasty nasty !

Bed bugs are really annoying.  They should all be eradicated.. - Tracy

This experience is an eye-opener to many travelers, i suppose. Even the cleanest hotels can still have the most infested beds. Since these bugs cannot be easily seen, many unsuspecting tourists have fallen prey to them. But one good thing that travelers can do is to bring bed bug patches or mattress covers to protect them from bed bugs.