My inspiration for visiting Bratislava, the capital of Slovakia, was to relive the scene above from one of my favorite travel movies, Eurotrip.

It's not the first time a movie has inspired me to visit a new place.

The Beach lead me to Maya Bay in Thailand, and I relived Swingers at The Dresden in Los Angeles. 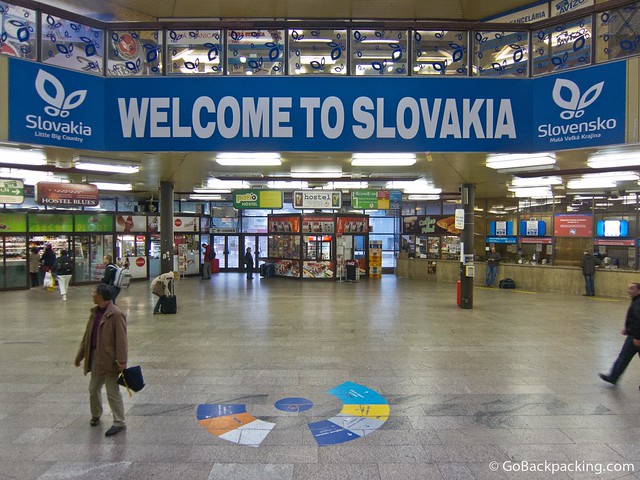 A warm greeting at the Bratislava train station

Unfortunately for Bratislava, I was visiting as Winter was rearing it's grey and chilly head.

After taking a short train ride from Vienna, I was greeted with a giant “Welcome to Slovakia” sign at the Bratislava train station.

On a tight schedule, I immediately decided to allocate just one night in Bratislava and proceeded to make the most of it. 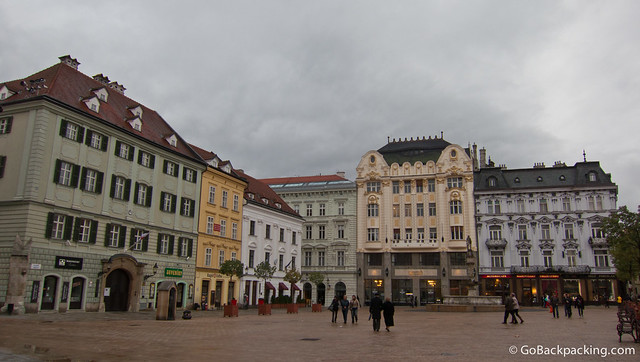 I dropped off my stuff at a guest house, picked up a map at the local tourism office, and began walking around the medieval city center.

According to Wikitravel, many of the buildings have undergone renovations in recent years. 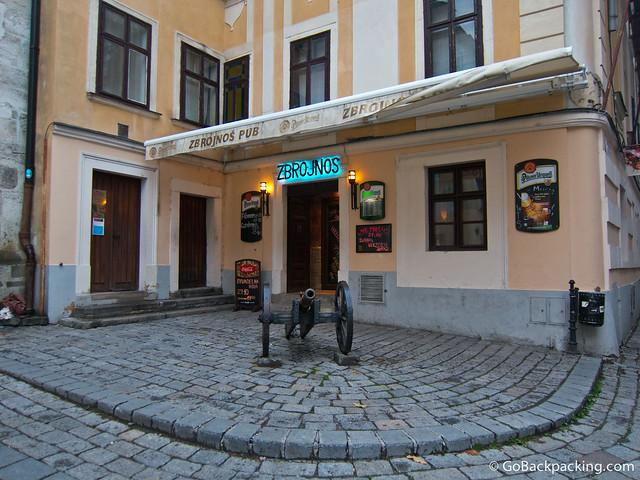 Pub in the city center

As I walked around, I couldn't help but note all the bars. Despite the dreary weather, I had to cut Bratislava some slack.

The historic center had the potential to be a lot of fun during the warmer months of Spring and Summer. 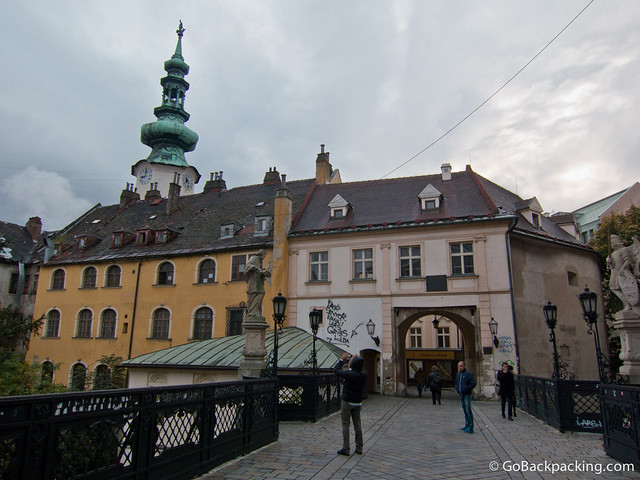 One of the more interesting vantage points

Short on time, I didn't even make an effort to visit Bratislava Castle. Dating as far back as 907 AD, it's situated on a hill with a commanding view of the city.

Instead, I wandered the streets, looking for interesting photos. 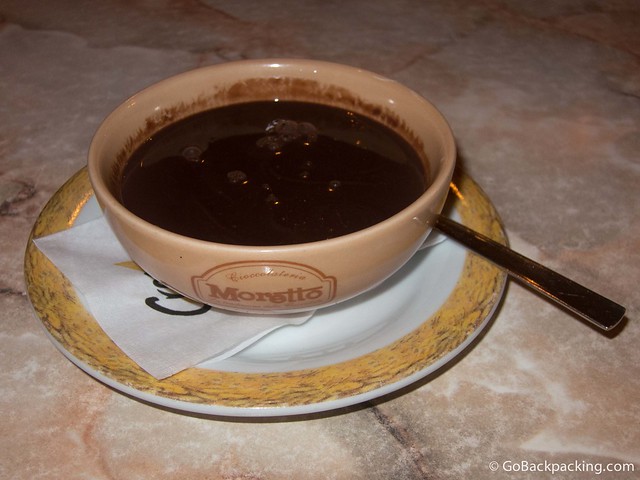 Eventually, I wound my way back to the central plaza and popped into a crowded cafe as the sun began to set.

A long list of hot chocolate variations filled a page of the menu. I kept it simple, opting for a classic hot chocolate.

The consistency was thick and rich. Heavy on the chocolate and milk, or maybe it was cream.

When I asked my waitress for a restaurant recommendation, somewhere I could get authentic Slovak food, she pointed me next door. 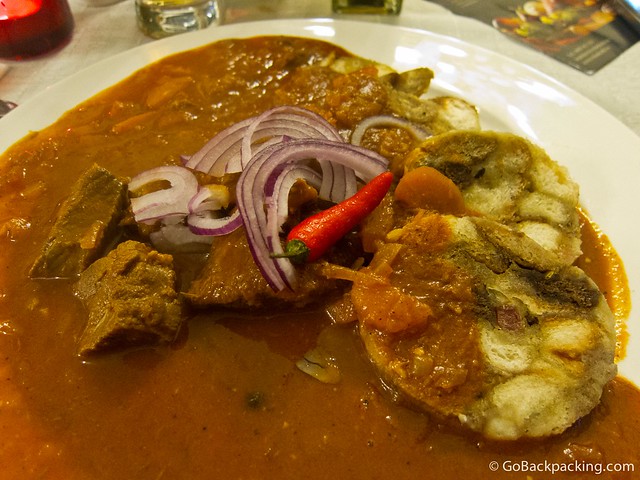 Goulash of deer meat with thyme and homemade dumplings

The restaurant, also overlooking the main plaza, was practically empty.

I ordered the goulash of deer meat with thyme and homemade dumplings.

The presentation, akin to slop on a plate, left a little to be desired, but the actual flavors and meat were delicious. 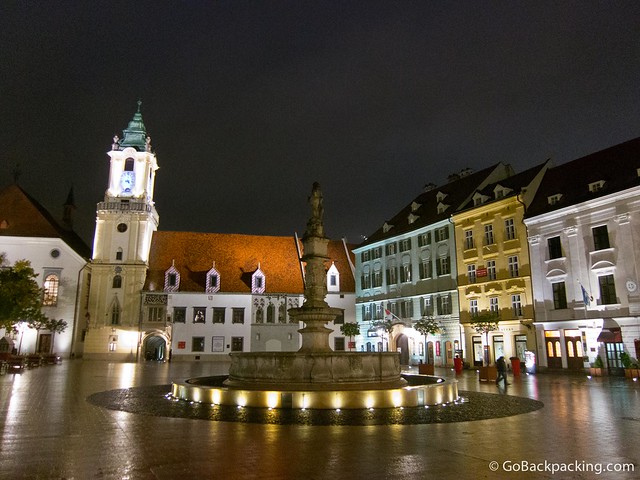 St. Clare's Church and the central square lit up on a cold and rainy night

By the time I stepped out of the restaurant with a full belly, it was completely dark. The colorful buildings of the main plaza, including St. Clare's Church, were nicely lit.

I walked back to the guest house, anxious to board a train to Budapest the following day.

My travel to/from Bratislava by train was made possible by a Global Eurail Pass, courtesy of Eurail.com.

Thanks for that Dave, i was on my way there with a friend a couple of years ago for a long weekend from the UK. She decided she needed to buy some perfume at Duty Free put her passport and ticket down, she couldn't remember where it was and we missed our flight!!

My first trip to Bratislava was back in 2008. We stayed at the Carlton may have even been in the square from the top picture on your blog if you looked left. It was a unique experience because that night at my hotel they were having the "Slovak Oscars" or at least the equivalent. There were all sorts of Slovak movie stars and producers there. Really a unique and exciting experience! For some crazy reason I had a cowboy hat with me which was a hit...too bad I didn't take any pictures : (

Being named Scott, you know I am a fan of Eurotrip and the endless "Scotty Doesn't Know" jokes. Seriously though, even though it is a bit of a B-List movie, there is no question it played role in getting me to backpack Europe the first time back in '06. As far as Bratislava, sure looks nicer in person than the movie, eh?

Yes, though I read a comment on YouTube that the Bratislava scene in the movie was actually shot in the Czech Republic :)

Mmmm - the flavours in the that goulash sound delicious! I've found that presentation in the Eastern European countries can be very deceiving too.

My fondest memories of Slovakia are the castles. Spissky Hrad was oddly empty and glorious, and Bojnice and others look great too. Speaking of awful weather, I was walking around the town trying to find Spissky Hrad for half an hour because the fog was so thick I couldn't see it. Then it opened up and...inner 7 year old was happy. Good times.