It was all around us at TBEX in Girona, but my deep dive into Catalan Cuisine really began with the 3-day blog trip through Costa Brava which followed.

We had a busy itinerary, yet somehow there was always enough time for a multi-hour, multi-course lunch with bottomless glasses of wine.

Being a glutton never felt so good. And if ever there was a country worth getting to know through its food, it's Spain. 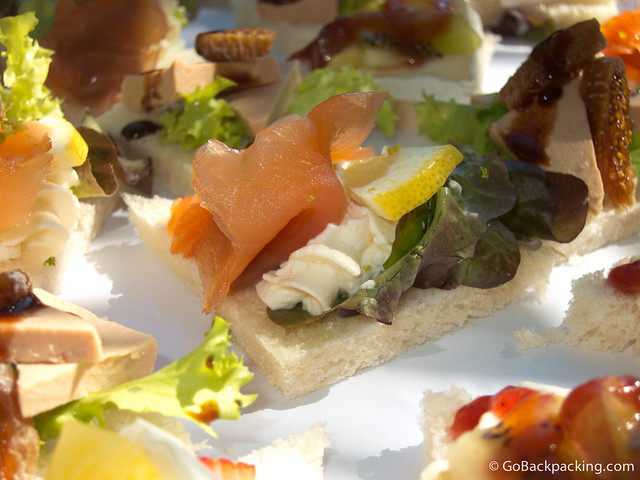 After touring Tossa de Mar, we sat down for a beachside lunch at Restaurant Madrugada, part of the Club-Hotel Giverola.

We were welcomed with a glass of sangria de cava, and a choice of canapes, like the salmon one pictured above.

Cava is a Spanish sparkling wine, their version of French champagne. 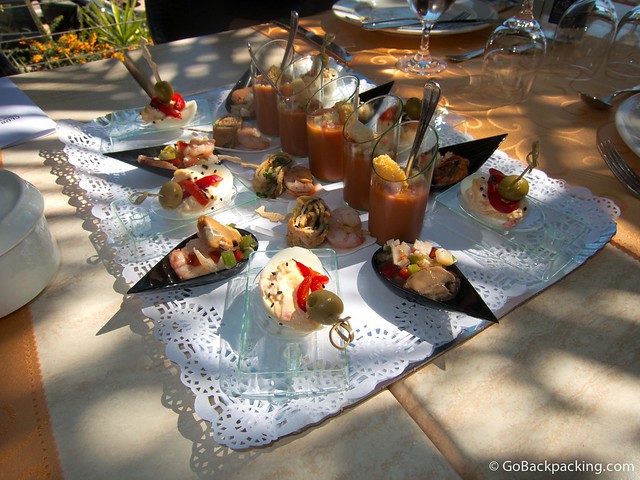 Every dish served showed a high attention to detail, and there were a lot of dishes that afternoon.

An array of sausages and cheeses arrived next. Cured meats, including sausage and serrano ham, are a staple in Catalan cuisine.

I only wish I were a bigger fan of both so I could appreciate them more. 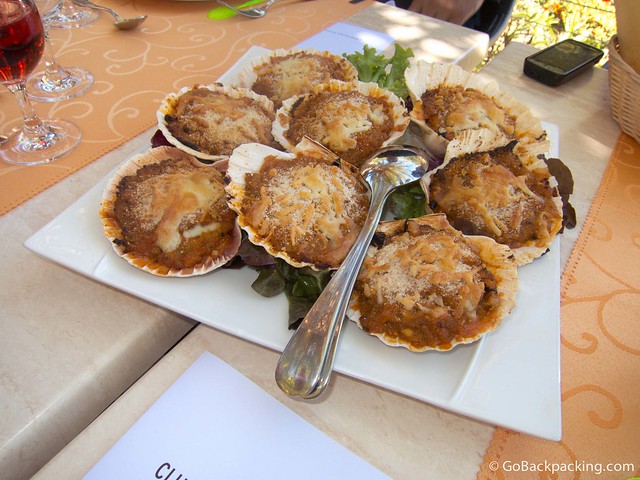 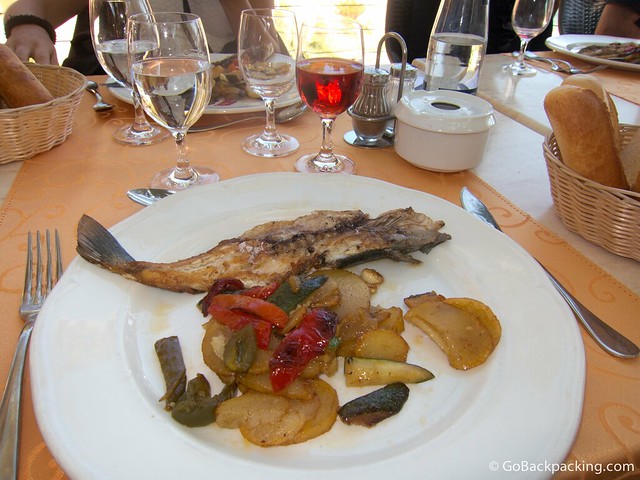 For the main course, we had a choice of either sea bass or duck. Seeing as how we were dining by the water, most of us chose the fish.

Dessert was a parfait of ratafia with wild berries sauce. The heat of the day had it melting on the plate before me, thus it looked like a big gloppy mess.

It tasted fine, but it wasn't very photogenic. 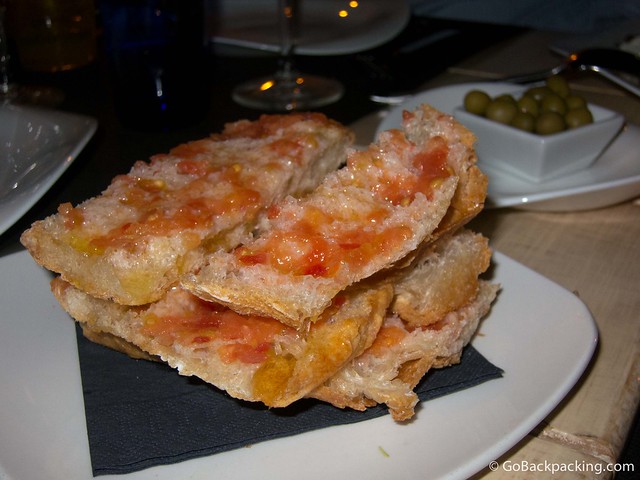 Later that night, we had another beachside meal. This time, it was dinner at the chic Restaurant Es Blanc in Blanes.

As often was the case, our meal began with olives and Spanish tomato toast, lightly toasted bread smeared with fresh tomatoes, and drizzled with olive oil.

A fresh, simple, tasty way to dress up bread. 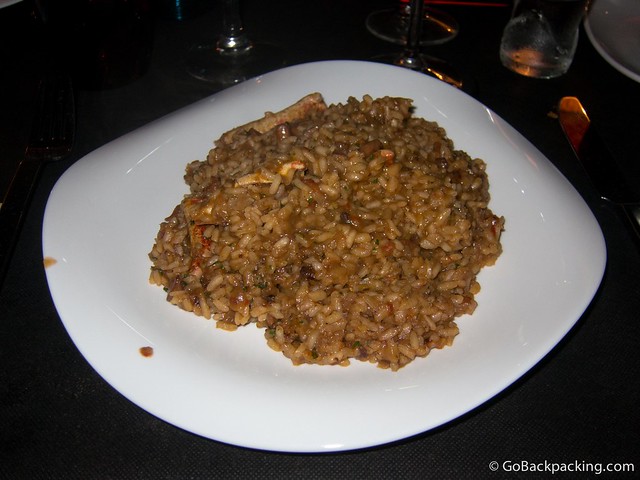 The rice with spider crab was a house specialty, so that's what we ordered. It's not the most photogenic dish, but it was full of flavor.

I much prefer to eat crab when it's removed from the shell, I'm not one of those guys who can sit down in front of a bucket of Maryland crabs and go to town cracking shells and sucking the meat out.

Es Blanc is also known for its wide array of gins. I had a gin and tonic with dinner, but can't recall which one. 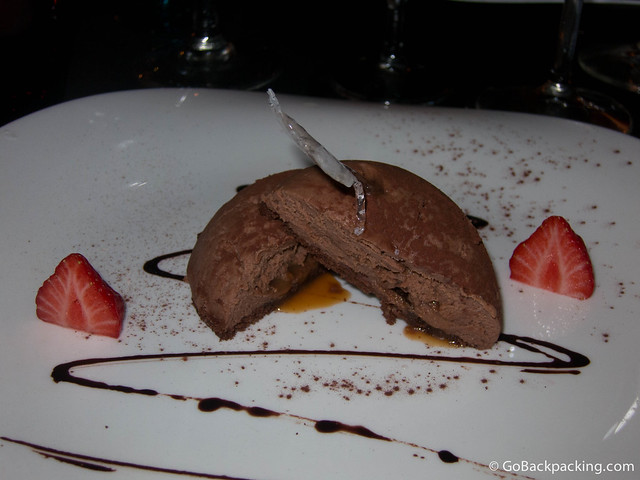 As if the two very large meals of the day weren't enough, I couldn't resist finding out was behind the “chocolate semi sphere” on the menu.

It's safe to say if I were living in Spain, France, Italy, or any other western European country, I'd be on cholesterol medication by now. 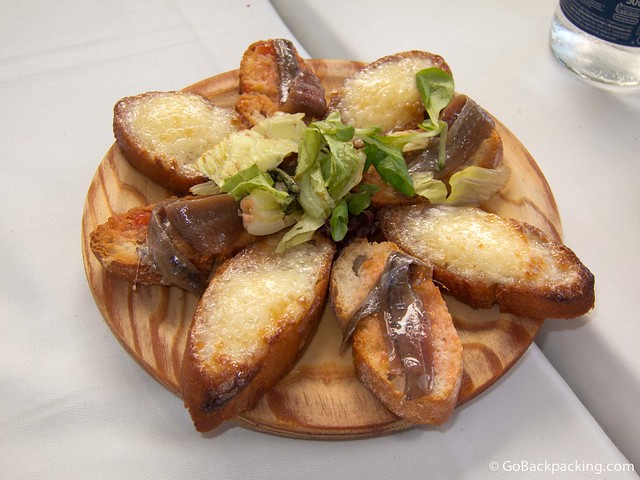 The following day, we headed to Lloret de Mar, one of the biggest beach destinations in Spain. It attracts something like one million visitors per year, which is hard to believe given how small it appeared.

Following a relaxed walk through the nearby Santa Clotilde’s Botanical Gardens, we settled into another big lunch at Restaurant La Mar Blanca. And this lunch happened to fall on my 36th birthday, making it a special occasion (at least for me). 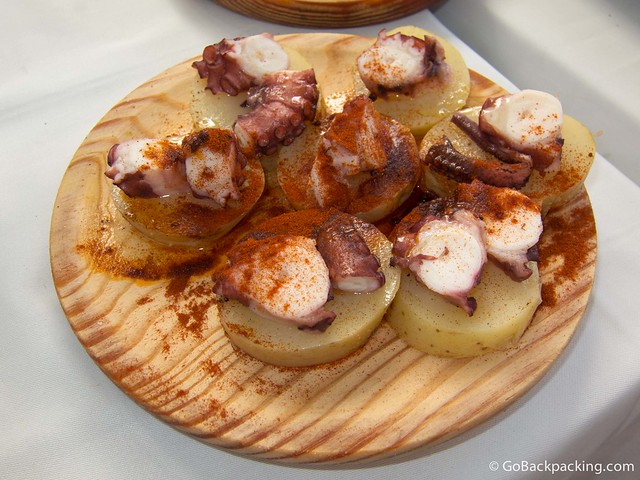 Before the main event, we were served an array of starters, including cheese bread with anchovies.

I would eat more anchovies in Costa Brava than the rest of my life combined. Seafood, if you weren't able to tell by now, factors heavily into Catalan cuisine, and I didn't want to miss out.

Another dish I normally wouldn't order, if left to my own devices, is octopus. But, the large meaty pieces served on potatoes turned out to be quite tasty. When cooked properly, I've found octopus to be a food I enjoy. 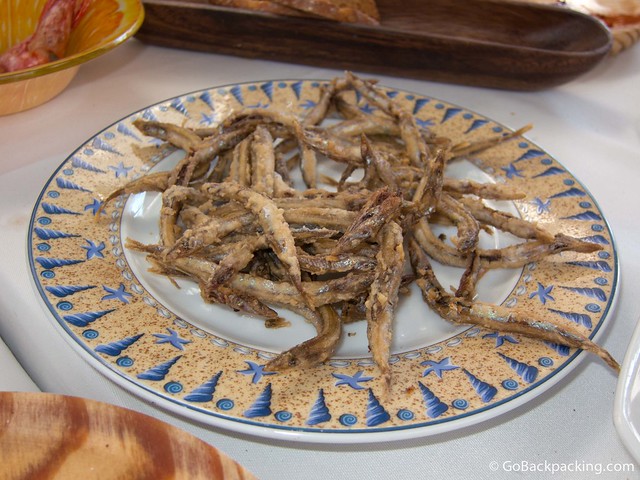 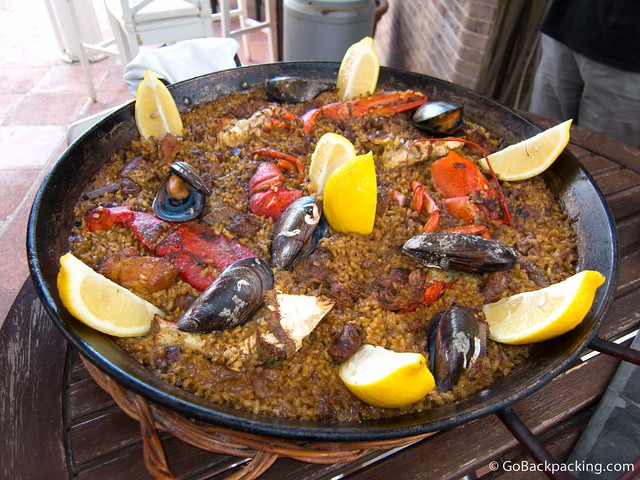 As I mentioned earlier, Spanish seafood paella was the main event. Cooked in a large, paella-specific dish, it featured fresh lobster and mussels.

Mouth-wateringly good, it's a wonder any of us were able to carry on with the rest of our day.

Did I mention we were all drinking wine throughout the service? 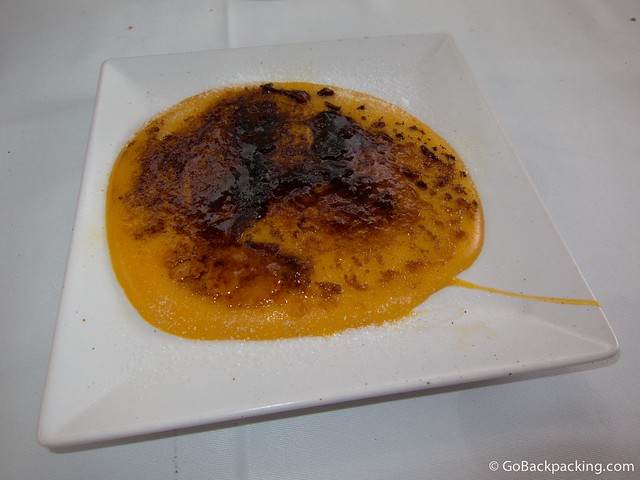 Dessert was a regional favorite, crema Catalana, which is a Spanish custard very similar to creme brulee.

And because it was my birthday, I was also surprised with a chocolate brownie immersed in whip cream, complete with candles. Yea, I ate that too. 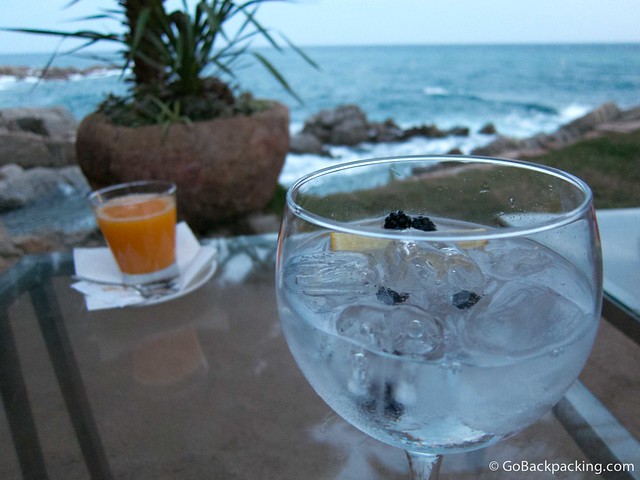 Gin and tonic with juniper berries

Later that evening, as the sun was setting, we rolled into Bar Cala Banys for happy hour cocktails by the sea.

We had the place to ourselves, and grabbed a table and chairs right by the water's edge. Waves crashing into the rocky shoreline below, we relaxed with our favorite cocktails.

I opted for a gin and tonic, which was served with juniper berries. I experienced this nice touch for the first time in my life a few days earlier at a bar in Girona. I've never seen it done outside of Spain. 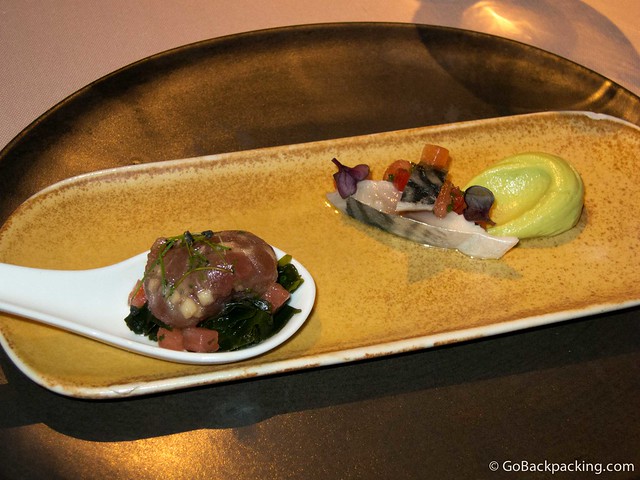 My 36th birthday came to a close with a 6-course, gourmet meal at FREU Restaurant in the Hotel Guitart Monterrey.

By this point in the day, and trip, I barely had room for another large meal, but I soldiered on. Luckily, the portion sizes were small. 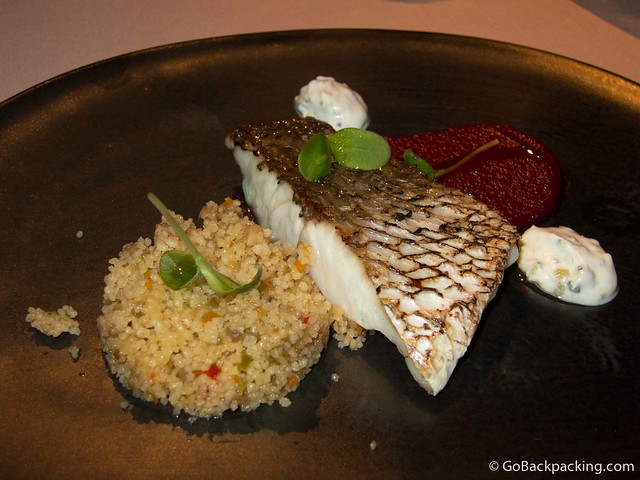 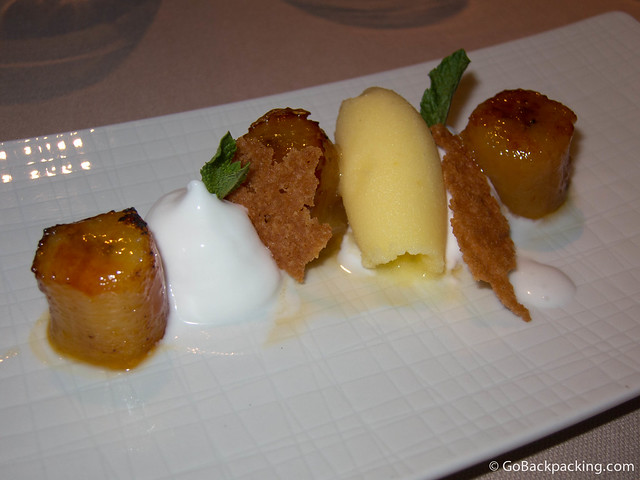 In fact, I even managed to gobble down another blogger's dessert, in addition to my own.

Believe it or not, there was still another full day to our trip, but I'm going to end this introduction to Catalan cuisine on a high note, or rather, a sweet one.

Have you been to Costa Brava? What's your favorite Catalan food or restaurant?

I visited these restaurants as a guest of the Costa Brava Tourism Board.

Ooohhh it all looks so yummy. So one night I was walking downtown in Rota and decided to stop at an ice cream shop. They had a "crema cataluna" flavor of ice cream. The dessert is awesome, so I had to try the ice cream. OMG...to die for! Really, everyone should try it!

Great place the Costa Brava!!!! I had great time two years ago, the food is excellent. i loved black rice and Pata negra ham. About ham I found very interesting information in this website: http://www.jamonarium.com/en/content/27-spanish-ham-pata-negra-bellota-serrano-iberico-iberian it's something big in Spain the iberico ham!!! About hte coast the best I saw was Tossa de Mar, I agree is a great place to stay. Enjoy your trips David!!!

Yummy! I would love to taste all the desserts also got curious what's inside the Chocolate semi sphere.:)

These dishes are death to eat!

It all looks so amazing! I absolutely love the food in Spain. It is always so fresh and fantastic. I am a huge fan of the serrano ham and the tapas and the fish and and and!!! That G&T by the sea looks amazing! Having such stunning backdrops always makes the experience so much more!