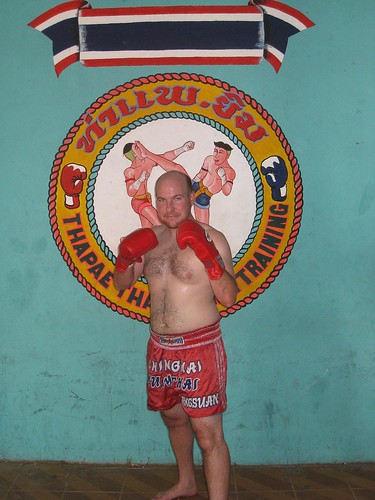 I dare you to take a Walk In Muay Thai class for one day. It will be the best workout of your life, and it is fairly cheap! Since you are in Phuket, may I suggest Rawai Muay Thai, or Tiger Muay Thai? They are the most Americanized. I'll buy ya a beer. 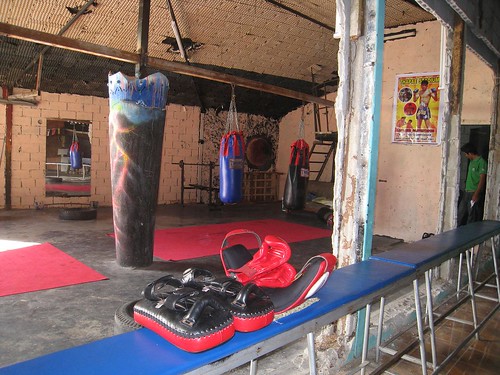 Jay's dare provided me with yet another experience I wouldn't have sought out on my own, especially given a complete lack of martial arts experience in life and an aversion for fighting in general. I first heard about muay thai boxing in the context of The Travel Channel's “5 Takes” show which sends 5 lucky travelers to a region of the world equipped with laptops and video cameras. The sporty guy on the show went through a 2-hour training, and now it was my turn.

A few blocks from Kent's Guest House was one of Chiang Mai's boxing stadiums (think boxing ring inside a large bar). Fresh from 6 hours of cooking and eating Thai food, I took on the dare knowing I'd have to work for that beer. 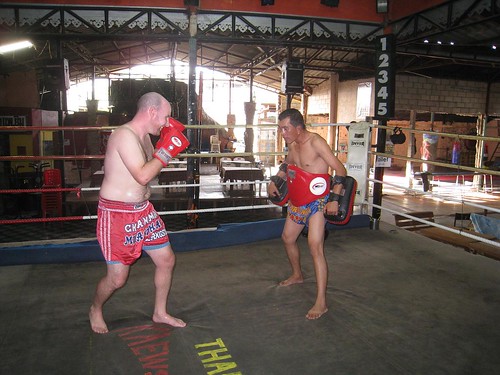 Mr. K, the 1987 muay thai champion of Thailand, was my trainer. A couple of other real Thai fighters were also hanging around, with one in particular helping me out. He went out to buy me some tape to wrap my wrists (an additional cost for any other novices out there) and took all of the photos while I punched and kicked with all my muay thai might. A young Texan guy also joined the training session, trying to work off the weight gained from being on the road for 6 months. I could relate all too well, having recently confirmed a weight gain of 20 pounds (9 kg) since leaving home 11 months ago.

Before Mr. K showed me a single move, he had me spend 10 minutes bouncing left and right around a tire. A few minutes later, my calves were burning and I lost any sense of shyness, removing my already sweat-soaked shirt. The boxing shorts were on loan, after a quick smell from Mr. K, deemed they were wearable by a customer. 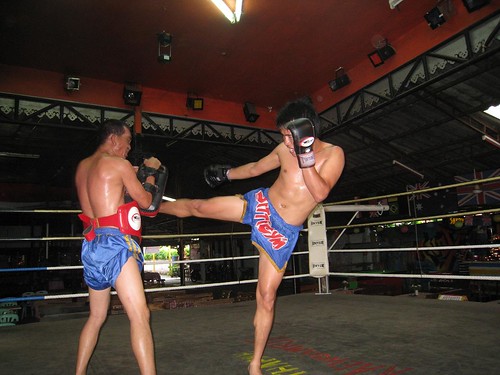 Mr. K taught me the basic moves – right/left jab, kick, knee (to opponent's face), and arm/leg blocks. We started without the gloves in the corner training area, then with gloves on the heavy bags, and finally Mr. K donned the training pads and we got into the ring. He gave commands, and I did my best to follow, forgetting to keep my arms up to protect my face after each move.  He was incessant about reminding me to keep my hands up.  If I were in a real fight, I'd have been KO'd within seconds of the opening bell. The thought scared me. The thought of the Thai fighters kicking and kneeing the hell out of each other on a regular basis also didn't sit well with me.

The Texan and I swapped time with Mr. K, and then a fighter set to headline a 100,000 Baht ($2,900) fight in a few days did a demo. He even took a few minutes to help me with my technique. The personal attention made for a great experience.

The next day, I had a sore right shin from my more forceful right kicks, and a set of ridiculous photos. Hopefully I lost a pound in the process too.

I?ve lately began a web site, the data you supply on this web page has helped me tremendously. Thanks for all of your time & work.

Your website is certainly full of remarkable information and facts and also is actually extremely enjoyable to read through.Properly carried out:)

I am a regular reader of your blog posts. I liked the recent one and other posts on your blog so much. Even thinking of borrowing some ideas and put them to work. Keep all the good work going by posting more informative posts. Cheers. Time well spent on this post.

I haven't forgot about you my man, I will get you that beer. I've been really sick and in and out of the hospital, so my time at the computer has been regulated to school, bill paying, and ensuring that everything is good with my family. Glad to see you took a chance with the sport I love and adore! One hell of a workout, I bet!

Think i'm going to send ya enough for more than 1 beer, especially after the fact that you took it on, and didn't think ill of it like alot of people who have never done it do! Stay having fun, and keep taking those pics. You are going to have one hell of a story to tell the kids/grandkids one day :smile: