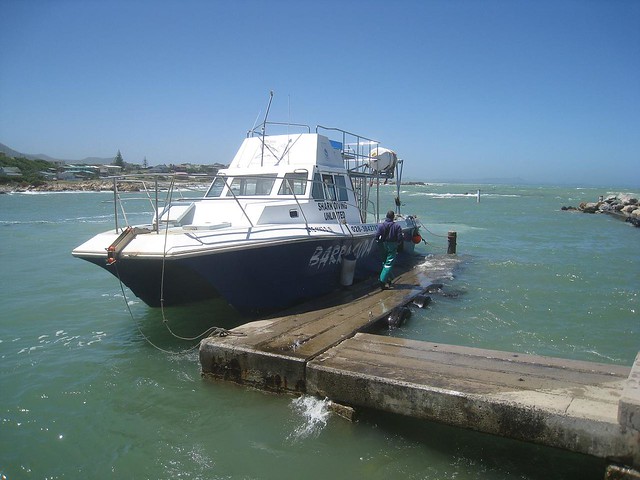 Barracuda is the biggest shark boat in the harbor (and it's not so big!)

[B]oarding the Barracuda, I was acutely aware of the potential for seasickness.

At the time, I was more concerned about an upset stomach than getting in the cage.

A clearly stated rule of the trip was ” no vomiting” in the toilet on board, and a red sign on the small door to the restroom reinforced this message.

The skipper gunned it out of the unassuming harbor and we were quickly bouncing up and down as we crossed the Atlantic.

Dyer Island, off the coast, is home to an abundant staple of the sharks' diet, Cape Fur seals, however the waters were still too rough for us to venture there.

Instead, we made our way along the coast toward calmer, shallower waters where the sharks feed on fish. 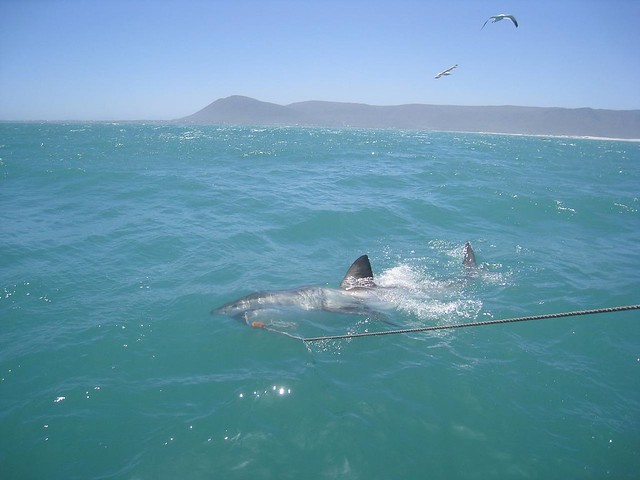 One of my first, and best, shots

Immediately upon arrival at the anchored cage (left in place after the morning trip), we spotted a large grey profile in the water.

There was no mistaking the sharks in these waters, they were all Great Whites.

Everyone jostled for good positions to take photos, and before I knew it, people were dressed in full body wet suits (boots to hood) and grabbing masks to get in the water.

To my surprise, we didn't use snorkels. We would have to hold our breath!!

The crew was clear about setting our expectations.

The visibility was practically zero, so we could get in the cage for the experience but should not expect to see anything.

I don't think anyone skipped gearing up in a wet suit for the opportunity, no matter how small, to see the sharks at eye level.

Changing into the suits on a crowded, rocking boat while sharks angle for fish heads a few meters away is not an easy task. 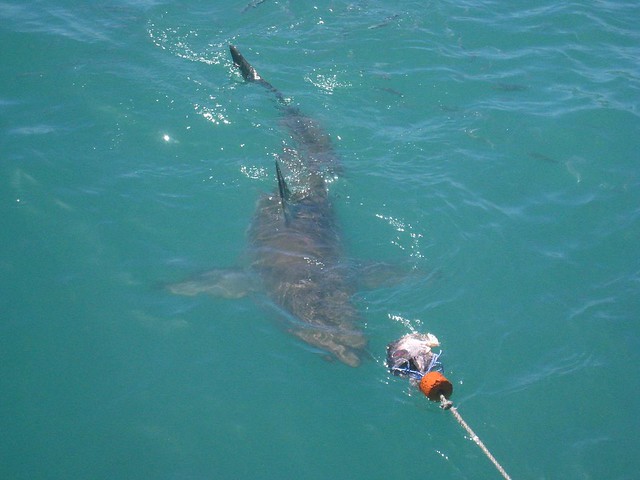 A Great White chases the bait

The first group in the water reported, for the record, no visibility.

As expected, surface viewing offered the best chance to see the sharks, yet I knew I had to brave the waters to win the dare (and satisfy my sense of adventure).

Getting in and out of the cage is as haphazard as it might seem.

The boat is constantly rocking with a constant lean toward the cage side. Five other people are already squeezed in there. And of course there are giant sharks circling us at all times! 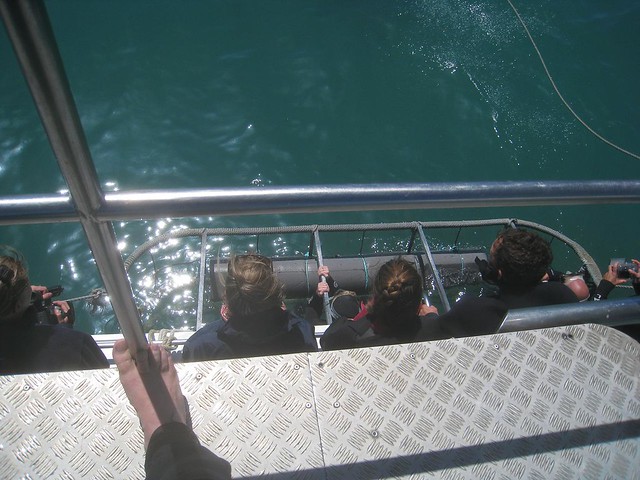 A view of the cage from above 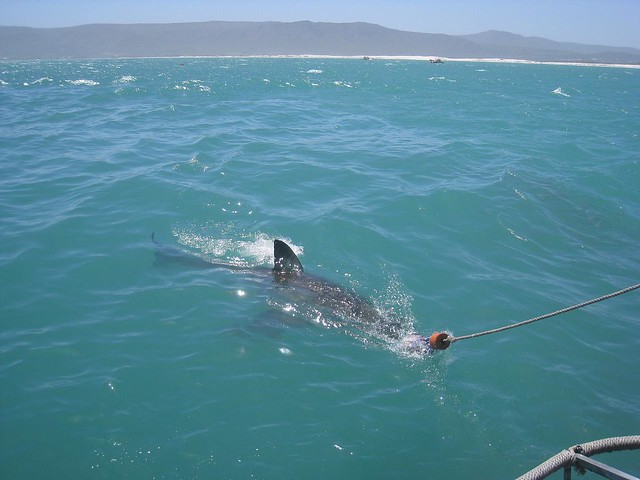 Between people's excitement, confusion, and varying degrees of comfort, it was a more chaotic experience than I expected. It took a few cycles of ” get down” for me to get into the rhythm.

Going underwater was important lest you risk being knocked unconscious by a flailing shark tail.

One French man preferred to watch from above water….and he was eventually moved to my right, meaning I was the second person in from the left end of the cage. 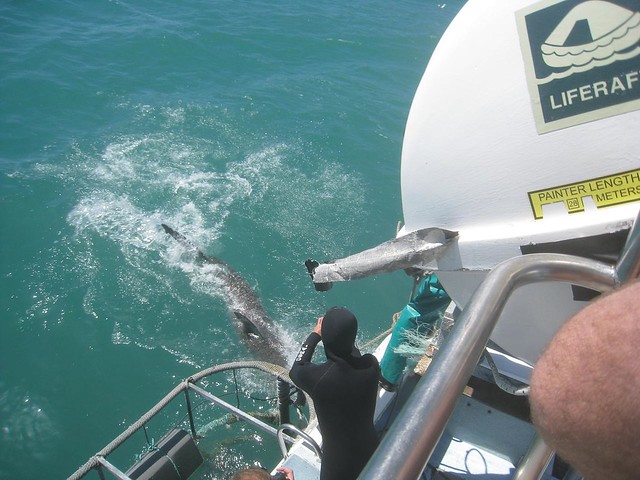 A shark nears the right side of the cage

I was in the cage about 15 minutes when it happened. The crew yelled “get down” and I went under to see Jaws ram straight into the cage, inches from my fingers and face.

All I can remember was a mouth full of teeth grinding on the metal cage.

Because the bars that make up the cage are far wider than I'd prefer, it would not be an exaggeration to say the shark's mouth was within the cage.

Taken completely aback by this sudden, close-up confrontation, I glided a few inches to my right so my fingers were in less danger of being (albeit inadvertently on the shark's part) sliced off.

A few seconds later, it let go and quickly disappeared. 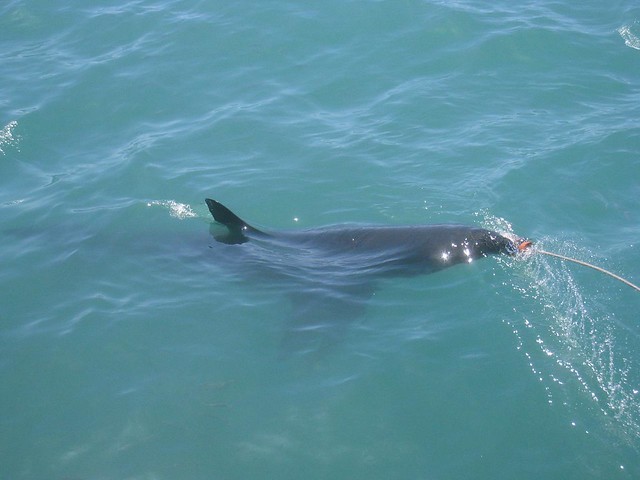 One of the smaller sharks that day

I burst out of the water for air, put my knees back on the bar, and feeling I just got five times my money's worth, exited the cage in the least graceful manner.

The videographer harnessed the trip's most exciting moment to reinforce the need to put your hands in the right place ” because you can see what happens.”

It wasn't until later, watching the video footage back at the office, that I would see the same view as everyone on the boat.

Unlike all the other sharks on our trip, the one I met face to face didn't turn away from the cage at the last minute.

Cage Diving with the Great White Shark is an enthralling experience. A once in a life time opportunity if you are in South Africa.

Between me and my husband we've owned more MP3 players over the years than I can count, including Sansas, iRivers, iPods (classic & touch), the Ibiza Rhapsody, etc. But, the last few years I've settled down to one line of players. Why? Because I was happy to discover how well-designed and fun to use the underappreciated (and widely mocked) Zunes are.

Dude that is some scary stuff right there! I will absolutely p myself!

Dude that is some scary stuff right there! I will absolutely p myself!