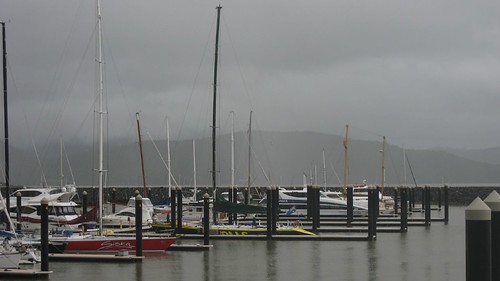 After a rain soaked Fraser Island trip, I was hoping for smooth sailing under blue skies for my 3 day/2 night sail aboard the mighty maxi yacht Apollo (green/yellow 80-foot racing yacht). As you can see in the photo above, it was cloudy and rainy the morning we set sail from Airlie Beach. To make matters worse, as I cased the passengers outside Gloria's Cafe (our meeting point), I realized there were very few young ladies. In fact, it turned out that there were zero single women amongst the 26 passengers! Between the weather and multitude of Canadian men and couples, I was feeling a bit bummed out. 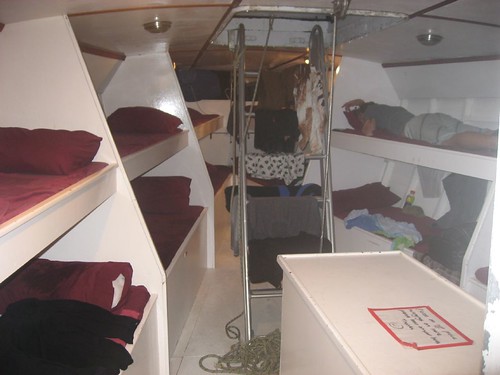 Still, this would be my first time sailing, and on a retired racing yacht no less. It had a successful history of winning big races such as the Sydney to Hobart race in 1983. I'd learn it was made of all aluminum, and was a one of a kind. The designer is deceased, however his buxom blonde 22-year old daughter takes turns skippering it. 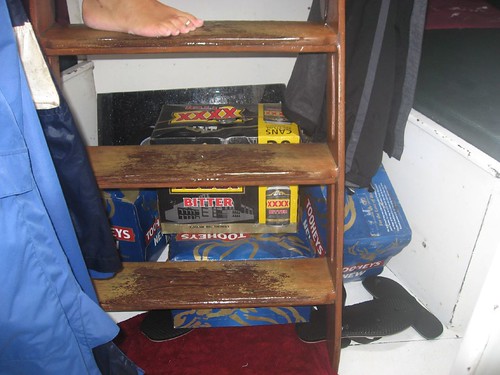 Given it was a dude-fest, there was a ridiculous amount of alcohol brought on board. It seemed like each Canadian (and there were about 10) brought a 30-pack of beer and a 2-liter bag of wine (plus 1 funnel). As the crew was loading it all they said they had run out of room (which never happens). So after the two deck coolers were filled, at least 120 cans were stowed under a ladder (see photo). As for me, I brought 9 cans of beer, and maybe drank 7. 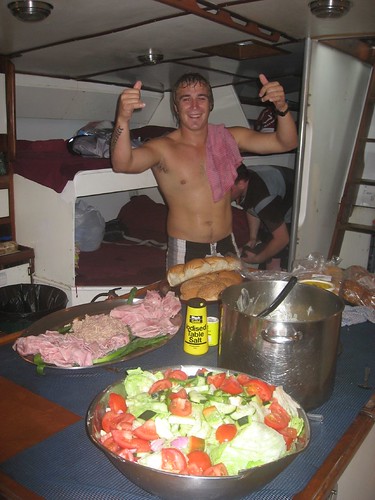 The crew was made up of Joe (skipper), Maxi (deckhand), Goosey (chef), and Avi (divemaster). All of them had to help each other out on the trip, regardless of their primary role. I think they all had to put their hand down the toilets at one point or another to unclog them.

So I didn't get a lot of photos from the first day due to the stinging rain in our faces as we sailed to our first destination – a snorkel/dive spot off one of the islands. Included in the trip's cost is a free SCUBA dive, so Avi briefed us in groups depending on experience. I signed a liability waiver I could barely read and tried to calm my nerves. As it turned out, the heavy rains muddied the waters so visibility was too poor for the intro dives. I snorkeled, though didn't see much. By day's end, massive drinking was under way (as you can't SCUBA after alcohol). 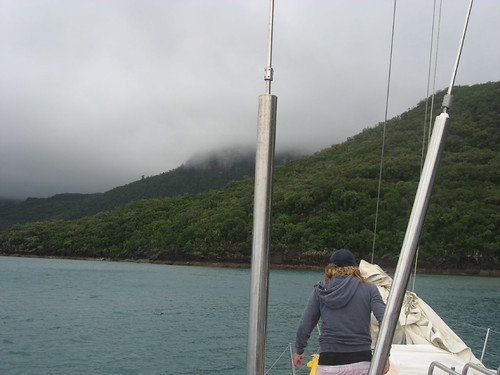 In the evening, with everyone's wet clothes and towels hanging throughout the boat's cabins, it smelled mighty awful. Most of our sheets were wet as well, and since it rained at night, we couldn't keep the ceiling windows open to provide relief. Despite it all, hanging my legs off the high side of the boat as we set sail through the pouring rain was exhilarating. Despite the highest winds (and seemingly highest waves) of the trip, the boat felt incredibly stable. I didn't feel an ounce of sea-sickness. Since all the islands are within the protection of the Great Barrier Reef, I'm sure it doesn't get too much stormier unless a cyclone comes through the area.

That's a lot of alcohol! Remember, you're TRAVELING around the world, not STUMBLING. J/K Hope you were able to find fun despite the bad weather.

That's a lot of alcohol! Remember, you're TRAVELING around the world, not STUMBLING. J/K Hope you were able to find fun despite the bad weather.

Rain it's a bummer but no single girls thats the worst!