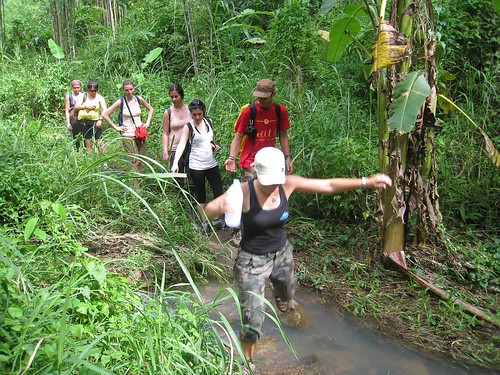 Sleeping in the authentic way of the villagers was not particularly restful. I tossed and turned all night. In the morning, chickens were running around under the platform we slept on. Tea and coffee were available, while breakfast consisted of toast and a hard-boiled egg.

Our group and the other trekked together for the 1.5 hours to the elephant camp. Once at the camp, we split up with half the people riding elephants on the opposite side of the river, and half on the restaurant side (which was adjacent a paved road). 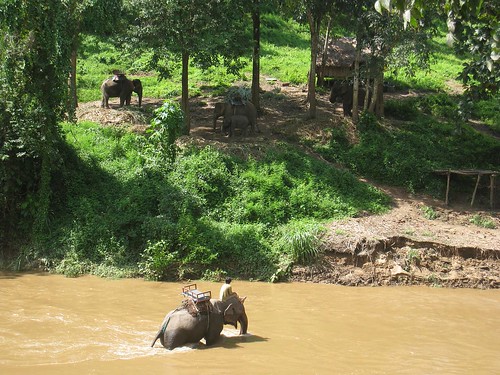 Unfortunately, I was amongst the group on the road side. Myself and an Israeli guy climbed aboard a monstrous elephant while the trainer sat on its head. Unlike the ride in Laos, this experience included the elephant feeding on two or three occasions while we moved along. The sheer power of their trunks to pull apart foliage (heck trees) and carry them along while munching away was a sight to behold. 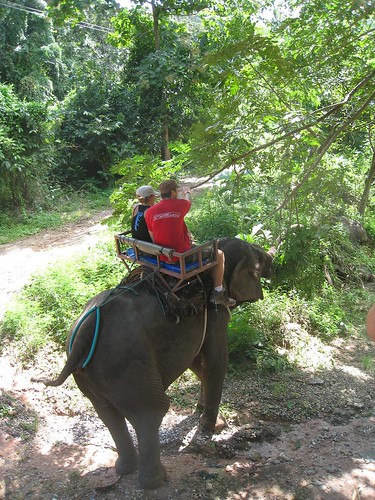 Much of the walk was along the pavement with cars and tuktuks driving past us. It was a bit of a letdown for me and the Spanish couple. After about 30 minutes, the guides parked the elephants off the road and dismounted them for a smoke break. When I motioned to them to ask about why we were just sitting there, they said “5 more minutes.”

Either they didn't explain that this was an opportunity for us to get use to the elephants without the trainers on their heads (which was the way they would walk us back), or they were really taking a selfish smoke break at the expense of the tourists' experience. I felt completely unsafe on our massive pachyderm, though he stayed practically still unlike Monse and Xavier's.

Did I mention there was no rope or safety bar to hold us on the seating platform? 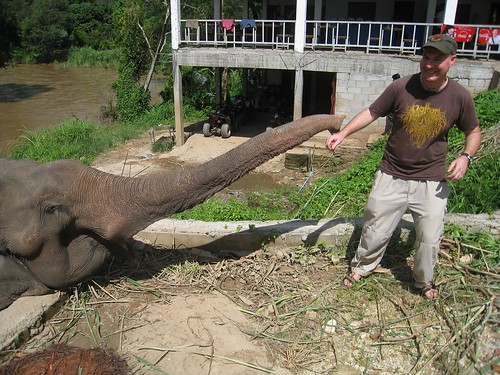 Once we arrived safely back at the docking station, the Israeli fed our boy some bananas, while I tried my hardest to reach out and pet his trunk. As you can see in the photo, I'm still developing a sense of comfort around these funny looking animals. 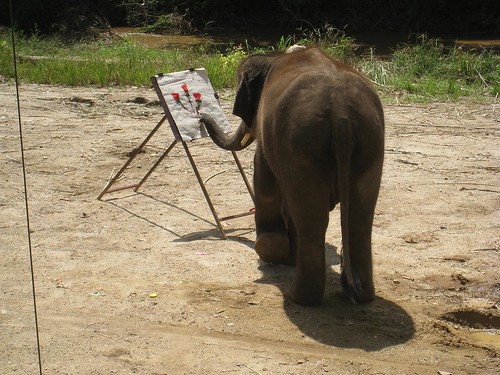 The elephant show was a sad sight. I took photos, and clapped on queue, but felt bad for these mighty creatures which were reduced to playing the harmonica or throwing lawn darts at balloons with their trunks.

The Japanese girls departed, and my group adopted the Israeli from the first night. We then merged with a group of 9 Argentinians and a Chilean for the 1.5 hour walk to the second village. Some of them spoke better English then others, though Spanish was now the common language leaving the Israeli and I by the wayside. 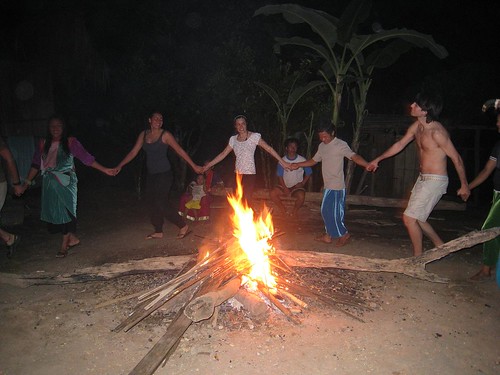 We arrived in mid-afternoon at the second camp. There was absolutely nothing to do. After reflecting on this fact, some people talked while others napped. Dinner came around and it was thankfully better than the previous night. The South Americans' guide was a happy-go-lucky guy who all but shouted his passing commentary and jokes. He was the social leader for the night.

To start us off, some villagers arrived in traditional dress and sang some songs as quite a few of us (but not me) danced in a ring around the fire. Then, the guide had us playing campfire games with the loser having to sing or dance. It was silly and embarrassing, especially when I couldn't come up with a song to sing on my own after losing one of the games.

Monse lead us later in a few others, including one I had played on my Nepal rafting trip. The entertainment was much better this second night, and we all retired around 10pm.

So could the elephant actually paint?

I took a similar trip last year to the hill tribes near the Thai border with Myanmar. It was incredible.

So could the elephant actually paint?

I took a similar trip last year to the hill tribes near the Thai border with Myanmar. It was incredible.

check this one out dude

check this one out dude

Did your new Chilean friend convince you to come visit this country?

Nope, I don't think we exchanged a single word! I talked a little more with a few of the Argentinians.