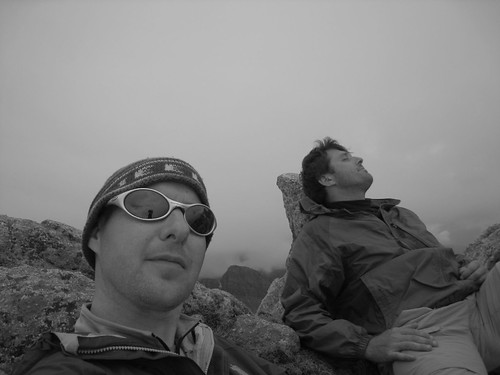 When the photos were taken, the Tibetan freedom video shot, and the food consumed, we began our descent into the now cloud-shrouded valley. I was glad to have finished one of my two bottles of water so I could use both of my hands to steady myself on the way down.

The first stretch of snow we needed to cross was also the steepest. Despite my recently gained experience on the way up, I was still reticent. Ashok picked up on my anxiety and offered his hand until I was safely across. I could tell the snow had softened up since we last passed through. Harold managed it on his own, though I sometimes worried about his safety when I would watch him. 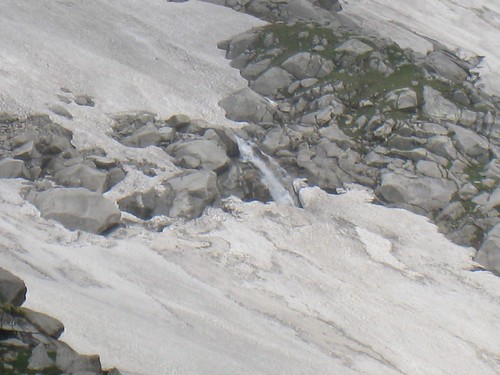 We continued to head down at a faster pace then we ascended, and I felt comfortable enough on the remaining sections of snow to walk them independently. Ashok showed me how I could poke holes into the snow using my hand to create a third point of contact. The first time I tried this technique, my hands grew wet and cold very fast. Thereafter, I began to wrap my bandanna around my fingers before driving them through the layer of goat poo into the soft, wet snow. In any other circumstance, I would've found the process disgusting. Harold joked that I wouldn't be using the bandanna to moisturize anymore (a reference to my use of it as a cold compress for my sunburn the first two nights). 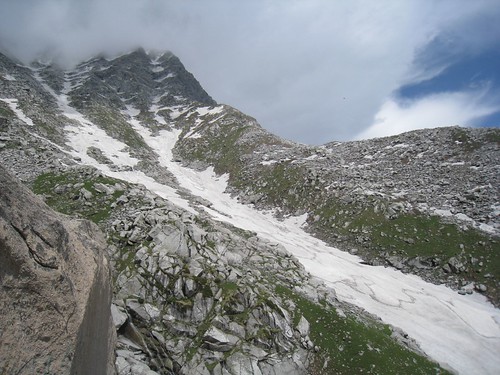 Harold was the first to slip and fall. He fell forward and caught himself against a medium-sized rock. It looked jarring, though he managed to escape with only a scraped knee (to my knowledge). He vocalized his frustrations about the safety of the trail, namely the wetness from the rain and goat poo, and the snow. Ashok tried to refocus his mind and energy on taking secure steps, as there would be ample time to air concerns once we safely reached camp (and later town).

I slipped second, my feet sliding forward from under me. I landed lightly on my bum. I tried to sharpen my focus on footsteps, finding it a great challenge given my body's natural momentum to move downhill. My headache was moderate by this point, and I knew Harold's was worse. The best thing for the both of us was to reach camp as soon as possible. 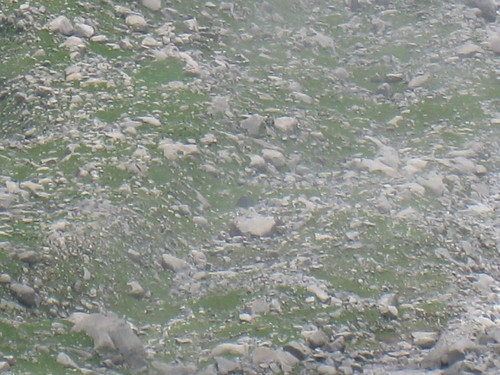 Harold's next fall was the result of an unstable rock. Without hesitation, Ashok dove on top of him as he landed on his right side. The moment was over in an instant, yet Harold later acknowledged that our guide's quick reaction probably saved his life. He said he recognized he was in trouble, and knew he'd have to try and grab onto a rock or something to keep from falling over the edge of a drop off, yet there were no guarantees he could've arrested his fall on his own. I redoubled my efforts to continue cautiously thereafter, though I slipped and landed on my behind lightly one more time.

We stopped in a large cave on the way down for one of our breaks. Ashok said it was mainly used by trekkers coming from the opposite direction, that it was cold, and could sleep around 30 people. It had a low stone ceiling and a hay-covered floor. There was a large flat rock which acted as a balcony. The view was beautiful as the sun had emerged. While Harold and Ashok soaked up the rays, I spent the ten minutes in the shade of the rock, under my jacket trying to shield myself from the most intense sunlight I'd ever felt. 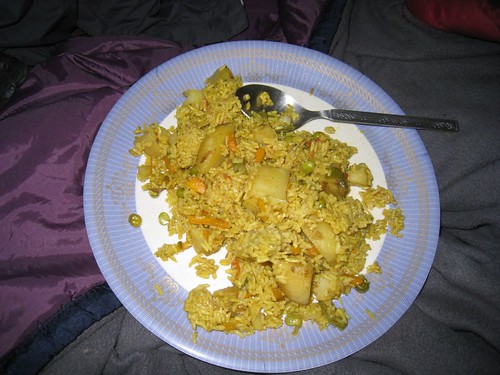 As our 3.5 hour descent drew to a close, my legs were like jelly and my fear of falling on the glacier were clear. Ashok waited for me to reach him in the middle, and again offered me his hand so I could be guided across in a more timely fashion. Harold slipped and landed on his butt once while walking ahead of us. 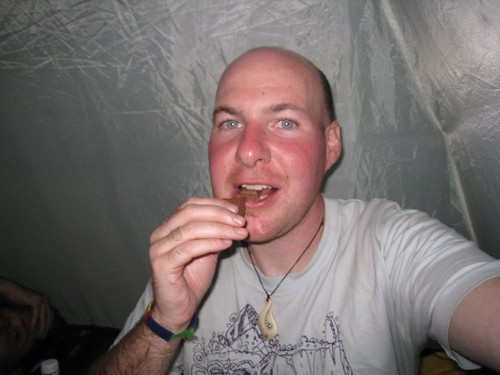 Arriving back at our humble camp, I felt a great sense of satisfaction. Our porter brought a delicious rice and potato dish to our tent, followed by French fries and tea. He refilled our water bottles. I savored my last two squares of Cadbury chocolate which I had saved for consumption back in the tent. Harold and I rested, hoping our headaches would quickly disappear. We ate dinner in the rock shelter kitchen, though neither Harold nor I were especially hungry by that point. We both slept well that night.

Wow... what a great experience. Although that food looks FAR too good for 'trail food' in my opinion. My major memories of treking always include BAD food. I'll have to try this company when I finally get to India.

Wow... what a great experience. Although that food looks FAR too good for 'trail food' in my opinion. My major memories of treking always include BAD food. I'll have to try this company when I finally get to India.

Happy dance for the accomplishment.

And a great read.

Happy dance for the accomplishment.

And a great read.

Your content on India so far has been amazing! Great photos.

Before you left for the trip did you have experience climbing or even hiking often? Annapurna and now Indrahar is no easy task. I am a novice hiker and I hope to incorporate some trekking in my travels but I always wonder how I would fare against some major elevation.

Nope, I had no hiking, trekking, or high altitude experience to speak of. I had done an intro class on rock climbing 10 years ago and a little abseiling more recently. I was one of many first time trekkers in Nepal and India. Just as many petite girls are doing the climbs as the guys, and carrying their own backpacks over 5,500 meter passes to boot (on the Annapurna Circuit). It's a very supportive environment - it didn't feel like a competition at all, with most of the younger people paying very close attention to the early signs of altitude sickness.

It's challenging, though the views and sense of accomplishment make it very rewarding.