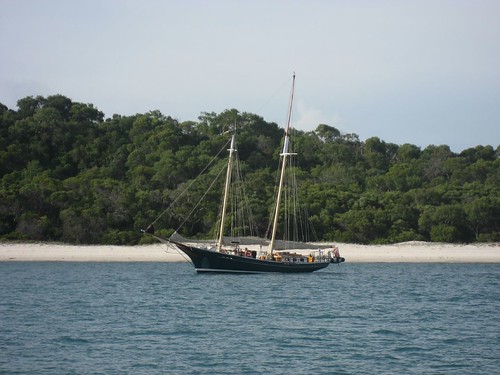 We awoke on the third day to glorious sunshine. At least glorious to most on board. When I heard we'd be on Whitehaven Beach for 2.5 hours in the morning, I pictured myself baking alive. And guess what? I was on fire for much of that beach time. I'm not made for such heat. I took a few walks along the beach, and later found some shade near a trail entrance. Since you had to wear a wetsuit (aka stinger suit) to go swimming due to the jellyfish (aka stingers), I didn't bother bringing one ashore. The crew cleaned up the boat and changed the linens while we were gone so they could get to the pub faster after we got back. 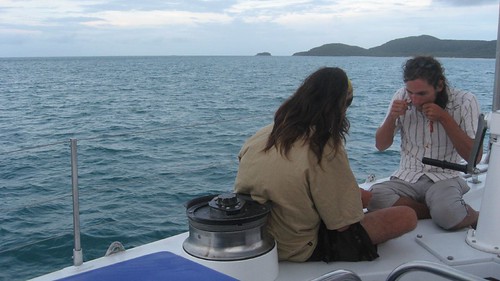 The sun beat down as we set sail on our way home. We sailed for about 4-5 hours which was fine by me, until I realized how hot it started to feel on deck. I ended up with a mighty bad sunburn on my knees, and stripes of red on my legs because I hadn't spread the suntan spray to even the coating out! It was worth it though. 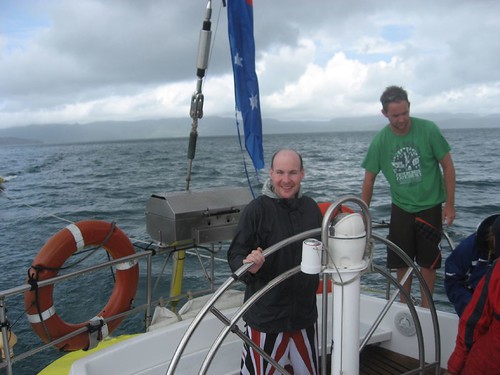 As we got closer to the marina, and the winds let up, the Skipper asked if I wanted to try my hand at sailing the boat. I didn't hesitate, not one bit! I was over there in the blink of an eye. His instructions were to keep us headed toward the point of an island ahead at a bearing of 240 degrees (if that's the right way to say it). I found it hard to keep my eyes off the compass which was mostly for times of low visibility. I imagine those 15 minutes at the wheel will be a highlight of my entire trip, let alone Australia and the Whitsundays. Thanks Joe!

After we disembarked (in the rain, just as we had begun), I returned to Magnum Backpackers, got my bag out of storage, and opted for a double room to myself for the night.  A little privacy after 3 days and 2 nights with 29 strangers on a boat was in order.  The room had air-conditioning as well – sweet as!

The crew invited us out for drinks at Beaches bar next door to my hostel.  They do a little after-party with all their passengers which is apparently rather unique amongst the 300 or so sailing operators in the area.  Knowing I had a full day on the bus to Cairns the next day did little to stand in my way of drinking a few pints.