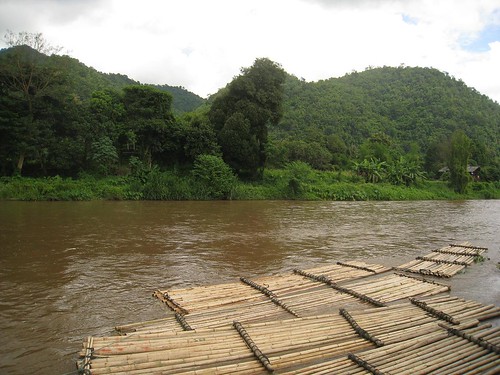 I slept better the second night, and we ate a solid scrambled eggs, toast, and watermelon breakfast. Our time spent walking in the forest the final day was all of 15 minutes. I kid you not! It may well have been the most relaxing trek ever. I think it would be better characterized as a cultural hike. The term “trek” can then be reserved for longer distances and time walking per day. 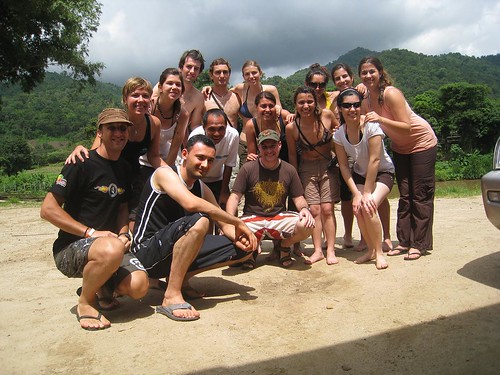 The benefit of less walking was the incorporation of the elephant rides on day 2, and rafting on day 3. Monse and I were nauseated by the truck ride upriver, but we were treated to exciting sections of whitewater. The rubber rafting lasted about 30 minutes, of which a solid 20 were in rapids.

When I asked our Thai river guide about the class of the final rapid, he didn't understand me, only characterizing it as the “big” one. Left to my own judgment, I'd say we hit a few Class III's and maybe a Class IV. The cool part was there was barely any work involved. We were just along for the ride, and when the rapids ended, we switched to a traditional bamboo raft for a 20 minute ride along a calmer section. 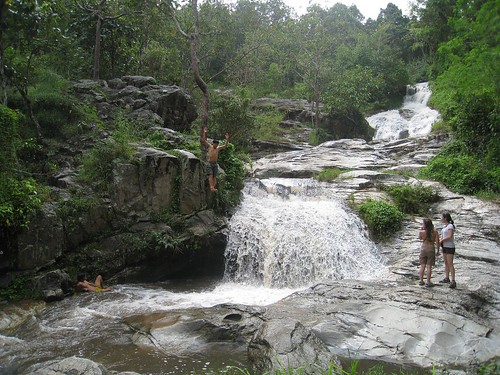 Once we were out of the river, pad thai lunches were consumed and we drove an hour and a half to a waterfall near Chiang Mai. A few of the other guys slid on their butts down the waterfall in the center of the photo above, though only the local did the cliff jump. I didn't feel comfortable doing either at this particular waterfall and sat them out.

Day 3 concluded with drop-offs back in Chiang Mai. I took a room at a nicer hotel (sorry Kent) to catch up on rest as I had a night train booked to Bangkok the following day.