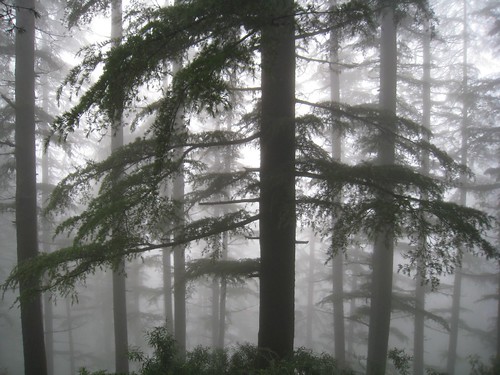 On our fourth and final morning of the trek, I awoke with surprisingly little soreness in my legs and body.  And my headache was gone, again.  Harold and I packed up our stuff, ate breakfast, and we were all on our way back to McLeod Ganj.  A dog we had fed leftovers to the prior night followed us for the hour's walk back to Triund.  While he probably belonged to a local shepherd, he made for nice company, often barking at the other dogs we'd encounter (though having to back down due to being outnumbered 2-1). 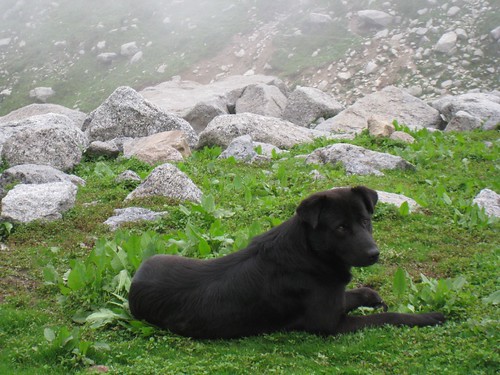 Ashok had indicated it would be about a 13km walk from our second camp to town.   We made good time, and I had many recollections from our way up as we passed old rest spots.  One nice aspect of going back the way you came is the lesser desire to take photographs.  The trail also looked far less steep and challenging given what we had to climb the day before. 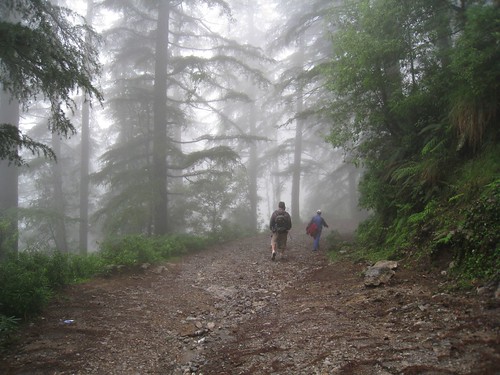 We stopped for lunch at the cottage where we first met Ashok.  Harold and I took showers and relaxed. Normally, we would have taken a taxi the remainder of the way however the heavy rains from the night before (at lower elevations) had washed out roads.  Later, we would hear firsthand reports of the 5-hour deluge which ushered in a week's worth of rain.  Thankfully, we had spent the night above the storm (literally in the clouds), only experiencing flashes of lightning through our tent. 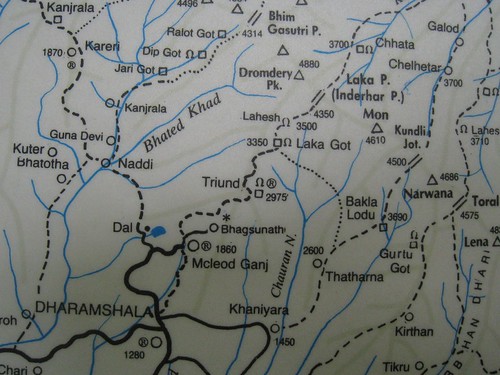 As we walked through the misty pine forests above McLeod Ganj, we began to see monkeys, and signs of modern civilization.  These lead to the ever-nearing blare of car horns, and before we knew it, we were spit out at the bus stand (main intersection) in central McLeod Ganj.  It took just a few seconds for me to become fed up with the noise and crowds, making me appreciate the time we had just spent communing with nature (and goat poo).

After the goodbyes, I was overcome by a wave of energy which had me hotel-hunting for a room with a soft bed.  After visiting a few places, I settled on Hotel Mount View.  I emailed Steve so I could tell him about the trek the next day, and let my parents know I was alive.  I tried hard to stay awake for the Euro2008 soccer match that night (as I also had a TV in my room), however it was hopeless and I soon drifted off to sleep.