You've likely already seen some of the incredible architecture of Delhi, and along with the amazing structures of history, the action, and energy while navigating the streets of the city is also enough to keep anyone entertained. Wandering through Old Delhi, and specifically, the back lanes is always an adventure.

Sometimes the lanes are packed with so many people you have to walk single file… and then a motorbike will attempt to pass through. Students smiling for a photo

When I was in Delhi, nearly everywhere I went, groups of students and even some adults would kindly ask for their picture to be taken.

They didn't want a copy of the photo, they just wanted me (a tourist) to have a photo of them – pretty cool. Getting around in a rickshaw

One of the easiest and quickest ways to get around congested areas of Old Delhi is by bicycle rickshaw.

They dominate and control the streets.

Sitting in the back of a rickshaw

Though it seems nearly unbelievable, somehow the rickshaw drivers manage to navigate their way through never-ending crowds of people, traffic, animals, and all sorts of other unimaginable chaos on the streets. It's always a fun ride. Old Delhi is one of the trade and distribution hubs for things like spices.

Porters are in charge of carrying giant gunny sack bags from trucks on the main road to stores deep into the footpath lanes.

Walking through markets you'll be amazed at how many products are stacked inside of the smallest of stores.

I was almost scared to enter some of these types of stores, fearing that I might bump a stack of jars, and watch as the entire store collapsed like dominoes… luckily that never happened. 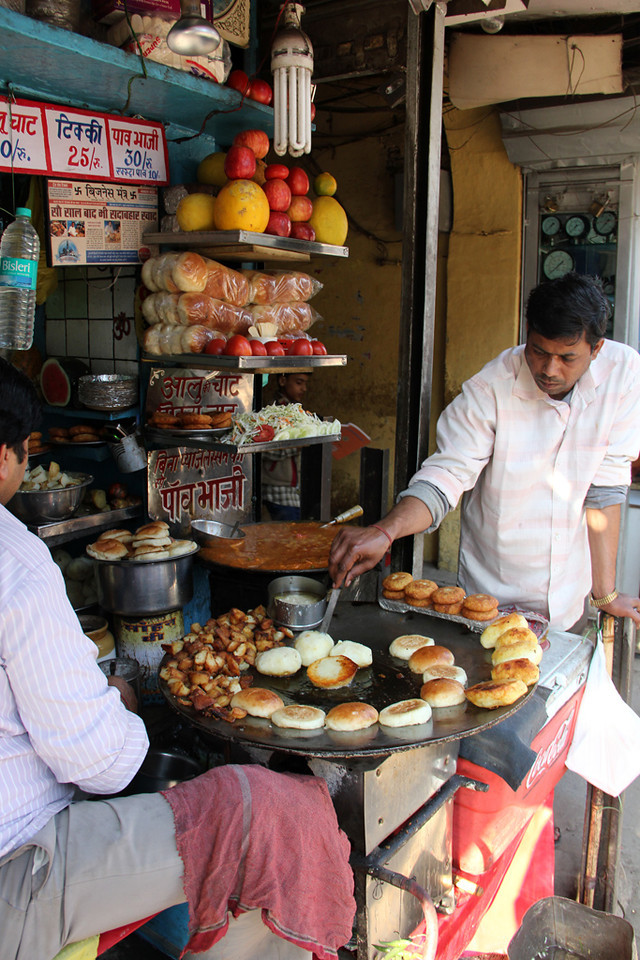 Street food vendors cram themselves into closet-sized facilities where they whip up some amazingly tasty snacks.

This particular vendor, located on Chawri Bazar road, served something known as fruit chaat, one of the greatest snacks I ate during my visit to Delhi. Another snack, especially if you have a sweet tooth, is a jalebi. It's like swirls of a pancake dough deep-fried in butter, then soaked in a sweet syrup.

And finally, let's not forget about the wonders of north Indian curries.

Slow simmered, with a perfect blend of spices, butter, and meat, north Indian curries are extraordinarily rich, tasty, and satisfying.

Delhi, with a mixture of architecture, history, culture, and food, combined with the never-ending flow of energy and chaos, is a recipe for fascinating sights and sounds.

Im in Delhi now, for the first time. It sure is incredible, everything you say here and the pictures gets me so excited I dont want to sleep and want to headback out. Delhi is amazing

Incredible pictures. Have you been around Kashmiri Gare, Lal Killa and Chandni Chowk?

Delhi is really a nice place to visit.....the people of delhi is wonderful the welcome people like in a wonderful way they think or we can say they follow the policy that guest or tourists are god for them.............

Wow, amazing photos! It looks so colourful and crowded. The back lanes of Old Delhi look crazy!

Place is beautiful & the culture is good.. Having said so if incase u happen to go there do not believe or trust any person easily there...