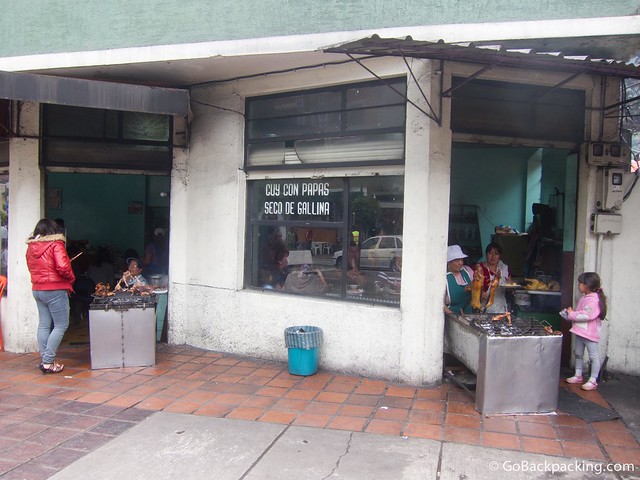 [E]ating cuy was high on my to-do list in Ecuador, despite having a guinea pig named Patches as a pet when I was a kid.

After all, having dogs as pets didn't stop me from trying that meal in Cambodia.

On the main street in Banos, there are two cuy restaurants adjacent the Mercado (market). These are small, dark, smoky restaurants frequented by vacationing Ecuadorians, and the occasional tourist who decides to try the local delicacy.

Despite hearing Cuenca was known for cuy, I couldn't wait any longer. One afternoon, I walked into one of the cuy restaurants and took a table in the back.

There was little light, which may have been a good thing. The cuy prices were hanging on the wall: $19 for the whole animal, $9 for half, or about $4 for a quarter. 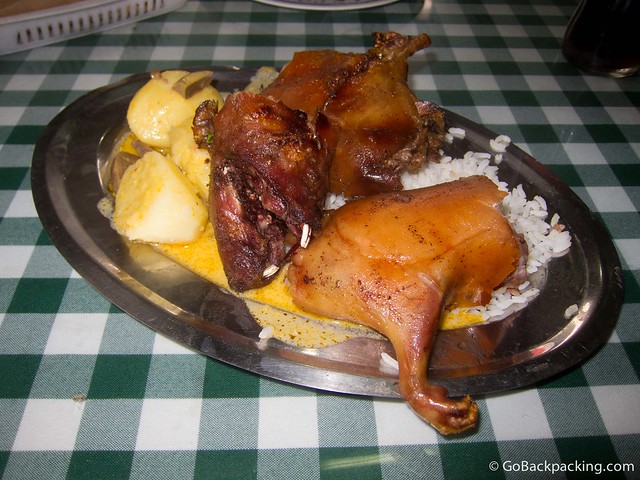 I ordered half a cuy, which turned out to be rather ambitious of me, and a Coke to wash it down.

Outside the restaurants in Banos, you can see the cuy being cooked over hot coals. Three at a time are impaled on a large, pronged stick, which is then rotated slowly over the fire.

I watched my cuy being hacked with a cleaver. I was presented with the head, tail section, and two front quarters, along with some white rice and potatoes.

Initial attempts to try and eat the greasy little monster with a knife and fork quickly failed. I commented to the waitress about my difficulties, and she responded that it's easier to use my hands.

I began picking at the front quarters. The skin was crisp and crunchy, reminding me of the pork skin I'd eaten in Ubud, Bali.

Underneath it was a slimy, greasy layer of fat, and a razor thin section of meat, which tasted like chicken.

Further down, all you'd get were bones and organs. While I was honored to receive the head, complete with brain intact, I'd already been down that road with Skop in South Africa.

I ate the rice and potatoes to give the impression I'd eaten more of my lunch than I really had. I wasn't fooling anyone, and felt as though I didn't do the little piggies life justice. 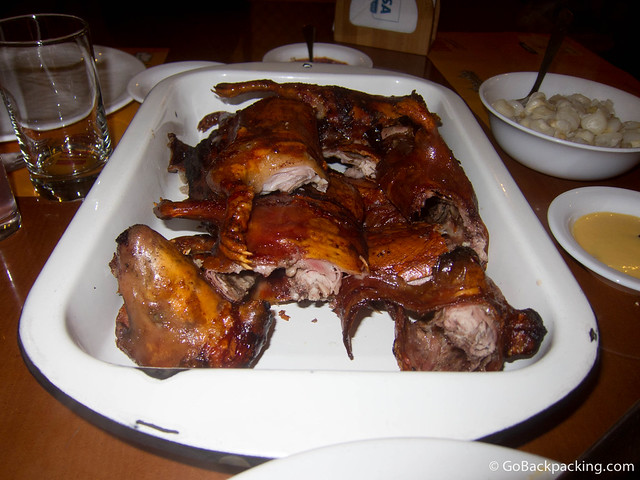 A few weeks later in Cuenca, I took an Ecuadorian date out for dinner in a much nicer cuy restaurant.

I wanted to give it another try, convinced I was missing the joy in eating this little animal.

Despite the more comfortable surroundings, a cuy is a cuy, claws and all. [gbicon]

Brave for trying it TWICE! I had it as well... I actually didn't mind it :) My mom couldn't eat it (she too had guinea pigs as pets) so i ate hers as well. Great post!

Was that US dollars? I love your last sentence. Yep.

Is it there much meat on them? Looks like a lot of work for not much eating!

Ha - My stuffed animal when I was a kid was named Patches!

I only had cuy once a few years ago when I was in Peru, but I did really enjoy the crispy roasted skin and the chicken like meat - but it was pretty fatty!

Not a big fan of Cuy myself even though I live here, but enjoyed your write-up. If you're in Quito and looking for some chocolate to cleanse your palate after the Cuy, though, please give us a holler!

Hey Jeff, thanks for reading, and the invite!