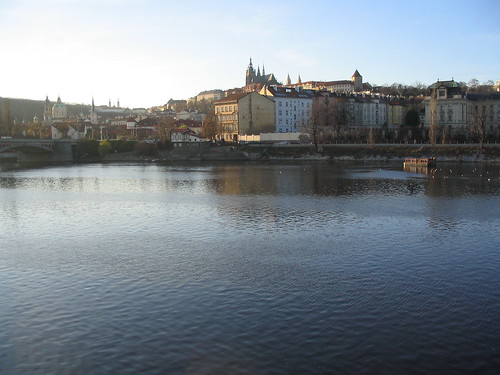 There are moments as an ESL instructor where circumstances teach you to bite your tongue.  Yes, you want to correct your students' every mistake.  But, if that were the case, said student would likely manage a total of five statements in sixty minutes.  The goal is to speak, not to be crowned Ms. Perfect.

Letting mistakes slide is a bit of a subjective art for each teacher.  My toughest “should I interrupt” debates typically centered around errors that would undoubtedly result in an awkward moment.  A favorite example came from my close friend and Prague roommate, who was, at the moment in question, leading a lesson based around one of the popular and life-saving controversial topic lessons.

The focus was on relationships of the male/female variety.  It was a private lesson, and the student had made some astute observations, in the midst of which he used the term, ” intraception.”?  My friend was then faced with the choice so many of us knew well: interrupt with the correct word, or let the obvious mistake slide in favor of promoting fluency.  After all, the point was still communicated, and you have to give it to the student: the prefix he chose makes a little bit of sense.

I have to be honest: sometimes, I remained silent, grinning internally at my students' expense.  (Please don't judge; we all have our flaws).  Poking a bit of fun over post-teaching drinks is practically a traditional pastime for the ESL set.  I can clearly remember sitting with a glass of wine and the same friend, who shared her student's most recent inquiry:

Vegetarianism is not exactly common in Prague, making the error that much easier to laugh about.

In all seriousness, however, English is a tough language.  You have to sympathize with students who had never learned that the positioning of the words ” get,”? ” on,”? and ” it”? can change markedly change the speaker's meaning.  Those same students would never guess that while you may ask your boss to ” shut down”? a computer, you probably shouldn't tell her to simply ” shut up.”

Whose responsibility is it to correct these mistakes?  This was a common debate amongst the teachers I knew.  Should we step in, potentially embarrassing both the student and ourselves?  Or should we shrug it off, hoping our student didn't curse us later in life for allowing future awkwardness to occur?

For better or worse, for me, those decisions were dependent on my relationship with the student.  I could discuss anything with the twenty-five year old female secretary I saw twice a week.  But the customs officer whose age was close to my father's?  My belated apologies, sir – no one warned me ESL required a backbone.