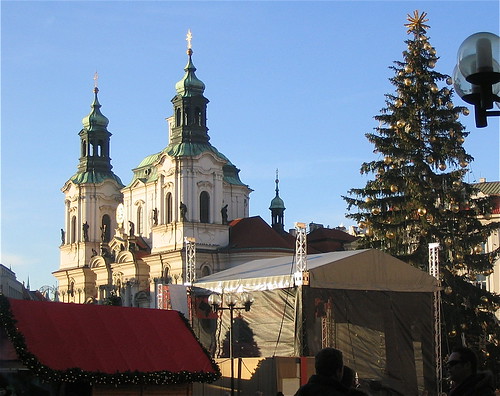 During the holiday season, my memory often returns to one specific class I taught in December of my ESL year.  The students were five lovely women in their thirties, and they spoke excellent English.  Their advanced level had resulted in many lengthy conversations, both lighthearted and intelligent, and they were one of the few courses that I truly enjoyed every single time I taught it.

On this occasion, my students inquired if I would be traveling back to the States for Christmas.  I responded with a yes, and then continued, ” But, I don't actually celebrate Christmas.”?

Then there was silence.

To ease the awkwardly pregnant pause, I added, ” because I'm Jewish.”?

I don't mean to stereotype or generalize.  But I come from New York, where half of every subway car is Jewish.  These particular students, on the other hand, informed me they had never before met a Jewish person in their lives.

Though it was an unnecessary feeling, I sometimes felt isolated as a Jew in Europe, surrounded by Christmas markets and colleagues to whom it never occurred I might not celebrate their same holiday.  It was neither of our faults; it was simply a fact.

But as a teacher, this situation was an opportunity.  I had the chance to bring some added flavor to a late December lesson.  Many teachers I knew used the season as an excuse to have their students read excerpts from A Christmas Carol, watch A Christmas Story, or teach the vocabulary in ” Santa Claus is Coming to Town.”?

Instead, I held a discussion about tradition.  My students put forth their guesses on what my customs might be, and I shared with them my ancestral roots from Eastern Europe to the Bronx.  I learned they'd all be eating carp on Christmas Day; they learned I'd be at a Chinese restaurant.  They shared the costumes they wore as children on the eve of Saint Mikulas; I described the game my family played to search for our hidden Chanukkah presents.  It was a lesson in English listening and speaking, but it was also a lesson in international understanding.

Of course, a Jew in Europe is just one example.  Perhaps you're Catholic, but you find yourself in Eastern Asia, working on the 25th.  Perhaps the only holidays you celebrate in December are the post-Christmas sales, and your station abroad has you feeling nostalgic for the savings.   For every one of us, regardless of background, these few weeks have some form of memory, ritual, or association.

Just as chats about Thanksgiving can build student-teacher bonds, the remainder of the holiday season can do the same.  Dig deep, get a little personal, and hold a discussion.  That dialogue was one of the best lessons I ever taught.

things will always be different...