On March 11, 2007, I asked the gadget gurus of the BootsnAll message boards for some feedback on how much “cool” gear is too much for long term travel.

One of the suggestions I got back was the $20 Empress MP3 player.

Basically, you store your MP3's on an SD flash memory card, and the player reads the music off of it. T

he appeal is the low investment, and lack of attention it would draw from would-be thieves.

The downside is you wouldn't be able to organize music in folders or have some of the advanced functionality other players offer.

I'm leaning toward a slightly fancier, 4 gig player, however, it's nice to know you have options. 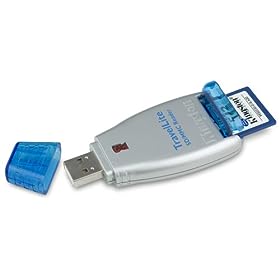 Another suggestion was to get a card reader which basically allows you to forego the USB cable which comes with your digital camera.

I just bought a Kingston TravelLite SD/MMC Reader (with 2 gb SD card) from Amazon.com for $24.99 (plus shipping).

For some reason, I thought a 2 gig flash memory card would be three times more expensive. Just goes to show how little attention I've been paying to tech stuff lately.

The reader and memory arrived in the mail today. It's definetly light, as the name implies.

Now I know why it was so inexpensive ($10 by itself), it's just a piece of cheap plastic that connects the memory to a USB plug.

I'm fairly certain I could chuck it across the room and not be too concerned with it breaking.

Hi. I definitely enjoyed reading through your current composing!. Top quality facts. I would have to would suggest you to generate blogposts even more frequently. I subscribed to the RSS feed. Go on the great do the job!

hi fellas I am going to buy a new wheels. Wish to have a luxury car, but have no ideas what to choose... Can smb advise me something?

hi fellas I am going to buy a new wheels. Wish to have a luxury car, but have no ideas what to choose... Can smb advise me something?

You know what I'm wondering? I'm wondering WHEN the MP3 player became required don't-leave-home-without-it gear. Don't misunderstand me, I LOVE my iPod and no, those words aren't too strong to describe how I feel about it, but I guess I'm thinking that when we put on headphones we block out what's around us. That can be necessary, like on the damn plane, but out in the world?

Now I sound like a crank. Them kids with their damn headphones everywhere. Grrrr. I guess MP3players come very small these days, so they don't take up much room, but I guess I also think, wow, that's one more expensive device to keep track of.

Me, I'd like a tiny weightless laptop with a TON of memory and an amped up antenna for wifi. Then I can pack it with music AND use it for photos and worry about it all the time. :)

When I took my trip to Europe in 1998, I took a tape player (remember those?). I made 3, 110-minute super mix tapes of some of my favorite bands of the time (nofx, pennywise, ween). I really enjoyed listening to it on trains and buses. I'm purposefully staying away from the gigantic 30gig players, and I've downgraded my interest in any video capabilities.

I'm settling into getting one of the $100 players, as I do savor the ability to create a play list, and quickly get to my Bob Marley tunes when I'm ready to relax. :)