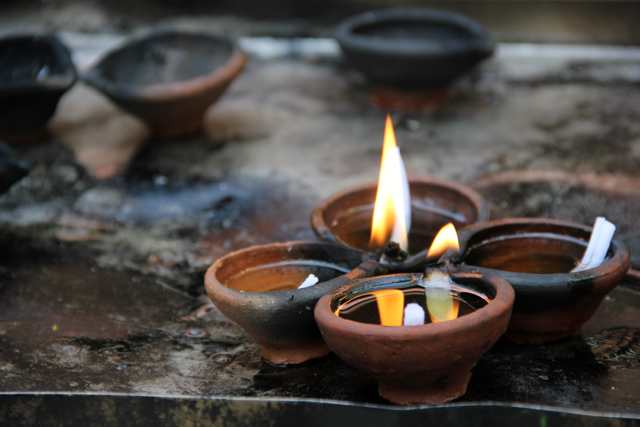 On my last day of visiting Colombo, Sri Lanka, I decided to check out the famous Gangamaraya Temple.

The temple is one of the most well-known Buddhist centers in the city and attracts many locals as well as quite a few tourists each day.

The main part of the temple was built in the 1800s, but since then it has been accumulating more and more Buddhist religious relics and works of art.

There are two main sections of the temple, the main section (which I'll feature here), and just a short distance away is the Simamalaka shrine which is situated within Beira Lake. 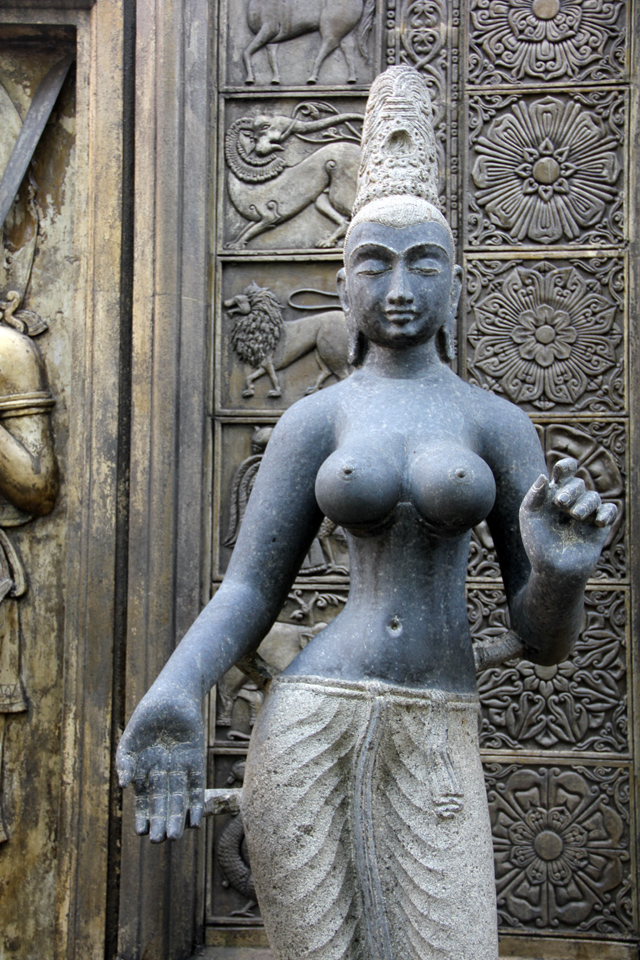 One of the many statues at Gangamaraya Temple

Unlike many other temples I've visited in Asia, this temple wasn't overly ornate from the outside, and it wasn't a high-rise towering golden structure.

It was rather the relics and the statues within and surrounding the complex that made it impressive.

Entrance costs 100 Sri Lankan Rupees, and once you're inside you can begin to see the many sculptures, details, and decoration.

Rather than just being a Buddhist temple, Gangaramaya also includes a library, a learning center, and to me, it felt very much like a historical scholarly museum.

Along with the main shrines, there were many artful exhibitions to browse through. 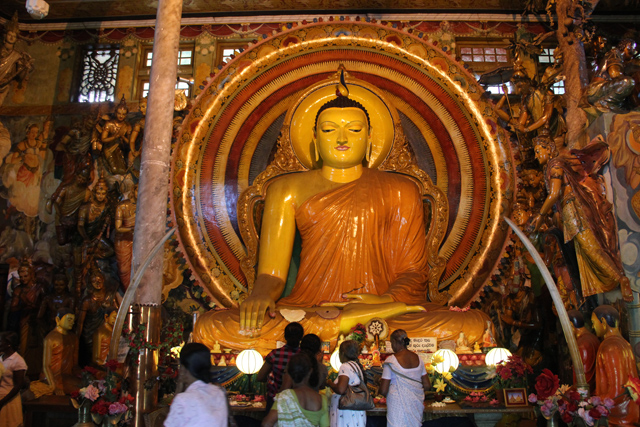 Inside the main sanctuary

The main sanctuary is filled with a huge statue of Buddha that is surrounded by a host of other statues and sculptures which are all neatly painted and brightly decorated.

Two huge elephant tusks stand on either side of the main statue.

Many Buddhist followers will first enter the sanctuary, possibly offer a gift, and then proceed outdoors where they can light candles and burn incense. 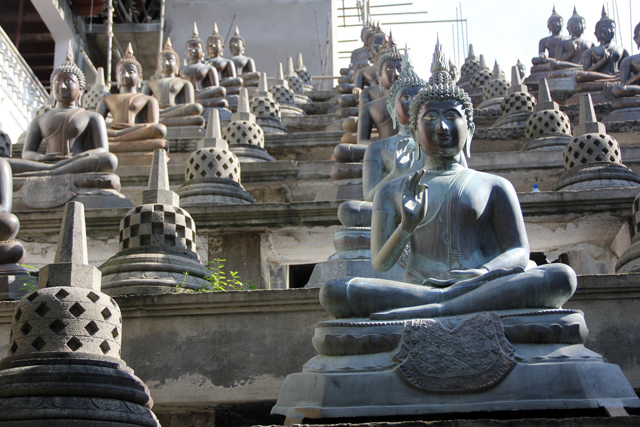 Outside in the courtyard

In the outdoor section, there is a series of steps filled with statues of Buddha making various hand signals as well as stone stupas.

The scene really reminded me of Borobudur in Indonesia, and I couldn't help but think that there had been a very similar influence in the design of both religious structures – Borobudur way outdating Gangamaraya. 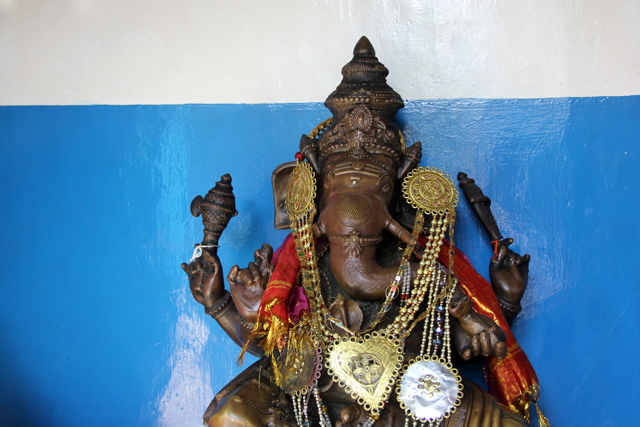 In both design and decoration, Gangamaraya Temple has been influenced by Thai, Indian, Chinese, and local Sri Lankan styles. 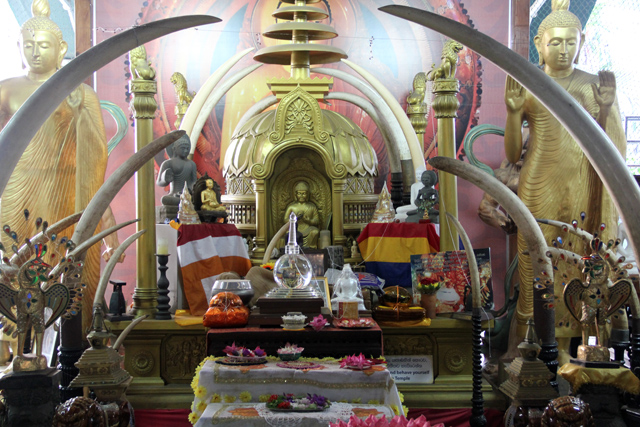 One of the many shrines

There were many interesting and extravagant shrines like the one pictured above.

Gold, elephant tusks, statues, and fresh flowers were prevalent throughout the temple. 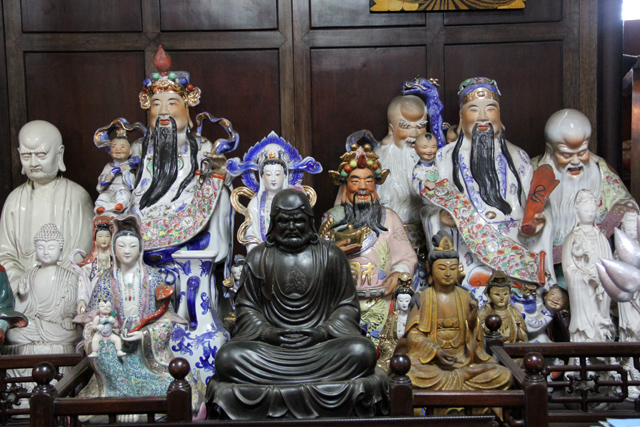 Walking into the Chinese section of the Gangamaraya Temple felt like a complete switch to another location. 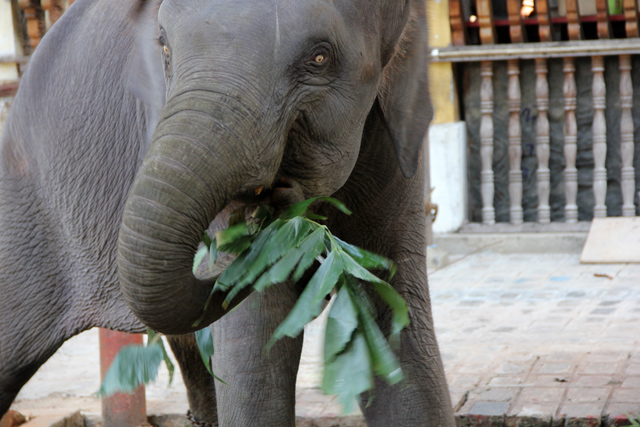 A hungry elephant at Gangamaraya Temple

Just outside of the main sanctuary, surrounded by tables filled with burning candles and incense, and shaded by a huge tree, are a few elephants.

There's also a giant fake elephant sculpture on the complex too, but I preferred the real ones!

After living or traveling extensively in Southeast Asia and seeing many temples, it's sometimes not overly exciting to visit yet another temple.

But Gangaramaya Temple is a top attraction in Colombo, because it's not just a temple, but an entire museum packed with history and art.

I am distressed to see this ad for the Gangaramaya temple still being promoted. Earlier this year, a visitor took this video footage of the young elephant Ganga being beaten https://www.facebook.com/adoptadoginsrilanka/videos/772609309461331/?theater I would like to know whether your company is prepared to take a stand against animal cruelty? DESCRIPTION ON THE VIDEO: Published on 16 Jan 2015 Today I went to feed Ganga bananas like I do once or twice a week when I am in Colombo . His normal mahout was not there instead it was a young, questionably drunk man with a tshirt on that said "if you're rich, I'm single" who was ruthlessly whipping him and scolding him in filth calling him a "hutho" (sp?) ... Three times he whipped him so hard that he broke his stick and had to go get new ones, so as to continue the beating , then he began yelling at me to go away. So I walked around the temple for a little bit then came back, and asked someone else if I could give him the bananas, the mahout said that Ganga was having a bad stomach and couldn't eat them (even though he had just passed some well formed seemingly normal dung), then his story changed to that this particular elephant was actually too dangerous for anyone else aside from him to approach (even though I hug him every week)however five mins later his story changed yet again and he said I could give him bananas if I paid him , ( I have never been asked to pay in the past) i didn't agree to any payment but instead took my opportunity, I walked up to Ganga and he excitedly greeted me like he always does. He happily ate the bananas , even lifting up his trunk and letting me put them directly into his mouth as per usual. (Such a dangerous elephant) Then as I was leaving the mahout was suddenly acting very nice, as he again asked me for money. I refused, and he became very aggressive and started shouting at me, he told me I was never allowed to come back to the temple , with a lot of swear words mixed in. I truly felt sick watching the beating unfold. Unfortunately I wasn't able to catch the worst of it on video, including the harsh gouging with the Akhusa which he put aside when he saw me watching , however the whipping and harsh ear pulling continued relentlessly until he realized I was filming, and resumed every time i stopped filming. Now what I would like to know is A. If this is how they are treating an elephant in a temple, and a famous temple for all the many locals and tourists that visit it to see, how are they treating the ones not in the temples and when no one is watching . And B. How do I get this idiot fired.

The video is only a few mins of the beating that was going on for over 20 mins, when he realized I was videoing he calmed down for a bit but as soon as I would stop he would resume the beating with vigor. Ganga is 8 and is a very gentle natured and amazing juvenile elephant. I trust that the temple will do the right thing and fire this man.

Mark, surely you mean it is not EVEN a temple - how could a Buddhist temple of all places treat an elephant so cruelly, and how could you just take pictures of it and describe it as "hungry" when it is clearly in a lot of distress? For those that haven't seen it, this "hungry elephant" is shackled front and back so that it simply rocks back and forwards with a constant look of pain and distress. Shame on this so-called temple and on you for your mindless post.

Hey Angus, I'm not an animal expert, or a wildlife conservationist, I'm a traveler. Nor do I mangage the temple or their practices.