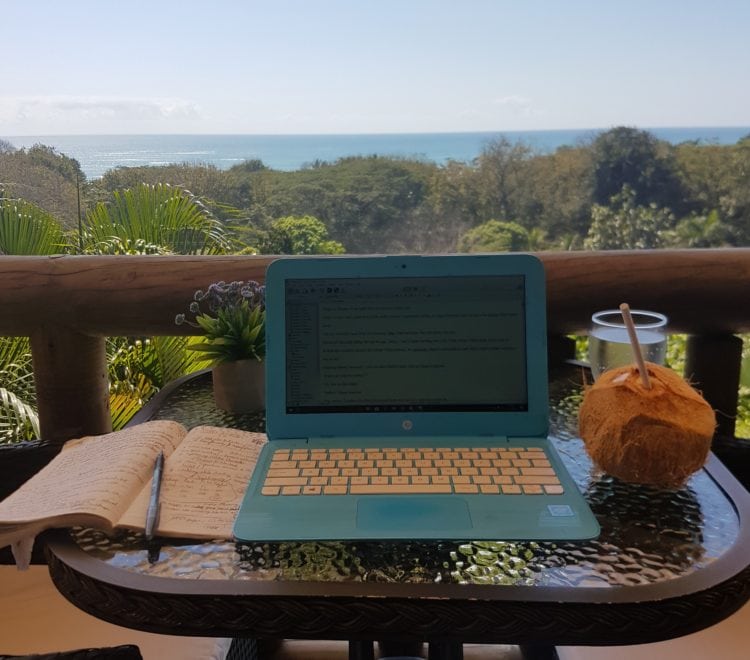 Not a bad view in Santa Teresa, Costa Rica

Editor's Note: This guest post is by Nick Milne, author of the new book Life Expands: A Travel Comedy Romance.

From surfing in shark-infested South African waters to meeting the King of the North on a Sri Lankan beach, my eighteen-month trip writing a book across seven countries was full of sunsets and surprises.

In this post, I’ll share my top seven tips from my travels to help you leave behind your rectangular desk and monochrome office.

Set sail for a hot pink sunset setting over a balmy sea, breathing in the salty air and sipping on a fresh coconut.

1. Choose Cheap and Cheerful Countries (at the right time)

You could close your eyes, spin a globe, slam down a finger, and you might get lucky choosing a destination.

But you probably won’t. You’ll probably end up in a deserted beach town watching episodes of Friends staring out at the stormy Atlantic Ocean and realize, “Ah, Lisbon in early March, not great for surfing and sunshine.”

Don’t do what I did and choose a location for an extended stay based on a whim.

Setting off on a long adventure requires preparation and research. Know your travel budget, destinations (and visa situations), and their shoulder seasons.

If you can arrive before or after high season, you’ll benefit from decent weather and lower prices.

In each of the cities of Medellin (Colombia), Hiriketiya Bay (Sri Lanka), and Cape Town (South Africa) I spent less than $1,000 a month for my room (Airbnb), food, drinks (including alcohol), and the odd sightseeing trip.

I spent double that in Costa Rica and Spain, and probably had half the fun.

To be on the safe side take cards from two different banks and research digital banks, like Starling in the UK, as some offer free international withdrawals.

Choose cheap and cheerful countries at the right time of the year and you will be off to a great start. 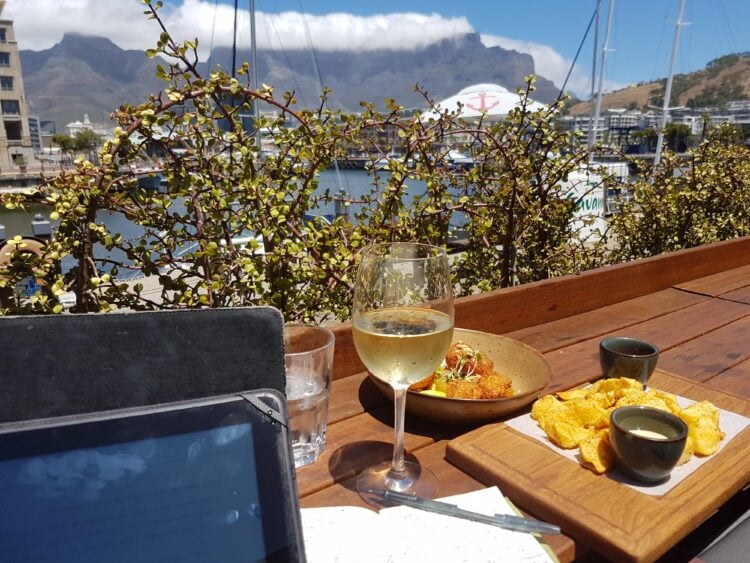 Choosing accommodation is like dating. Don’t commit too early before you know what you’re getting into.

You won’t know what it’s like until you get there and you might find advertised photos were taken with a good filter and flattering angle quite some time ago.

The “charming sound of nearby wildlife” might be a roving pack of wild dogs, so book for a couple of nights to get a feel for the people and place.

If you like it, since you're already there, striking a longer-term deal with locals will be easier. Or you move on. It wasn’t the one.

I learned this the hard way. Booking an Airbnb for a week in Ella (Sri Lanka), my place was literally on the wrong side of the tracks and required a 30-minute walk past howling street dogs to enter the town.

When I moved to Hiriketiya, I stayed for two nights at an Airbnb on the edge of a beautiful bay.

Although pleasant, it was too busy for me. Friends recommended a co-working space that was opening up, and I struck gold.

I was the first guest at the dreamy Verse Collective; a co-working space and hostel on the coast.

I stayed for three months writing my book, surfing, and sipping on G&Ts watching the sunset with new friends.

Verse was recently voted one of the top ten hippest hotels in the world by the UK’s Sunday Times, and despite the recent shocking events in Sri Lanka, I would return to write my next book. 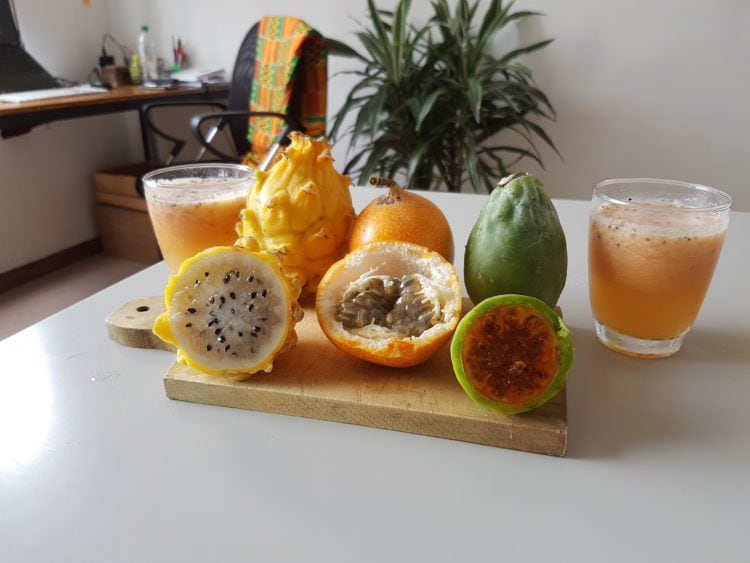 And what Colombian Fruits do we have here

Many of us dream of escaping the 9-5 and don’t want to carry our work with us to a remote sultry paradise. However, it’s never been a better time to work remotely.

From the Selina chain with locations across Latin America to smaller independent spaces like Verse in Sri Lanka; you’ll find hidden co-working spots from which to work and play across the globe.

Working or not, I’d recommend taking time off from your phone.

My phone broke in Sri Lanka and being disconnected for four months was as refreshing as the salty seas.

You’ll probably want to take photos and check in with loved ones now and again, but take time to enjoy the sunsets and put the phone away.

Embrace the bubblegum skies and people around you.

Eating local food will connect you to every local culture, open up your tastebuds, and save you a few bucks.

I wasn’t a fan of Kerala in India – too busy and noisy for my sensitive Scottish ears – however, sampling delicious coconut curry for breakfast and chatting with locals was a highlight. I was almost making up for my sunrise beach run hurdling fishermen’s feces.

What was that spikey Colombian fruit?

I didn’t know so I went on a food tour with La Mesa in Colombia, and enjoyed learning about food provenance and Colombian cuisine.

Food tours are increasingly popular – seek them out.

Learning basic phrases in the local language will help your travels, and be invaluable if you choose to travel slowly.

Costa Rica appeared only to have expensive shuttles transporting travelers across the country; however, you can take local transport if you ask around and do some research.

An ex-girlfriend used to call me Militant Milne as I loved an itinerary (a consequence of being a Latin American luxury travel consultant).

Shedding my militant tendencies for a trip from Arenal (volcano) to Montezuma (beach), I didn’t stress about timings.

Subsequently, I saved $50, nearly ended up accidentally leaving the country, and made a new friend. 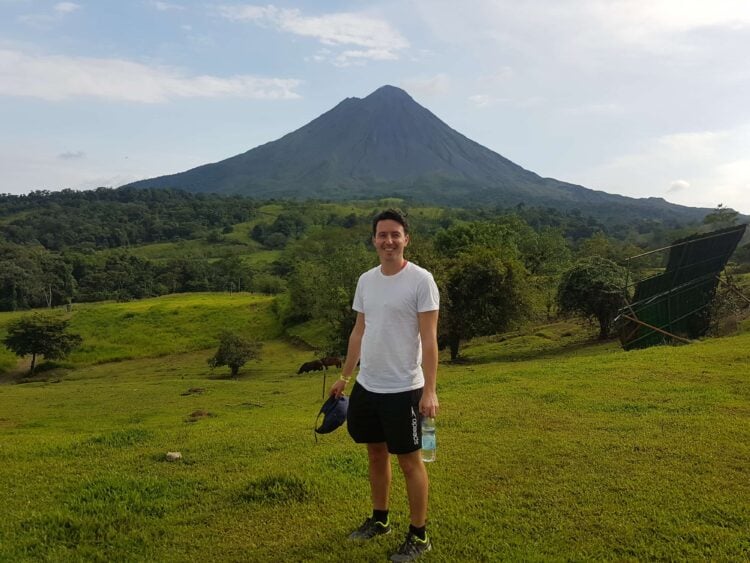 A volcano and me before meeting Abelina

Taking a local bus weaving through the stunning Costa Rican countryside, I missed a connection but found a bakery with delicious pastries.

Upon arrival at the port town, I followed the crowd; a huge line waiting at the dock for a massive boat.

Confirming this was the queue, I stood out in the sweltering heat for an hour before attempting to buy a ticket for the short jaunt across the sea.

However, it turned out the boat was actually a cruise ship sailing to Guatemala.

Normally, I’d be annoyed at my failure to know there were two ports (and idiocy of not recognizing a cruise ship), however, if I’d organized everything, I wouldn’t have met Abelina.

On my bus to the beach, my Costa Rican neighbor started a conversation about how much the bus cost.

After learning I’d been overcharged, we chatted, and she told me she was one of 15 children.

I joked it was a soccer team and she agreed, plus a referee, manager, physio, and one sub.

Telling me about recent landslides, her family and life in rural Costa Rica, we merrily chatted away in pigeon Spanish. She reminded me of my grandma.

She pulled me to the front and ordered the bus driver to give me my change as overcharging gave a bad impression of Ticos (Costa Ricans).

Giving me a hug, she crossed my palms with colones (the Costa Rican unit of currency) and walked away saying what a pleasure it was to chat. Militant Milne wouldn’t have met Abelina.

Be Shark Smart in South Africa

5. There will be Ups and Downs

One moment you’ll be alone, hungover in a coffin-like dorm cursing your life choices, the next you’ll be slow-dancing on the beach with a svelte Swedish yoga teacher.

Don’t get too down when things seem bleak or get too excited when you’re with the yoga teacher.

Traveling involves risks, and you’ll invariably have a dodgy stomach at some point, but you’ll marvel at the stunning scenery and adrenaline-filled activities.

One day, flailing in whitewash in Cape Town and struggling to surf – not helped by the fact I'd put my wetsuit on the wrong way – I was down, making excuses to myself to avoid the shark-infested water.

However, building up the courage to go out again the next day – and after putting the wetsuit on the right way – I enjoyed the best day surfing I've ever had; even seeing a wild beast frolicking twenty meters away. 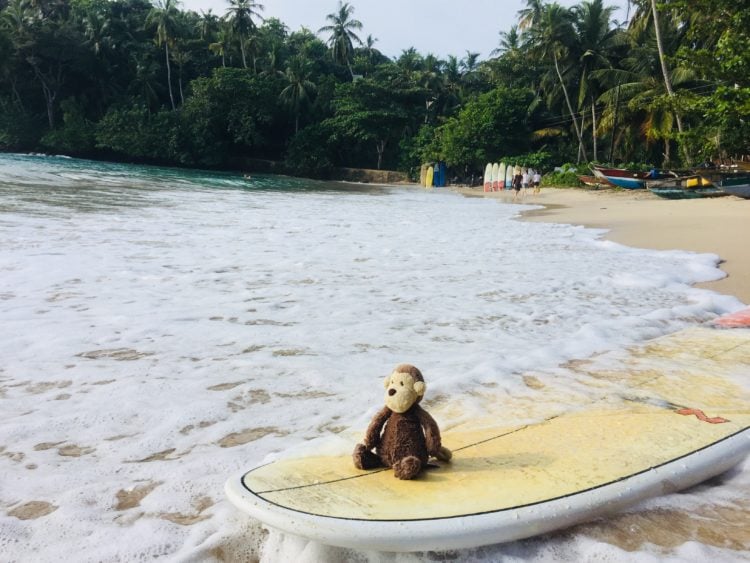 Better than me surfing in Hiriketiya

Always wanted to learn a language? Write a book? Or surf salty seas? Do it.

A favorite quote of mine is:

Real life is better than watching fictional characters leading fictional lives on TV or in the movies, so have the courage to do things that scare you.

I had trust issues with being in the open water, but faced my fears and learned how to surf in Sri Lanka.

Getting up at 6 am, I’d venture out into blue waters and surf warm waves. I loved my routine of yoga, surfing, and having breakfast by the sea before writing.

On New Year’s Eve 2017, the only other guy on the secluded beach walking towards me looked familiar; however, I couldn’t place him.

Hearing a British accent, I definitely knew him. Was he a friend from school? With him smiling awkwardly at me, my brain clicked. It was Jon Snow from Game of Thrones.

The King of the North stalked me throughout the day, nearly spoiling my start to 2018 by skinny dipping and distracting the Swedish yoga teacher I was trying not to get overexcited with. 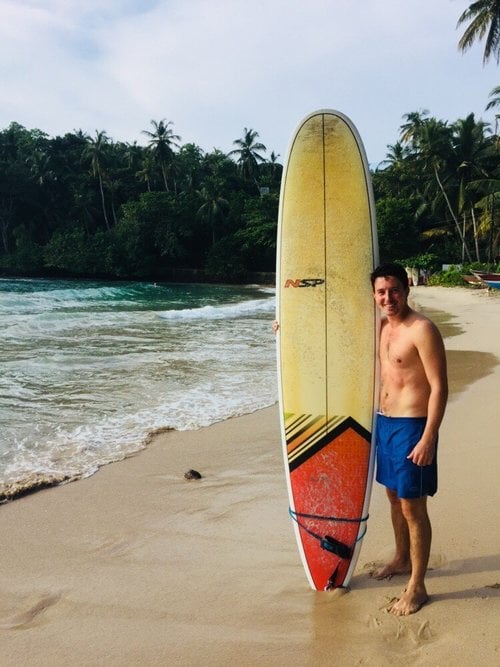 7. Look After People and the Planet

Don’t neglect either. Be kind to those traveling with you and keep in contact with those at home.

Don’t get stuck with people who you don’t like and search out the people who brighten your days. I’ve met my favorite people traveling – you’ll find yours.

Familiarize yourself with local customs, top up your water bottle before going on long trips, and consider what you consume and throw away. Travel with environmentally conscious organizations like Kagumu Adventures in Colombia.

And finally, if someone is trying to sell you something you don’t want, pull out your water bottle, fight fire with water, and try selling them your water. It’ll either confuse them or make them laugh.

Nick Milne is the author of a new book Life Expands: A Travel Comedy Romance.

Nick Milne is originally from Edinburgh. A former Latin America luxury travel consultant, failed entrepreneur, international charity worker, traveler, and writer, he has had the fortune to visit over 50 countries but the misfortune to lose his Scottish accent on the way. He is the author of a new book Life Expands: A Travel Comedy Romance. Learn more at www.lifeexpands.com