A rainy day or dark-cloudy skies won't keep Ryukyu Mike cooped up in his house waiting for the sunshine to burst out all over.

On a recent rainy Sunday in June, he grabbed his backpack and camera and headed to the southern part of Okinawa and visited Gyokusendo Cave, the second largest series of caves in Japan.

The cave meanders through 5 kilometers (roughly 3 miles) of limestone far below the steaming earth above.

Visitors have access to 890 meters of well-lighted and safety-railed passageways.

Signs warn you not to shout or blow whistles, probably so as not to disturb some of the fragile stalactites (sharp stone icicles) numbering in the thousands that could come crashing down if you did. 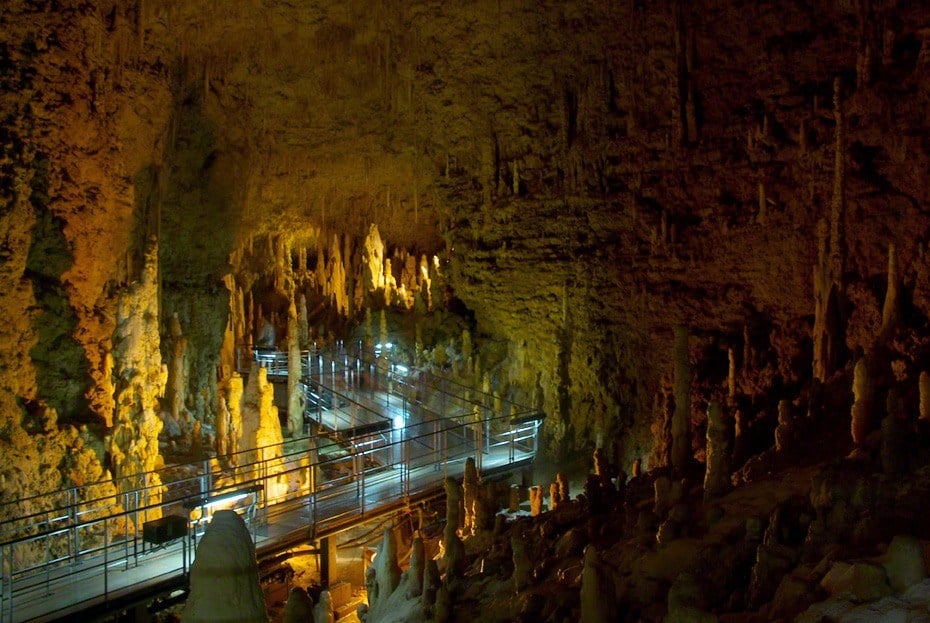 Steel walkways meander through the cave.

Just a few meters from the entrance, you feel as if you've entered an air-conditioned room.

Stainless steel stairs and walkways make the journey through the cavern convenient but, they can also be slippery in spots where moisture has accumulated. 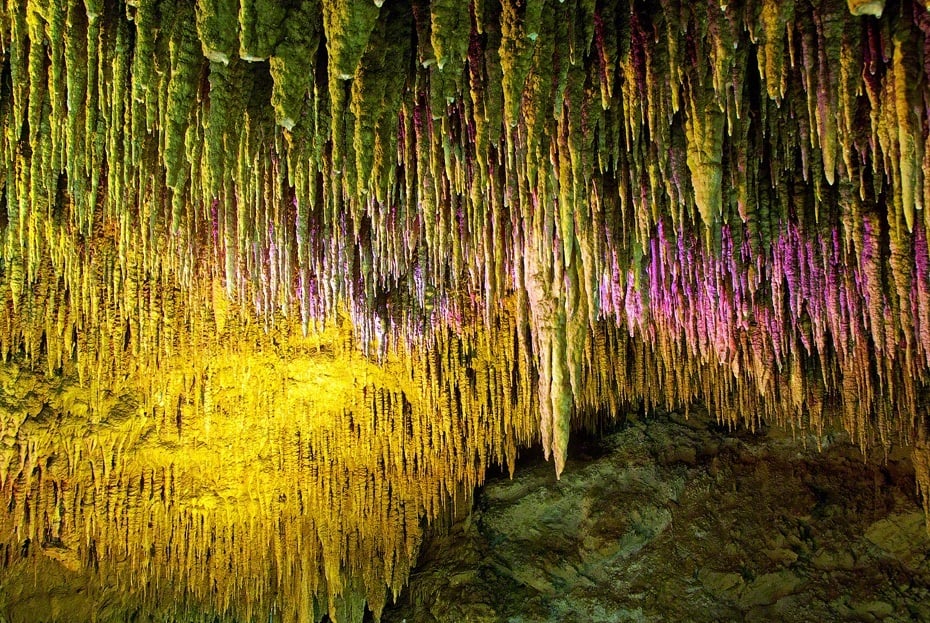 Stalactites grow at a rate of 1mm per year and some of the ones seen in the cave are several meters long.

Gyokusendo cave is estimated to be over 300,000 years old.

Motion detectors control some of the lighting as you travel through the cave and throw an assortment of colors on certain key attractions.

In 1974 one of the classic Godzilla movies (Godzilla vs Mecha Godzilla) was filmed here.

In parts of the cave stalagmite take on monstrous shapes and you can let your imagination decide what they might look like. 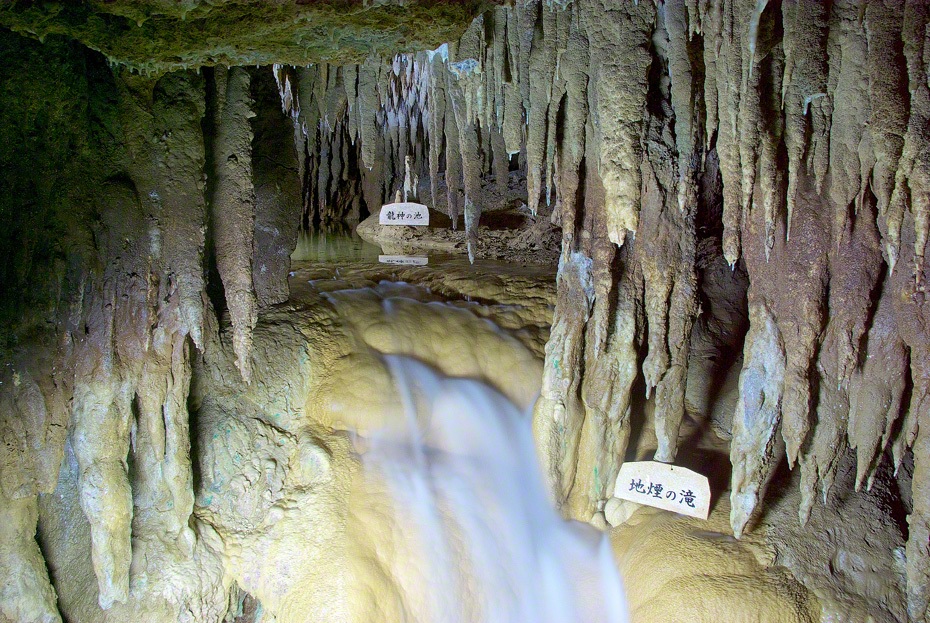 One of several streams flowing through the caves.

Small streams and waterfalls are seen at a couple of locations as you travel through the maze.

The one in this photo is at about the halfway point.

There's nothing quite as soothing as the sound of a brook and waterfall inside a cave.

This would be a choice spot to camp overnight, if such activities were permitted, the babbling brook and sounds of miniature waterfalls echo through the cave. 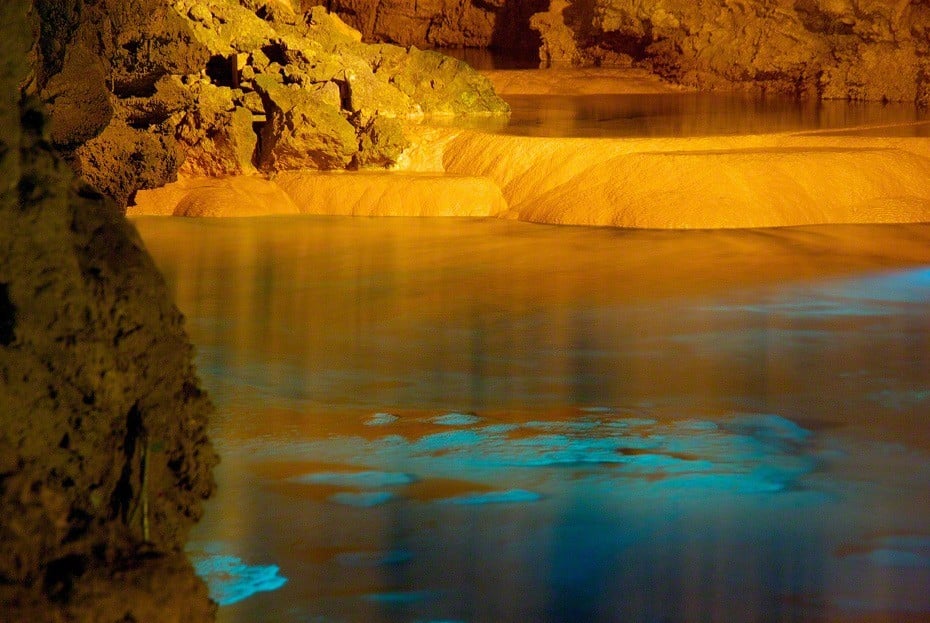 Underwater blue lights and external flood lamps accentuate the small sandbars formed by a stream flowing through the caverns in this scene.

Leaving this scene the walkway leads back up gentle slopes and stairways towards the exit.

Whether it's raining or the sun is shining, after spending an hour underground, the first thing you'll notice as you hit daylight above is the heat and humidity.

Mother Nature's air conditioning system has been left behind you.

Reportedly discovered in 1967 by a research group from a mainland Japan University, this treasure of a cave was probably well known to local Okinawans many years before it became the major tourist attraction it is today.

It appears the designers and planners did a fine job of balancing the need for tourism and concern for the wildlife inhabitants of the caves.

There are displays of some fish, reptiles, bugs, bats and other cave-dwelling critters along the walkways but in the labyrinth of uncharted areas the tourists never get to see, there are a few miles of safe haven for critters to do, whatever it is cave-dwellers like to do while the intruders meander through their living room.

About the Photographer: Michael Lynch is a photographer and freelance writer living in Okinawa, Japan and he contributes to dozens of online sources. For more information, visit his website: www.mikesryukyugallery.com

Hi there. I precisely did some net surfing and located this webpage site. I proceeded to go as a result of this net website present and it's seriously outstanding.I truly really have the benefit of your web page.Completely, the piece of writing is in assurance the very greatest on this surely worth though topic. I added it and i?m hunting forward for your approaching site articles or blog posts or web site posts. I also noticed that your internet website has some extremely good linking accomplished to it. I will right apart take hold of the rss feed to remain knowledgeable of any changes. Remarkable data you obtained correct here.Make sure you protect up-date on your exceptional publish.Thanks a ton.

i have been okinawa 3 time, very interesting please ,great person ,I ll be back.

Jack,Thanks. I got busy and haven't visited here in awhile. Dave does make my photos look great on this site. I'll be back again.

Beautiful pictures, those two pictures of streams are just surreal.

Thanks, Lili. Hopefully I'll have more for your viewing in the near future.