This is part 2 (of 2).  In case you missed it, part 1 was Extreme Horseback Riding in Valle de Cocora. 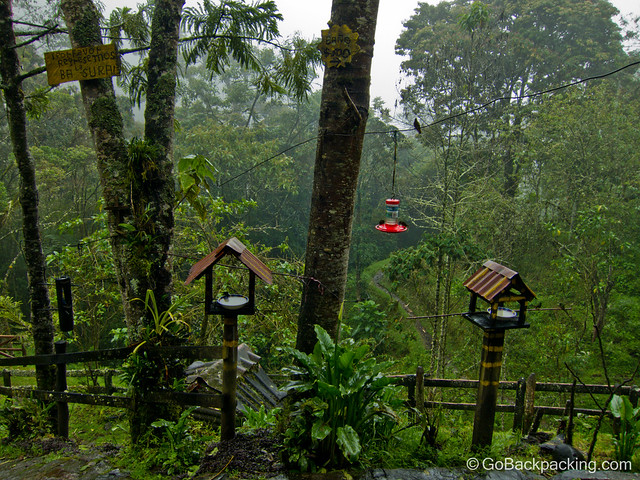 View of the trail from a guest house

After enjoying hot chocolate, cheese, and a break from the rain, we snapped a few photos of the hummingbirds fluttering around, and set about extracting ourselves from the forest on foot.

It quickly became clear that the Aussie was going to be the slowest, as he tried to balance himself with a hand on the ground while his bare feet slid down through the mud.

The Colombian girl was nursing a bruised knee from the horse who kicked her on the way up, so I expected she'd be slower than normal too.

Within five minutes, the two Swiss girls and I had lost track of the others.

They didn't seem concerned about splitting up, and I much preferred to keep a faster pace so we could get back to Salento and out of the rain sooner rather than later. 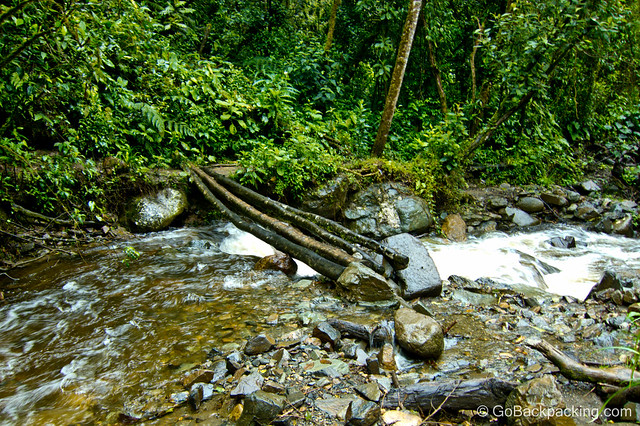 Footbridge on the trail through Cocora Valley

We had received general guidance that to continue on the trail, we'd backtrack to where we left the horses, then go down a little further to a fork in the trail.

Backtracking required crossing the river, and this time I didn't have Canario, my trusty steed, to assist.

The four logs in the photo above were our footbridge.

Covered in moss and moisture, I crab-walked across to ensure I didn't end up in the water.

Thankfully, it turned out to be our only river crossing on the way back.

At the fork in the trail, there were a bunch of dilapidated, barely legible signs.

The Valle de Cocora trail was in dire need of a  makeover. One of the signs indicated the elevation, about 2,500m.

And we would all begin to feel it as our ascent got underway. 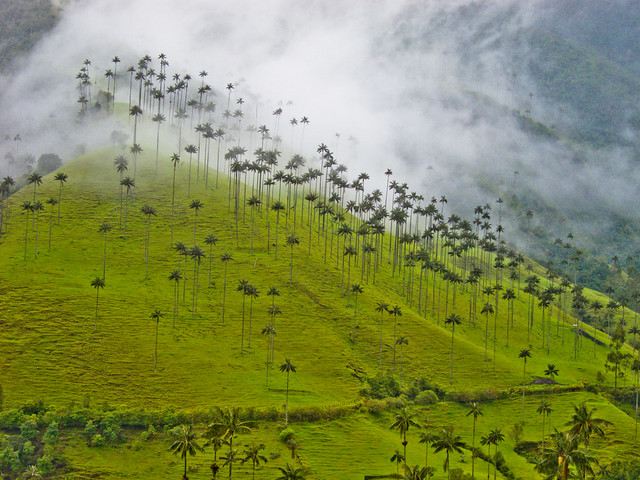 The wax palms of the Cocora Valley

Thick with mud, and a noticeable amount of manure, the trail zig-zagged it's way up a mountain.

We did our best to walk the edges, and not get bogged down, but the pitch and my impatience meant I'd often step in 6 inches of mud if it meant traversing a section faster.

At times, I thought of the Aussie guy navigating the trail in his bare feet.

Remember the scene in Romancing the Stone where Michael Douglas and Kathleen Turner get caught in a rainstorm and go careening down the Colombian mountain on a giant mudslide, landing with a splash in a big puddle (2:00 mark in this video)?

Yea, I did too as I tried to wipe images of me losing my grip and meeting the same fate from my mind.

They were on a movie set, we were in the middle of nowhere as far as I was concerned. 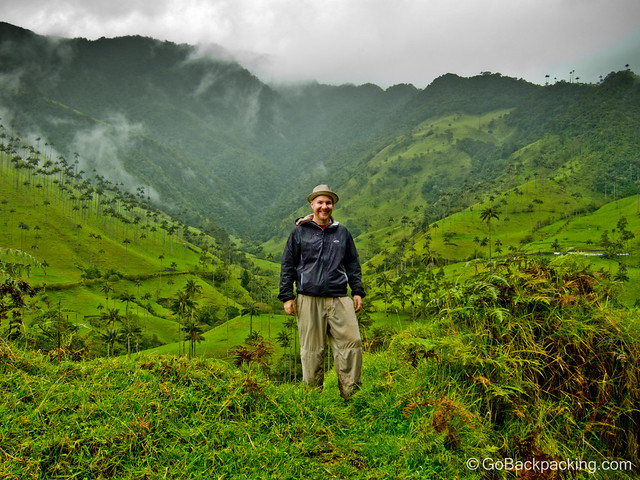 In the end, the views were worth schlepping through the mud and rain

After we'd done what felt like a good deal of climbing already, one of the Swiss girls wondered aloud if we should go back to the fork in the trail, and return the way we came on the horses.

The prospect of having wasted time and energy on our current path, combined with the images of the rickety bridges we'd have to cross, ensured I wasn't turning around.

The rain continued falling, and we continued wondering how much further up we had to go before we would emerge from the forest.

After what felt like hours, but in reality, it was closer to 45 minutes, I spotted a patch of white sky.

A few dozen meters more, and we were at the bottom of grazing land.

A muddy path wound its way up to a fence, on the other side of which was a guest house.  Elevation 2,860m. 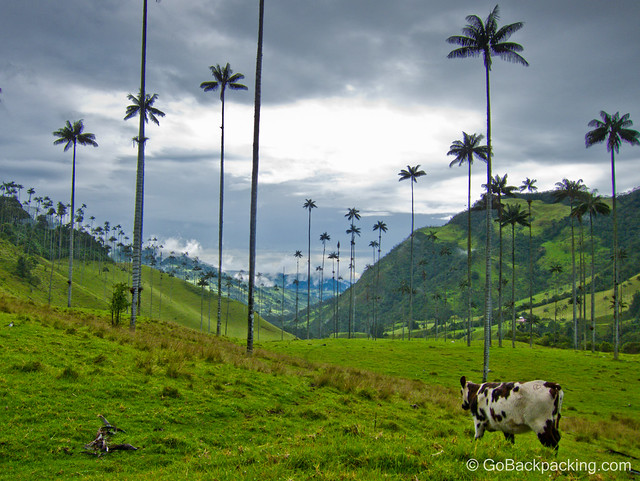 Cows graze in the midst of lush, verdant views

We breathed a collective sigh of relief and took a few minutes to rest.

It would take another hour plus to walk back to the pick-up point for share jeeps to Salento, but at least we were on a flat, open road, and would be walking downhill the rest of the way.

As we finished the hike, the rain let up, and the sun began to shine as if the valley was giving us a warm welcome for having weathered an otherwise dreary day.

Clouds swept through the tops of the towering wax palms; cows grazed down below.

The three of us could not resist taking photos every step of the way.

Great post! I am planning to visit Colombia in November end - would that be a good time to hike the Corcora Valley? I cannot find a definitive answer on google!

Due to Colombia's proximity to the Equator, there aren't really seasons the way you might be thinking of them, it's more about a wet and dry time of year. November would be the end of the rainy season, as the country heads into summer.

That said, it's always wet in the Cocora Valley, it's like a cloud forest, so I think you can visit it any time of year and expect a similar experience.

You did a great job of capturing Cocora with photos! I went 3 years ago and your photos make me want to go back... Anyone looking for travel tips can feel free to write to me! info@diversitours.com. Cheers! -Melissa

Ooooh, so gorgeous. Definitely will try to make it there during our visit.

I wasn't too excited about a hike, but it turned out to be well worth it for the views (and a little horseback riding adventure).

pics are amazing, its truly paradise for nature lovers

Absolutely beautiful... It reminds me of something out of Jurassic Park!!! :)

Thanks Lauren! I felt the same way. It was as green as anywhere I went in Ireland. :)