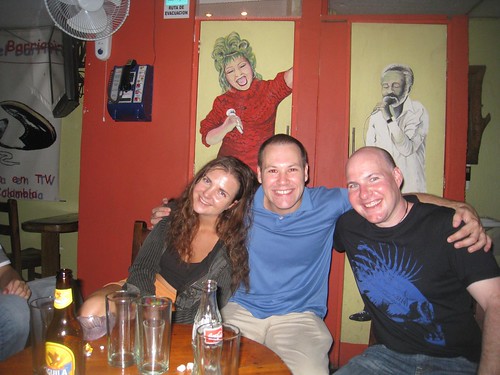 Astrid, Casey (middle) and me in Medellin

I met Casey during my last week in Colombia.

More than a decade earlier, he had left the United States to start his own business in Central America, which surprised me considering how he seemed about my age!

In the interview below, he talks about his move to Costa Rica after college, how the country has changed since he arrived, why a trip to Panama should be on your bucket list, and his first impressions of Medellin.

GB:  Describe your first experience traveling outside the United States.

Casey: My first ever trip abroad was a family vacation to Aruba. I loved it.

Speaking terrible Spanish with Venezuelan tourists, I was very intrigued by the idea of travel abroad, but this visit to a touristy strip of white sand was hardly a real indoctrination into a culture.

My first solo effort was when I studied abroad in San Sebastian, Spain. That was the clincher.

I was the only gringo for miles and professors at my university turned my classes into anti-U.S. rants for my benefit.

I was hooked and wanting more. I only worked for one year in the U.S. upon graduation, then moved to Costa Rica to start my own biz.

GB:  How long have you been living in Costa Rica, and what lead you there?

Casey: I moved in 1998. I can't remember the exact moment when or why I decided on Costa Rica, but at my first and only job, I did some research on the then-very-clunky Internet to see where I felt there were opportunities in Latin America that might suit my web marketing skillset.

GB:  How has tourism in Costa Rica changed during your time there?

Casey: Massively. The changes I've seen in just over a decade are astonishing. Once quiet beach towns are not thriving tourist destinations.

Some have changed for the worse, with crime, pollution, and prostitution run amok.

The type of tourists who visit now are also different, following a natural and well-documented curve that starts with trend-setting adventurers and ends with those types who complain if even the most remote resort doesn't have U.S. grade-A steak and CNN.

I cannot complain since my company has benefited directly from the masses arriving in Costa Rica, but it has also given me insight into just how important it is for countries to carefully plan their tourism infrastructure, building codes, enviro-regulations, etc.

GB:  What do you appreciate most about living and working in Central America?

Casey: The fact that just about any good idea, well-executed, can work. Competition is weak for those who are willing to dig in and work hard.

I also enjoy the fact that most natives to the region force we gringos to look at life differently, slow down a bit and enjoy the moment.

This change of pace and mindset is also probably the most documented negative for many expats and I have my moments too…but the randomness of life here makes things so much more interesting, I'd hate to be without it.

GB:  Why is Panama a “must see” destination for travelers?

1. Native Cultures — Panama is one of the few Latin countries with thriving native cultures.

There are 8 indigenous tribes here, many of whom are living a simplistic lifestyle that hasn't changed in a hundred years.

2. History — Few countries can compare to the rich history, past, and near-present, of Panama.

From the Spanish Colonial days with regular visits by pirates like Henry Morgan, to the country's fascinating separation from Colombia (due in part to Teddy Roosevelt and some Wall Street profiteers), The Canal, the U.S. military presence, Noriega and the U.S. invasion, it's a country with living history at every turn.

Just seeing the Panama Canal in action and a few former military bases is an incredible site.

3. Local Traditions — Panama's rich and diverse culture has been the catalyst for a bevy of traditions, from the beautiful to the bizarre.

Carnavales, a week-long celebration that is Panama's version of Mardis Gras, is probably the most famous.

4. Nature — Most folks don't associate Panama with nature, and the country itself has done a poor job of protecting its resources, but even still the nation is surrounded by lush rain forest and is home to a treasure of bio-diversity.

Nearly everything you can find in Costa Rica can be found here…and then some.

5. Be First — As mentioned above, you can find most of what you'll encounter in Costa Rica…except hordes of tourists.

Very often you may find yourself alone on a lovely hilltop or beach, wondering..”where are the tourists?”

They're somewhere else, obviously…so enjoy it! 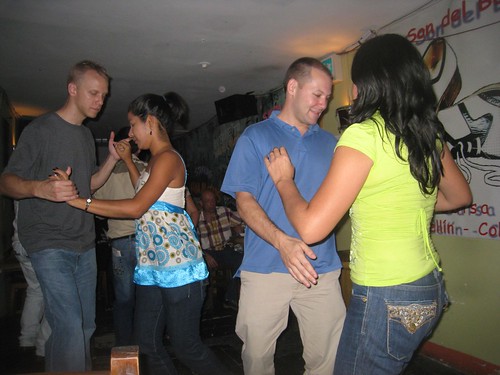 GB:  We met while you were visiting Medellin, Colombia for the first time.  What were your first impressions of the city and its people?

Casey: It was a really incredible trip, and I appreciate your being my guide on 2 occasions.

What struck me first in Medellin was how lovely the city planning is in upscale parts of town, which makes Panama and Costa Rica look somewhat sad in comparison.

The metro system is fantastic. The weather near-perfect. Of course, the women are nearly as lovely as the legends and overall the people are so darn polite.

That's one element I really wish would rub off on Panama.

GB:  If you could wake up anywhere in the world tomorrow, where would it be?

Casey: I'm pretty content to wake up in Pedasi, Panama. That's where I have a B&B with my parents.

It's really neat when we're all working there together, just like at my Dad's hardware store back in rural Pennsylvania…which I HATED :)

The difference this time is that I get to boss my old man around, so that's fun.

Seriously though, I love being in the countryside of Panama where neighbors are neighborly, doors regularly go unlocked and beer is $.50.

If I could press a button and be somewhere else, I'd like to zip down to Medellin more frequently and am itching to get back to Guatemala. What a magical place that is!

I really like panama and i feel it is a great small country for the alternative backpacker that wants low prices and lots of things to do and see..I own a small hostel in David Panama, a place always skipped over by the guide books but it is really a great location, near beach mountains rain forrest hot springs rivers waterfalls and more..my place is bambu hostel, with a pool and other flourishes that makes it nicer than average http://www.bambuhostel.com

I opened bambu hostel in david panama 2 years ago, i totally agree with you about Panama, i have not been to columbia but i find the people there very friendly and helpful. Dont overlook David it has a lot to offer and is near amazing mountains beaches and rain forest stop by anytime to www.bambuhostel.com take a swim and have an ice cold Panama Beer

MPM - thanks for stopping by. It's amazing how quickly tourism can change a country and culture. That's why I decided to enjoy Medellin for 6 months instead of just a week as initially planned.

This really made me reminisce on the old central america. I went to Costa Rica and Panama in 1995!

And I remember some of my older friends saying I blew it and missed the good times. Ha.

Hey Carl - let me know if you didn't reach Casey and I can give you his email address.