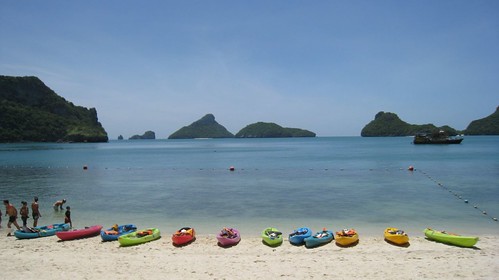 The real life inspiration for the beach in Alex Garland's novel, ” The Beach,”? is part of the Ang Thong National Marine Park. As I was finding the cost of living noticeably higher in Thailand than Nepal or India, I decided to adopt a more prudent approach to my sightseeing. In other words, Mr. Ung's jungle tour stringing together a bunch of small sights was out, and a day of sea kayaking was in. 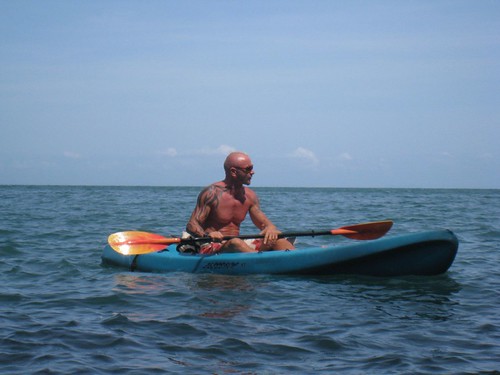 I was picked up in a nicely air-conditioned van and shuttled to the pier where we boarded our big boat for the day. Our tour leader was the burly, tattooed Angus, wearing a Sex Pistols t-shirt. Later, we'd learn he'd been living in Thailand for the last 18 years. I sat with a group of young South African guys. We had a small group, just a few more people than the minimum required to set sail, but not enough to feel like it was crowded, or would require us to take turns with the kayaks. 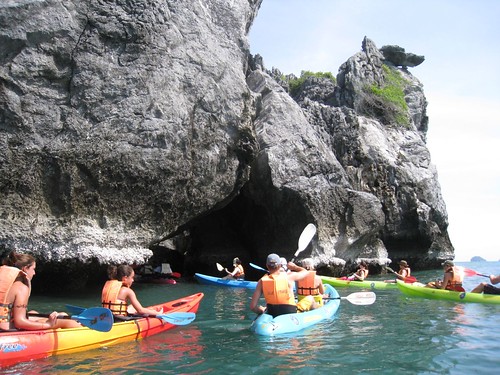 After two hours of cruising to the northern end of the archipelago, we set down anchor and jumped in the kayaks. I paired up with the only other single traveler on board, an older German man. We followed Angus' lead and weaved our way in and out of the limestone islands. The water was quite calm, which made the paddling feel almost effortless at times. After 45 minutes in the water, we got back on the boat and started immediately jumping off the second level. The South Africans went a step further, gaining an extra meter or two by climbing on the roof, but I had visions of falling off so I kept my efforts low key. 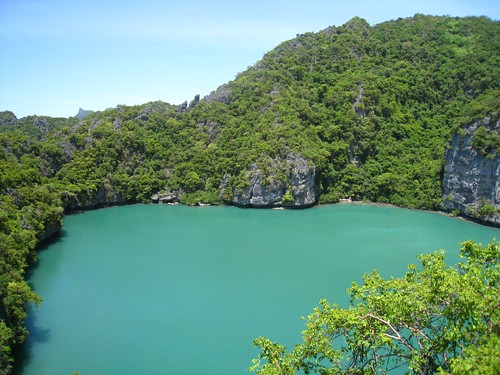 As we ate a tasty buffet lunch including chicken and vegetable curries, we motored our way south through the islands, anchoring at the beach entrance to Talay Nai (the lagoon within the mountains) a green salt water lake on one of the islands. It was a short walk up some steep stairs to get there, but the the views of the lake and surrounding islands were wonderful. 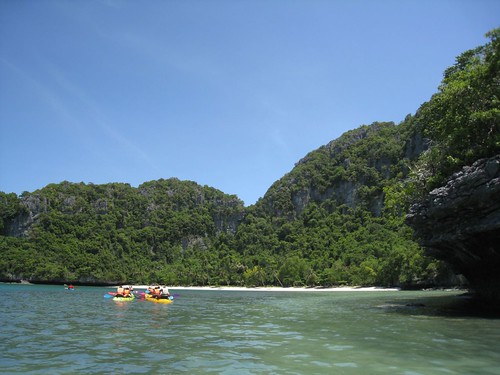 When we returned to the beach, the crowds from other boats had left and we had it to ourselves. We lounged in the water for awhile before taking the kayaks out for a second paddle. On the second trip it felt like we covered more distance, and I started to feel a bit worn out from the paddling. We took a few more leaps from the boat and returned to Kho Samui. 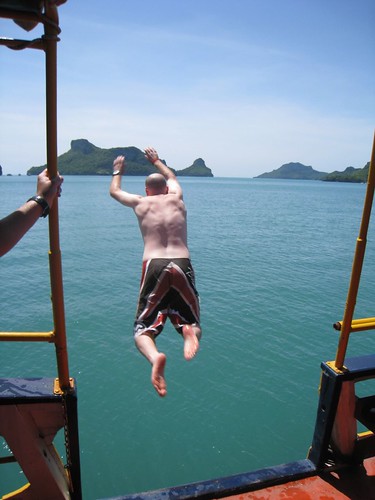