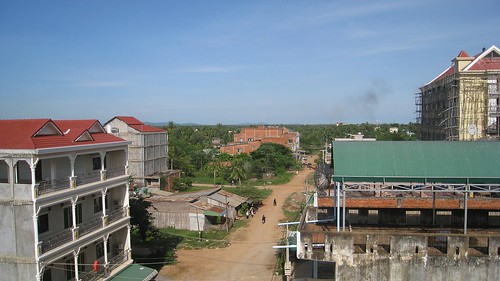 Phi-lay sold me on staying another day in Battambang, and he did it through being such a sincere and friendly person.

A lot of drivers and guides could learn a thing or two from such a man. It wasn't just Phi-lay though.

I was enamored with the moto rides through villages and hearing the “hellos” of little kids.

I knew my Cambodian experience was being defined in the countryside around Battambang, not the Angkor Wat tourism of Siem Reap, nor whatever lay ahead in Phnom Penh. 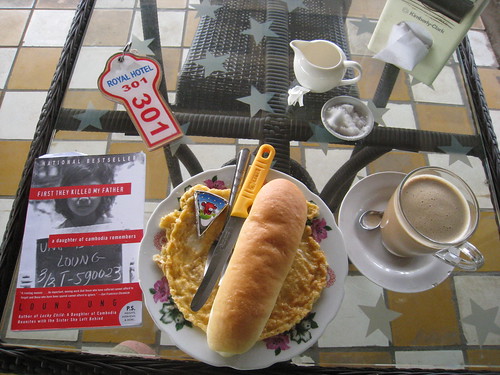 I managed to be up by 8 am for a breakfast of bread with cheese and coffee with fresh milk on the roof.

Phi-lay met me at 8:30 am and took me to a locals' morning food market (not the big Central Market).

I saw a dog's head being cracked open with a cleaver, fish and frogs being cleaned, and plenty of meat and entrails on display inside a building.

Live snakes, snails, and fish were also for sale. But my personal Moby Dick, the scorpion, was nowhere to be found. 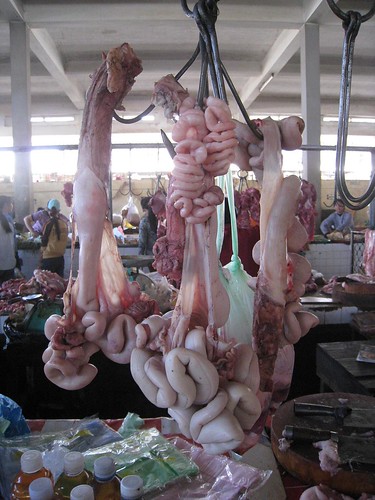 Next, we motored on paved roads out of town and through villages.

Our first stop was a crocodile farm where the crocs were so motionless the first few minutes, I thought they were all statues (and I was being duped).

Phi-lay disproved my feeble theory by tossing some crumpled leaves into the pit toward a croc with its mouth open wide. To my surprise, it instantly snapped its jaws shut.

Meanwhile, a guy was up a palm harvesting coconuts along one of the farm walls! 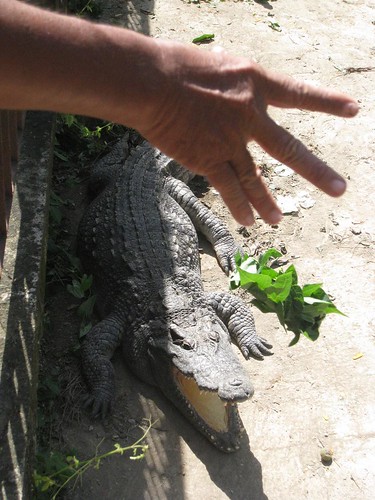 We passed one of the former Khmer Rouge hospitals where Phi-lay had stayed as a child.

We stopped near a temple for a rest break. Phi-lay bought some dried snake, which was heated up over a small flame before being ready to eat.

On a foodie roll, I tried some when offered. It had the consistency of jerky, and a distinct snakey flavor which was certainly all its own (as opposed to chicken). 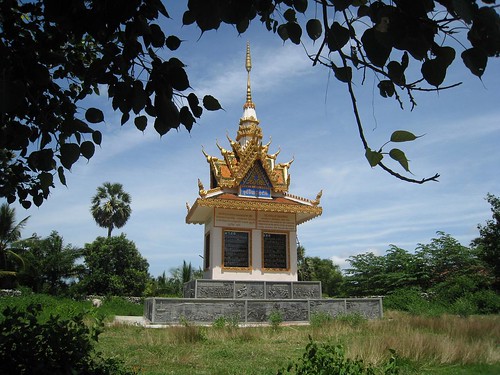 We visited a killing field where over 10,000 Cambodians lost their lives.

We slowly walked around the stupa which was still a work in progress.

Sculpted reliefs depicted the difficult daily lives of the people under Pol Pot's reign, including the long hours toiling in fields, and various means of execution and torture.

The most gruesome image for me was a baby impaled upon the bayonet of a rifle being waived in the air. 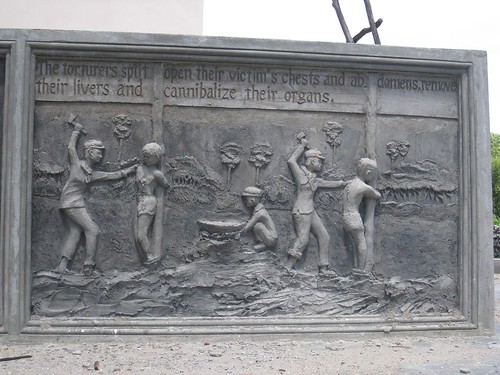 These sights are so solemn, especially when with a survivor, yet I sense a resilience in Phi-lay and the country.

In spite of government corruption and poverty, I hope for nothing but the best in Cambodia. As a show of appreciation, I paid Phi-lay double the cost of the two tours.

Money matters out of the way, I washed up at the hotel and awaited a ride back to his family's home for another special meal.