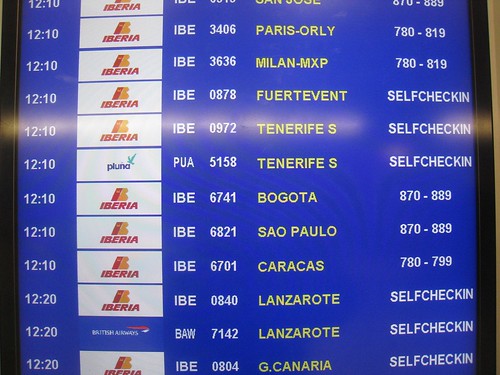 Concerns on my mind during the Madrid metro ride to the airport:

I arrived at the airport, which was huge, but fairly new and well signed. The toilets have too many urinals and not enough stalls. I hate auto-flushing toilets (the urinals are OK). The pharmacy doesn't dispense antibiotics without a prescription, unlike in France. I took two Immodium and hoped for the best. Ate a Serrano cured ham and cheese sandwich. Bought water and snacks. Still have 20 Euro left. Took airport train to satellite terminal, hustled to Gate U55, waited 15 minutes. Boarded flight, seat 11A over middle of the left wing. Seats are a bit small/cramped, my most comfortable flights are behind me (Air Tahiti, Thai Airways, Air Qatar). The man sitting next to me is big enough to require a seat belt extension, which also means he's big enough to noticeably encroach on my limited space. I am guessing he is as uncomfortable, if not more so, than me. We're taxing to the gate, running about 15 minutes late. 9hr 45min flight time, the last long haul of my journey. 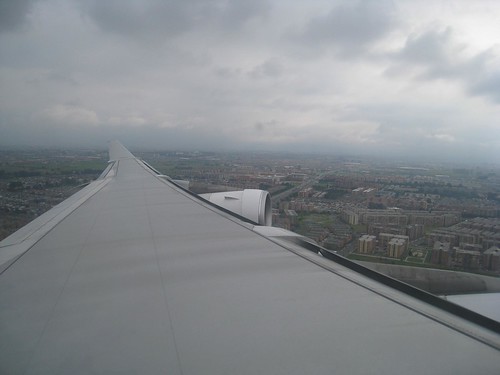 We touched down in Bogota without issue. I almost didn't want the flight to end. There is an intangible quality to being in transit, especially when making such a big leap to a new continent and country. I was trying to savor the excitement and anticipation that comes just before landing, especially since my next long flight would be back to the United States.

The uncomfortable cramps which accompanied me the whole flight continued after I disembarked. I made a strategic decision to go through immigration before using the restroom so I could take advantage of my seat near the front of the plane. I was nervous about my lack of onward tickets ever since the South Africa debacle, but when it was my turn, everything went fine, I received a 60-day Visa, and I breathed a sigh of relief, before seeking out the restroom, collecting my backpack, and passing through customs. 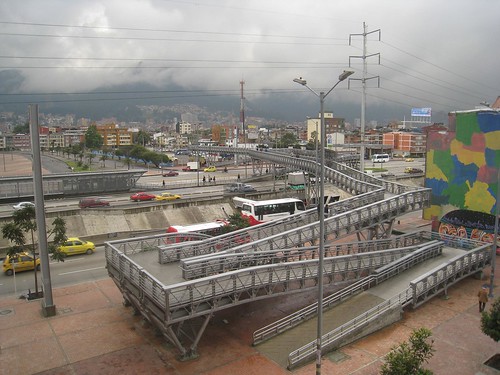 I changed $20 and 20 Euro into Colombian Pesos, and used a great service which estimates your taxi fare to ensure you are not ripped off. You simply give a guy the destination address, and he hands you a small ticket with the estimated fare which you then show the taxi driver. It was about a ten minute ride to Laura's apartment, which featured a locked door and a private security guard in the lobby. The guard called up to her and I received the green light to take the little elevator to my first Colombian couchsurf.