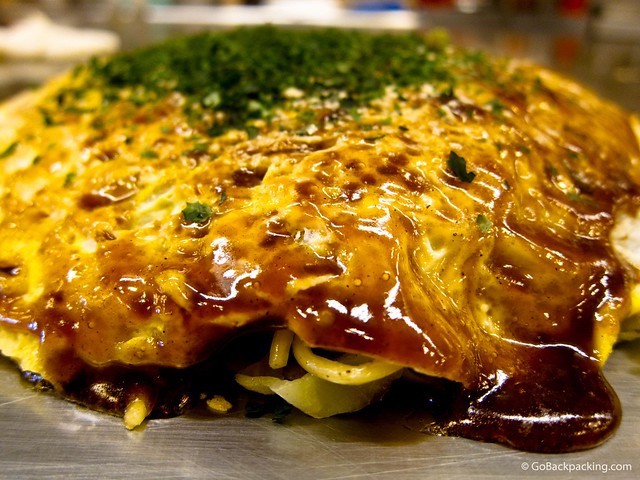 As I was already planning to visit the city's A-Bomb Dome and memorial peace park, tacking on a foodie adventure to try okonomiyaki in Hiroshima was a snap.

Using my Japan Rail Pass, I took a two and a half-hour bullet train ride from Kyoto, and arrived just in time for lunch.

I took one of the city's trams to an area of okonomiyaki restaurants recommended to me by some bloggers on Twitter.

I walked into the first restaurant I saw and took a seat at the counter facing the kitchen.

Traveling solo in Japan is especially fun for foodies because so many of the restaurants seem to have open kitchens.

Instead of playing on my Blackberry or trying not to seem bored, I can spend my time observing the chefs at work. 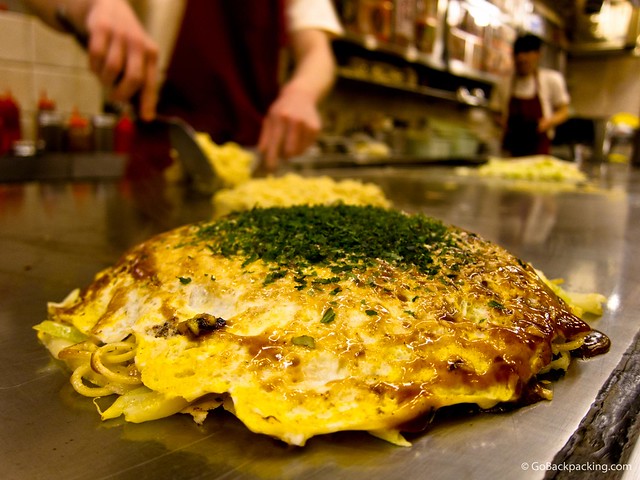 Sitting at the counter, I ate my okonomiyaki right off the grill.

Several line cooks were working in the kitchen, and each had responsibility for a specific stage in the assembly of the giant Japanese pancakes.

For 750 Yen (or $9), I ordered a standard preparation with noodles (like spaghetti), pork, egg, cabbage, and bean sprouts.

I love bean sprouts! The only other time I usually eat them is with Pad Thai.

My photos don't seem to capture the monumental size of okonomiyaki appropriately.

The finished product is served to customers at the counter, right on the grill, keeping the whole thing warm while you cut chunks off to eat.

Eventually, I did consume my entire serving, which was the fuel I needed to explore Hiroshima's peace park on a cold Winter's day. 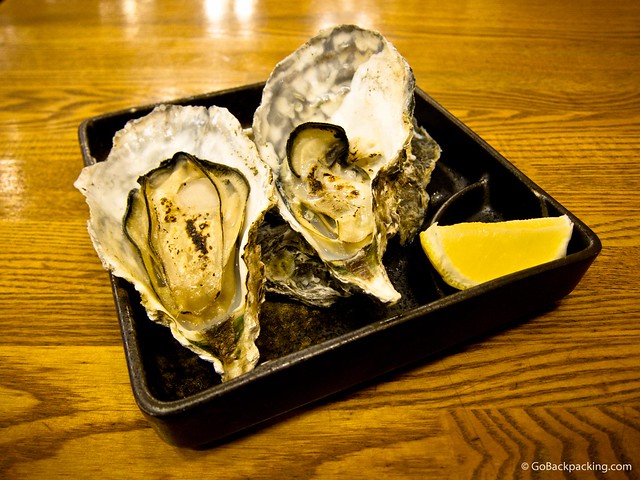 A pair of massive Hiroshima oysters

A few hours later, after lots of photos and reflection, I returned to the same restaurant to try the oysters, another popular Hiroshima delicacy.

I became a fan of oysters in Arcachon Bay, France, a few years ago, but the ones I had then were small enough to slide down my throat in a single gulp.

The Hiroshima oysters were gigantic…far too big to swallow without chewing first.

I hesitated, but then squeezed some lemon juice on one and scooped it off the shell with a fork.

Each oyster required several bites, and I was surprised to enjoy them despite the extra time they spent in my mouth (versus the smaller oysters you can easily swallow).

Hiroshima gets points for size, however fresh French oysters dripping with the saltwater win on flavor. 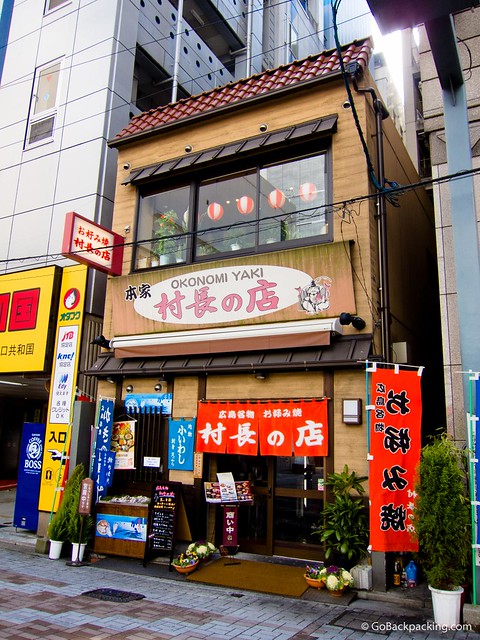 Exterior of the restaurant where I first tried okonomiyaki.

The okonomiyaki and oysters look delicious. And how cool that you can eat right off the griddle. Saves on dishes ;)

Did I mention it was massive? I only decided to finish it as a matter of pride after looking around at the others leaving no morsel left behind.