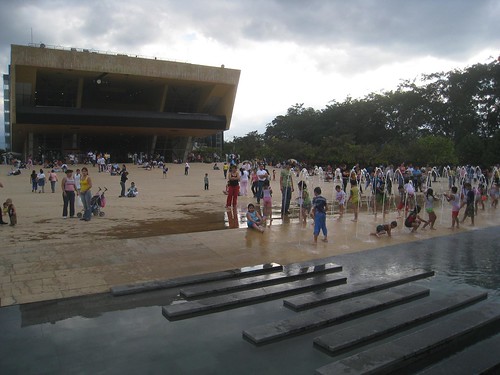 Andres, the Argentinian, and I continued to walk around the Universidad metro after visiting the aquarium. We spent a little time in the wide open, concrete Park of Wishes, which sits adjacent the city´s planetarium.  Kids were playing in the fountains and a large sand pit surrounded by shaded park benches.  During the weekends, such parks are clearly a popular place for families and kids. 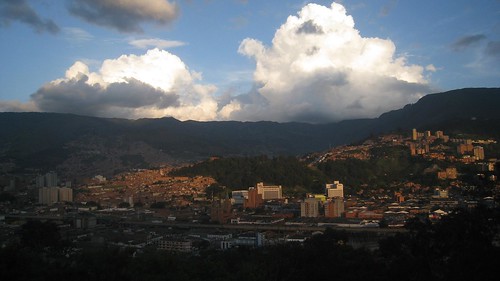 Just one of the many views of Medellin

We then managed to take a backwards way up Cerro Nutibara, a natural hill turned park, rising up from the middle of the valley and city. It offers 360-degree views of Medellin, and we just happened to time it so that the sun was setting over the western mountains, and the lights of the city were turning on. There is a well manicured grassy area for lounging around, and a mock Antioquian rural village called Pueblito Paisa. It includes a little church, chemist, and barber shop, among souvenir shops and a few restaurants. 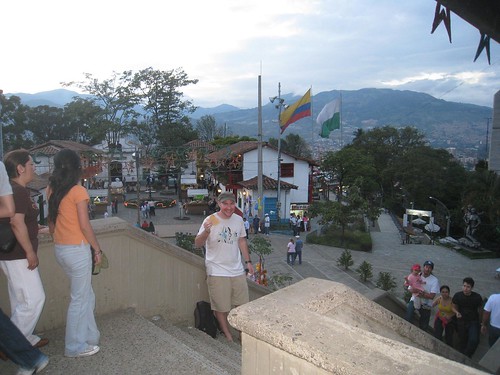 Eating an arrepa at Pueblito Paisa

I was hungry, and bought an arepa before I knew it was a staple of the Colombian diet. Street vendors sell them in all sorts of ways. The version I bought was two thin tortillas with cheese in the middle, and sweet condensed milk (I think) drizzled on top. Light and tasty, I took the opportunity to pose for a photo with the pueblito behind me. 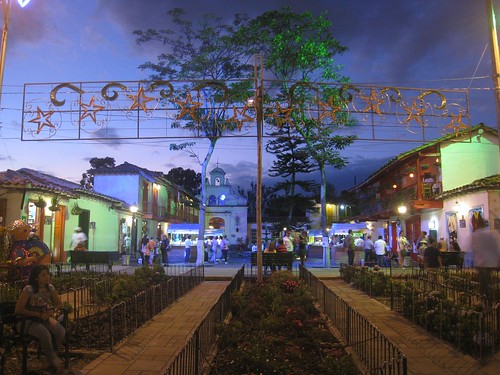 Music was playing, and there were mostly Colombians atop the hill. Andres and I took the time for a drink before heading back down to the city, where I opted to buy us a cab back to the hostel. Unlike Bogota, the taxi meters in Medellin reflect exactly what you pay. The cost is low by western standards, with most short trips costing about $2. A trip from one side of the city to the other might run $5. The cabs are all yellow, and easily identifiable, though the drivers usually don´t speak English. As in China, it helps to carry a piece of paper with the address of your destination to avoid confusion. 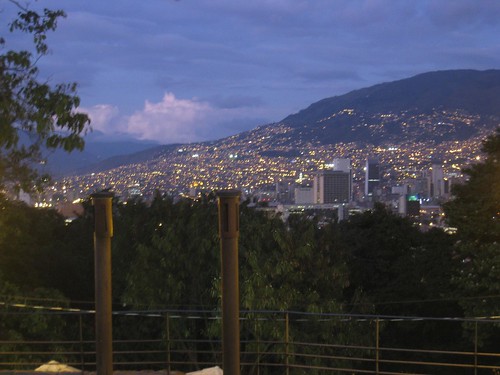