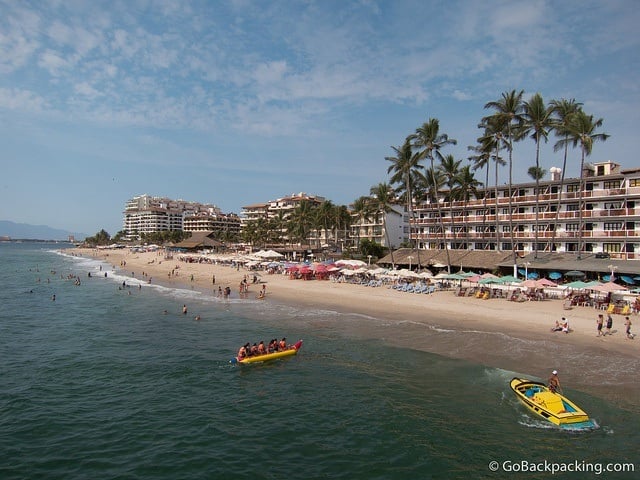 My first time in Mexico was as a kid. My parents took us on a family vacation to Club Med in Ixtapa, but I never left the resort.

Twenty-five years later, as an adult, I can't imagine going to Mexico and not taking the time to venture out and explore, yet the boom in all-inclusive resorts speaks to the popularity of the do-nothing vacation.

Travel Tip: In Mexico, as well as everywhere I travel, I always carry a credit card with a large limit and low fees in case of an emergency. You can compare credit cards to use for travel emergencies online.

I arrived in Puerto Vallarta after 12 hours, and a string of three flights from Medellin.

I was greeted by Christine and Drew Gilbert, their son Cole, and new daughter Stella.

There are few things I appreciate more than someone waiting to greet me at an airport, whether it's friends or family, or even the occasional tour guide holding my name up on a sign.

All the normal stresses associated with arriving in a strange and foreign city disappear.

We hopped in the minivan Drew drove down from the US, and drove to the local Mega supermarket, which was immense. Along the way, we passed Walmart and Sam's Club on the highway.

The US business influence was clear and present here, which is not something I'm used to living in Medellin.

After picking up groceries, we drove a bit further north on the highway, turned off onto a dirt road for a few blocks, and arrived at their house in Bucerias, a town thirty minutes north of Puerto Vallarta with far fewer beach resorts.

I knew from Drew's Instagram photos that they commonly saw donkeys and horses in the streets around their house, but it was another thing to see it with my own eyes.

The house is surrounded by walls and metal gates, which act as both protection from the outside, as well as a way to keep Cole and the dogs inside.

Built by an expat, it was colorfully painted, with large, flower-filled trees winding their way up the surrounding walls. 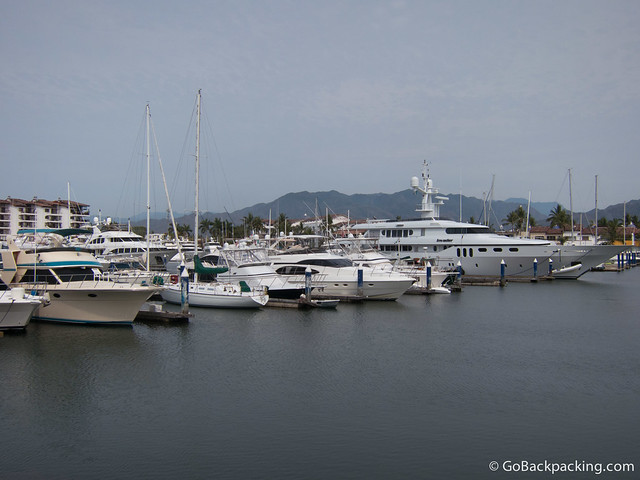 I quickly learned my priority was to give Cole attention, lots of it.

We played with his Matchbox cars, which reminded me of that phase in my childhood, and threw things in his little kiddie pool (his idea, not mine).

The first evening was spent eating guacamole, drinking Pacifico beers, and catching up on their outdoor patio.

The next day, Christine and Drew had a blogging workshop to teach, and thus, I had the day to myself.

I walked over to the beach in Bucerias for my first look at the Pacific Ocean since leaving Lima last August and then asked a taxi to take me to the Malecon (boardwalk).

Twenty minutes later, he dropped me off at the entrance to the Marina, which has a little boardwalk, but it wasn't the one I had in mind.

It was already early afternoon, and I was getting hungry, so I began walking around.

The entire harbor is surrounded by restaurants, which would make for a great happy hour and nightlife scene, only it was a ghost town.

April is the start of the low season. Temperatures in Puerto Vallarta start to rise, and as Christine told me, many of the expats leave Mexico to spend the Summer in another home, especially the Canadians.

I was quickly convinced to grab lunch at Sticky Fingers by a Mexican host who spoke perfect English and was disarmingly effective at his job of getting people in the door.

I ordered fish tacos. They were good, but dry. Another day, I'd get my hands on far juicier ones in Old Vallarta. But it didn't matter, not really.

I was in Mexico, sipping beer, overlooking a beautiful marina filled with yachts. This was the good life. 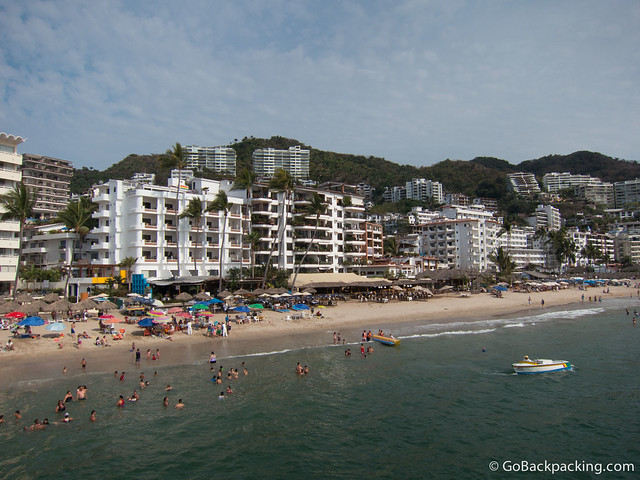 My next taxi took me all the way down to the Zona Romantica, an older area of Puerto Vallarta currently ranked the #1 Thing to Do on TripAdvisor.

There's not much to see, per se, but it's a terrific place to eat and drink.

The Malecon runs along the beach, and there's a giant steel pier which offers excellent views of the coastline.

As you can tell from the photos, the beach isn't wide, but it's undoubtedly scenic, with the mountains acting as a backdrop to the hotels. 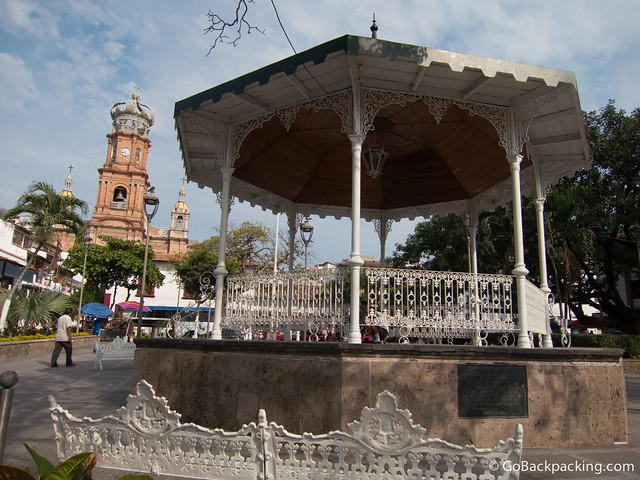 The center of Old Vallarta, with the Church of Our Lady of Guadalupe in the background

From the pier, I began to casually walk the length of the Malecon, shopping for a more stylish hat to replace the $3 Yankees cap I bought in a pinch weeks earlier.

It was in the center of Old Vallarta that I saw a sign explaining why you always see churches in the main plazas of Latin pueblos and cities (at least those established by the Spanish).

The planners were following a decree by King Phillip II in 1573, which stated symbols of political and religious power should face a central square. 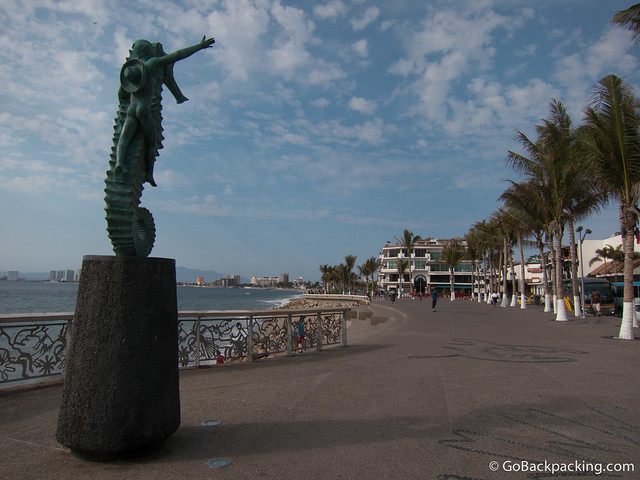 Statue along the Malecon (boardwalk)

The Malecon in Puerto Vallarta is clean and nicely designed.

Statues and local art dot the way, as do dozens of restaurants, bars, and shops.

I imagined the nightlife to be exciting, given the size and location of the discotecas right along the boardwalk, overlooking the sea.

Add to that a mix of vacationing Mexicans, and foreigners from around the world, and you're sure to see a lot of pretty people getting crazy off tequila shots and Margaritas every weekend. 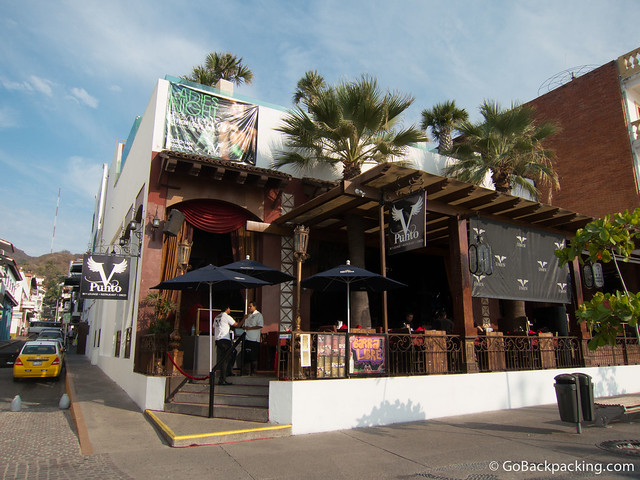 Typical bar on the Malecon

With Mexico on daylight savings time, I didn't have the patience or energy to wait for the sun to set.

I took another cab back to Bucerias to meet up with Christine and Drew. 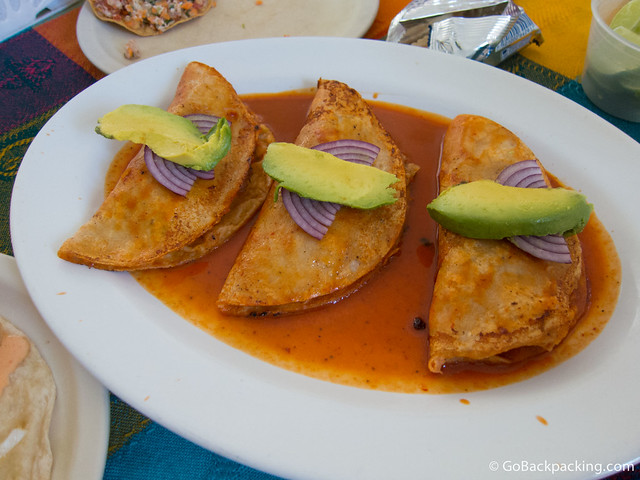 Instead of ordering individual entrees, we ordered a variety of appetizers to taste, including shrimp tostadas, soft crab tacos, shrimp empanadas, and mussels.

Everything was amazing, and cheap, which would become a recurring theme with the food I'd eat in Mexico.

Have you been to Puerto Vallarta? Share your thoughts in the Comments below.

This post was written by Dave and brought to you by Lloyds TSB.

Those crab tacos look unreal! I really enjoyed Puerto Vallarta and stuck around for a couple of weeks. It's like a little Mexican gay ghetto so it is perfect for gay travellers too.

I've never been but I definitely want to go :)