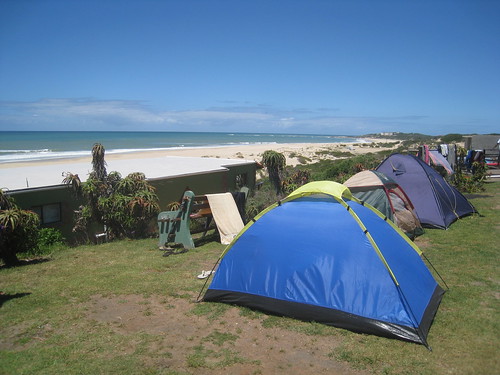 I arrived at Island Vibe in Jeffrey's Bay after dark, the sounds of crashing waves all around me. The scene was lively, and the setup much bigger than the sister backpackers in Knysna. I felt a bit out of place, ordering food from a local pizza place since I missed the communal dinner (and am not bothering to self-cater as many do).

My first morning brought plenty of sunshine, and wind. Sandboarding was on offer at several places since Cape Town, however I was holding off until J-Bay since I didn't intend to surf. John, the guy who handled guided excursions and shuttles for Island Vibe, transported me a short distance down the rode to the few large sand dunes yet to be developed into vacation homes. I picked up a sandboard and walked over to the first dune, referred to by the instructor as the Volkswagen.

Sandboarding is similar to snowboarding so the learning curve is far shorter if you've done the latter, though it's not required to have a good time. Before you can climb the dune for a ride, the board is waxed by using your hand to smother its base with floor polish. Then, you rub sand against it, leaving a surprisingly smooth surface. This process has to be repeated every 2-3 rides, making for a messier experience than I expected. As a result of the wax-on, wax-off cycle, and high winds, I only managed to take photos of the dune, and the water, before retiring my camera. 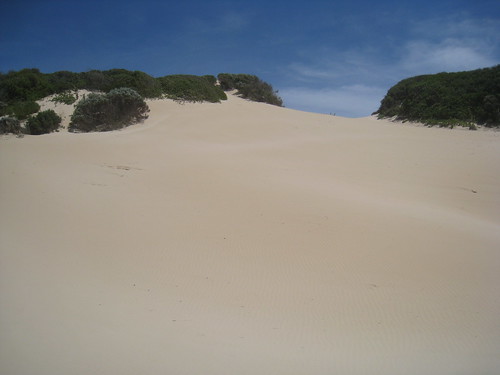 Speed is a much bigger factor in being able to turn on sand than snow, so the Volkswagen run was only good for going straight, which was not my natural tendency. I gave it a few tries, and then me and two German guys headed over to the dune our instructor dubbed Ferrari, mostly on account of the steep top third. Perhaps a lack of snowboarding in recent years gave me the energy to fit in as many runs as possible, given every quick trip down required a sandy climb up. I started to get the feel for it and found my favorite starting spot near the bushes at the upper end of the dune where the winds whipped up a steady supply of sand in my face.

The view from atop the big dune, before descending, was gorgeous. The water appeared as several shades of blue, and it felt like a world away from the development of town nearby.

awesome! i've never done either but this sounds like so fun

awesome! i've never done either but this sounds like so fun

Another amazing post Dave. What kind of outlandish food will you be dining on for Thanksgiving?!

Another amazing post Dave. What kind of outlandish food will you be dining on for Thanksgiving?!