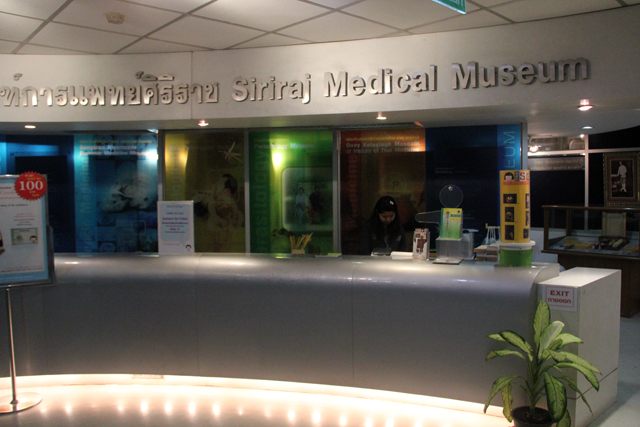 Skeletons, human deformations, and death from accidents sound interesting to you?

Among the many interesting things to do in Bangkok, is the Siriraj Medical Museum.

Siriraj is the most famous and one of the best hospitals in all of Bangkok; it's also a huge training hospital where medical professionals learn, watch, and gain experience.

Located within the hospital is the museum, which is not only used to train soon-to-be-doctors, but is also open to the public.

I'll admit, I wasn't too excited the first time I went – in fact I was a little nervous, not exactly wanting to be in a room surrounded by cadavers and gory human tentacles.

I pictured a dark damp room, like the movies, where human bodies would be showcased in frightening postures.

Finally, I built up enough confidence to go one day and experience exactly what it was all about.

It wasn't as freaky as I had imagined… though it was still a little on the scary side!

After paying an entrance fee of 40 Thai Baht you can then enter the museum.

Unlike the dark damp room I had imagined, it was well lit and nicely air conditioned – without any smells of death.

The first exhibition I walked through was an overview of the disastrous tsunami that occurred in the south of Thailand in 2004.

The displays showed pictures and there was even a video of the injuries that came about as a result of the catastrophe.

I continued to browse through a number of galleries, some that showcased infant deformations and injuries.

Though still sad and disturbing, the cadavers were preserved in glass-encased containers filled with liquid solution, making the exhibits more comfortable to view.

Some of the infants had passed away while they were still in the womb, tiny fetuses and embryos. 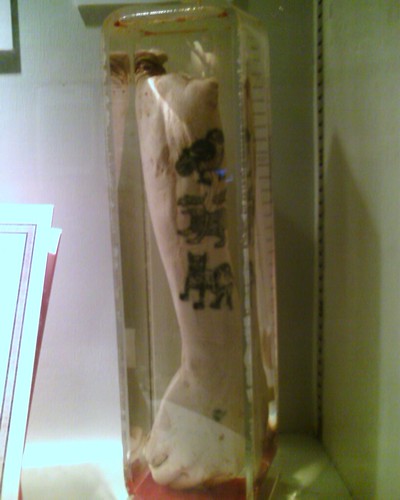 Check out this arm! (photo by vmos)

The main human anatomy room in the back of the museum is where things got a little creepier.

It's in this room where you'll find all sorts of ancient and creaky wooden cabinets and glass containers filled with all sorts of interesting body parts, entire bodies, and bones.

While it was amazing to look at a real cross section of a human head, it was also a little scary to look at it for too long (at least for me).

There was also an entire body that was shriveled and dried so you could see the muscles.

Another huge section of the museum was the bones section. This area was the most non-queasy section for me to browse through, and it was very interesting to see the different bones.

Along with many of the bones were detailed descriptions about the injuries they had sustained. Some of the head injuries weren't very pretty.

About 30 minutes in Bangkok's medical museum and I had seen just about all I wanted to see and headed out.

Though it wasn't as cheery as visiting a museum like the three-headed elephant, it was a very educational and worthwhile experience.

If you would like to check out one of Bangkok's lesser-visited museums, and if you're alright with seeing human anatomy up close and personal, you'll really enjoy the Siriraj Medical Museum.

Very weird, but cool at the same time!

Very cool...I would love to go there! It's like a mini medical school for the non doctors. I find the human body so fascinating. Glad to hear that it is tastefully done. Not sure if I could handle the fetus from the tsunami though - somehow, it is one thing to look at body parts in the name of science, but when it is from a real tragedy - somehow I have more trouble with that!

I missed the medical museum, but last year I had the chance to visit the penis museum in Reykjavik. An interesting way to spend an hour of my life, for sure.

I went to the Medical Museum a couple of years ago. It was an interesting place for sure!