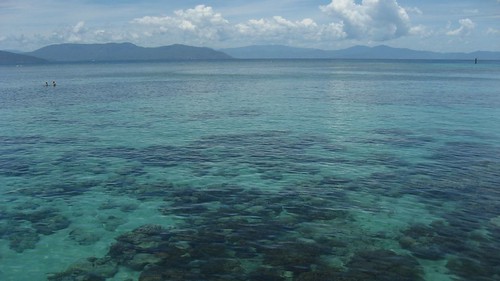 After saying goodbye to Michael and Ann in Trinity Beach, I was picked up by a shuttle for my 1/2 day snorkeling excursion on the Great Barrier Reef. Michael had suggested Green Island would offer the best conditions based on the prevailing winds so I went with it.

The ride out to the island was about 30 minutes aboard a big catamaran that felt less stable than the Apollo yacht. I hired (ie. rented) a blue, full-bodied stinger suit. Jellyfish weren't tauted as a big threat, however a nasty sunburn would be awaiting me if I didn't take precautions.

My boat arrived earlier than the big (full day) one, so I jumped right into the water left of the pier after suiting up. Actually, I had to pay to lock up my valuables first, and as I had my main backpack with me which was too big for the lockers, I covered it in my towel so it was clearly visible from the water.

The water was very clear, and I saw heaps (that's how Australian's like to say “lots”) of coral and fish (big and small). I had trouble with the mask fitting properly, though eventually realized it was because I had the hood of my stinger suit over my ears. A small adjustment remedied the problem although the “free” equipment was clearly cheap stuff.

Two hours on the island gave me just enough time to spend an hour and a half in the water. As we sped back to the mainland I couldn't help but think I shortchanged myself in this great environment.