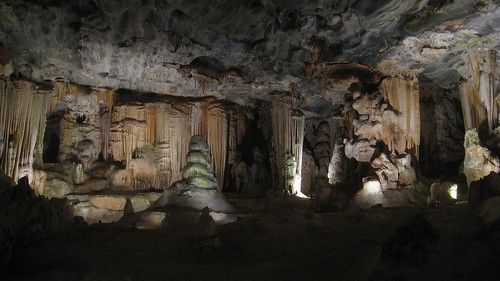 I booked tour ” C”? through the hostel which consisted of transport to the Cango Caves and an ostrich show farm, leaving me with a mountain bike ride of 12 kilometers back to town, along the way passing a wilderness park where I would get up close and personal with a few  cheetahs.

Lonely Planet describes the caves as commercialized, and I saw what they meant once the tour began.  We were not given headlamps or helmets, and all the pathways were smoothed by concrete and lit by ankle-level lights.  Still, me and my four companions (2 Irish lasses and 2 Dutch girls), hoped for a little extra excitement by choosing the longer ” adventure”? tour. 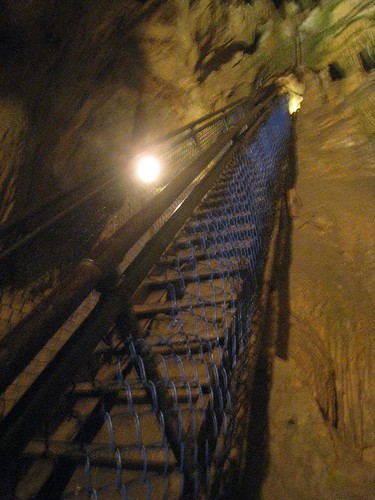 As we got deeper into the caves, the spaces started to narrow.  The most difficult maneuvers were so tight, we had left our cameras behind.  The Devil's Chimney was a 3.6 meter upward crawl in a chimney-like feature with an average diameter of 90 centimeters.  In other words, it was damn tight.  All the ladies went first, and I sighed in relief each time our guide-in-training, Shane, confirmed another got through OK.  It was the tightest and longest space I'd navigated in my sparse experience as a spelunker.  I slithered on my stomach at a quick pace, hoping the speed would ensure I did not get stuck.  The surface against my stomach was smooth, so I didn't hit any snags.  Once through, the four of us were in a small chamber, with the only exit being the Letterbox, a 5 meter crawl with a 60 centimeter roof to floor clearance.  Again, I was on my stomach hoping not to get stuck.  The girls all made it through first, and I made haste in catching up to them all.  It was a short-lived adventure, yet it did register a bit on the adrenaline meter for those few seconds you are encased in tons of rock!

The town of Oudtshoorn is situated in the valley between the mountain ranges of the Outeniqua and the Swartberg eithin the Klein Karoo region of South Africa.It is probably one of the most diverse in terms of its extra-ordinary mixture of nature and heritage as well as the fact that it has the world's biggest population of commercially farmed ostriches.

I booked it as part of a little package from the hostel in Outdshorn.

I booked it as part of a little package from the hostel in Outdshorn.

Could you give me the website you used to book this?

Could you give me the website you used to book this?