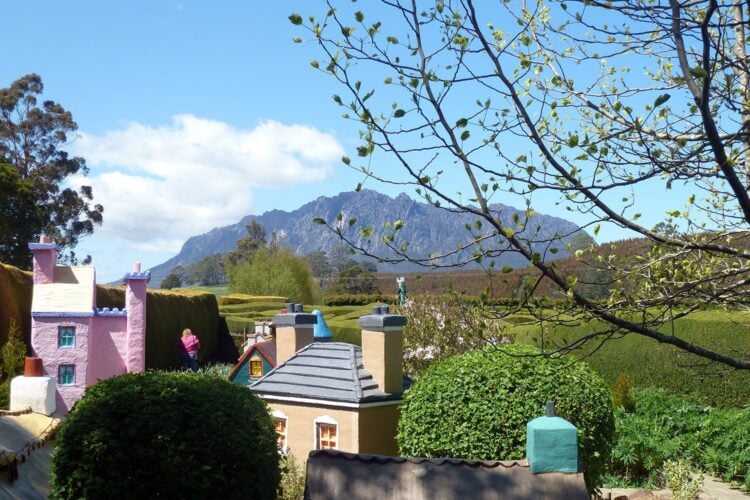 The town of Lower Crackpot

Australia. It's a big country. There's so much to see and do, it's hard to narrow down what does and doesn't deserve your attention.

When people ask me for advice, I usually rattle off a long list of places to eat and drink in Sydney, tell them they have to go to Melbourne, and insist that they make time for Tasmania.

Australia's most southern state is often neglected, and I don't understand why. 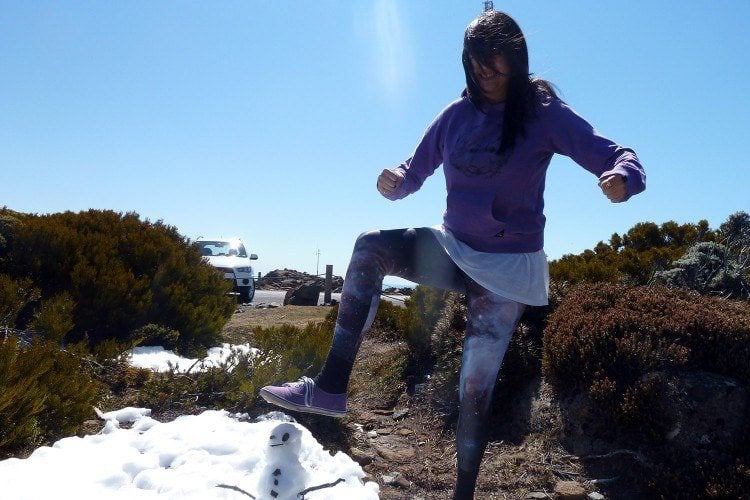 Wind in my face and snow! In October!

It's not as stinking hot as the rest of Australia

What images are synonymous with Australia? Sizzling hot sun and lithe bronzed bodies, jumping from sand to surf?

You're not going to get much of that here.

Tasmania is notoriously chilly. While the rest of the country spends summer baking in 90+ degree heat, T-mania tends to sit comfortably around the 70s.

Winter can be icy cold and often brings snow – which can last well into what is considered “beach weather” in other parts of the country.

I discovered this when I visited in the middle of spring back in 2011.

A snow-capped Mt. Wellington towered over the state's capital of Hobart. I'd been sun-baking in my hometown of Sydney only days earlier.

Tasmania is a separate entity to the rest of Australia

There have been a lot of moments throughout history where the rest of the country has neglected T-mania.

Take the 1982 Commonwealth Games, where performers used colored cards to put together a map of Australia – which was missing our island state.

Thirty-two years later, they were further offended when they were left off the uniforms for the 2014 games.

There have been multiple slip-ups throughout history, which has bred much discontent throughout the state.

Residents of other parts of Australia are referred to as “mainlanders” – sometimes in jest, other times with darker undercurrents to their tones.

Either way, mainland Australia hasn't done their bit to help Tasmania feel included, and traveling there can often feel like journeying to an entirely different country. 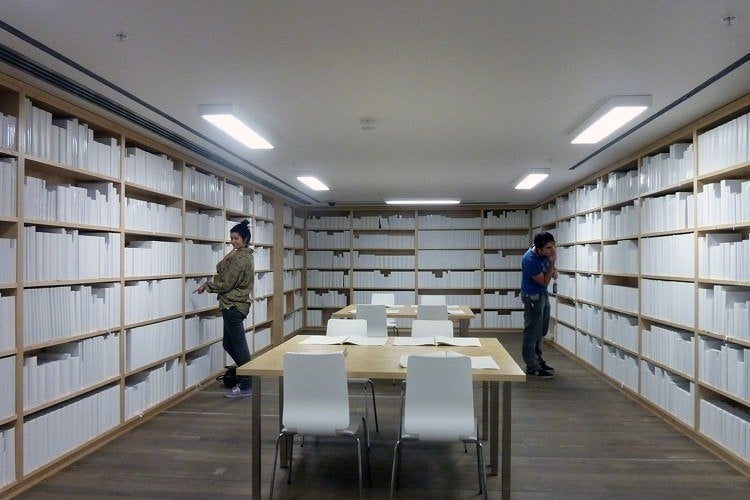 An exhibit inside MONA

The Museum of Old and New Art was opened in 2011 by David Walsh – a Tasmanian, who made a fortune from professional gambling.

He used his wealth to invest in a substantial collection of art, opening it to the public in the form of this museum.

MONA provided a chance for residents and tourists to take in Walsh's eclectic collection.

The museum has fast become one of Hobart's most popular attractions.

In a nod to Walsh's origins, residents of Tasmania receive free entry into the gallery.

It's perhaps the only Australian state with a castle

I had to do a double-take when driving through Perth (not to be confused with Western Australia's capital), on my way from Hobart to Launceston.

“Did we just pass a castle?” I asked my then-boyfriend. He nodded in confirmation.

It turns out someone wanted to build a castle – so they did. Complete with a guardian knight and windmill.

Everyone knows where the castle in Perth is and seems continuously amused by it. 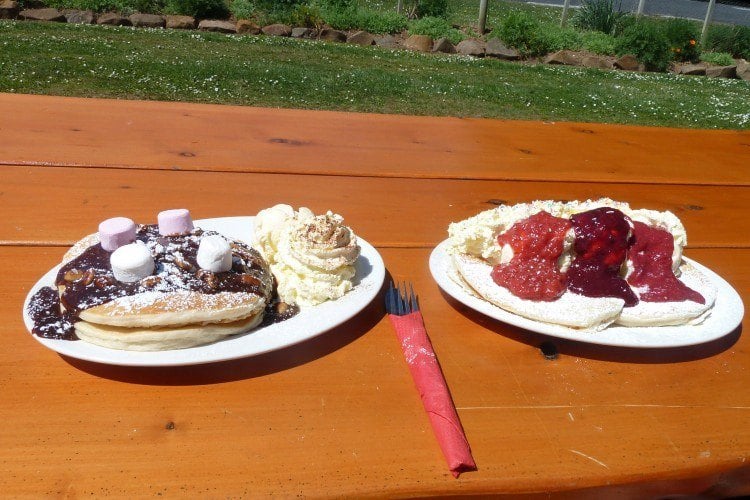 It boasts the biggest maze in the Southern Hemisphere

Tasmania is home to Tasmazia – the largest hedge maze in not only the country but the southern hemisphere.

The maze is so big that it has its postcode. Any mail sent from there will be delivered under the name of “Lower Crackpot,” after a model village that lies within the center.

Even better – smack bang next to the maze is a pancake shop, which has what will probably be the best pancakes you'll ever eat in your life.

Tasmazia is over an hour's drive from the town of Launceston, but it's well worth the trip.

On a more somber note, Tasmania is home to Port Arthur.

The area was once a former prison and convict settlement but is now regarded as Tasmania's most significant historical site for much darker reasons.

On the 28th of April in 1996, a young man from Hobart drove to Port Arthur, armed with three high-powered firearms.

He proceeded to tour around the area on a killing spree, which killed 35 people and wounded 23 others.

He was eventually apprehended and is currently serving out 35 life sentences in jail.

The massacre shocked the nation and led to a federal restriction on high-capacity semi-automatic shotguns and rifles.

As one of the country's best known historical sites, it receives over 250,000 visitors each year. 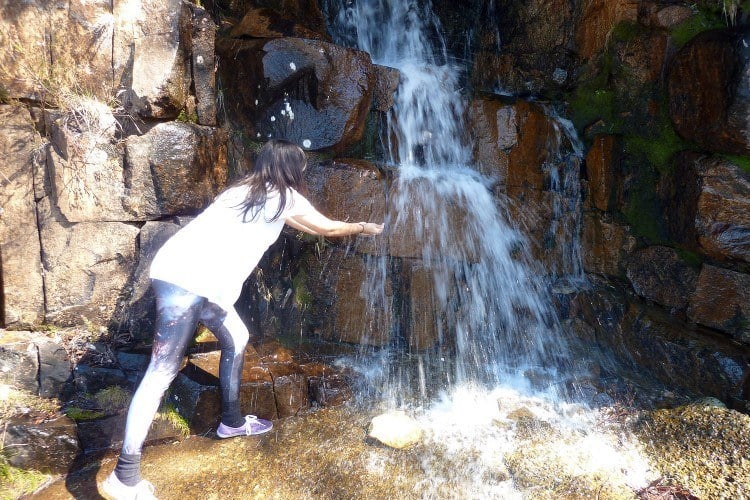 A large amount of the state is a World Heritage Site

Australia is a beautiful country, but Tasmania perhaps takes the cake.

The Tasmanian Wilderness World Heritage Area covers 15,800 km² (20% of the state), making it one of the largest conservation areas in the country.

It remains a popular area for bushwalking and quiet contemplation.

The area has been threatened repeatedly over time.

In 2014, the Australian government proposed de-listing the Tasmanian Wilderness as a World Heritage Site, to allow logging of trees in the protected area.

The proposal was rejected by the 38th Session of the World Heritage Committee in June 2014.

For now, the area is safe, open to enjoyment from residents and visitors alike.

There is a place called “Eggs and Bacon Bay”

This is self-evident. It must be visited.

So, if you like art, culture, history, fresh air, and breathtakingly beautiful countryside, you should probably take a trip to Tasmania.

You won't regret it.

That last comment about the bucket list... my wife and my "Obscurity bucket list" really needs to be revamped to include places we've heard about and still not visited, without any sort of good excuse whatsoever. My wife however, thinks that would ruin what makes this list so special in the first place, because if we have heard of it, it's no longer obscure. Maybe we need to make two lists!

I'm still daydreaming from those pancake pictures, here in South Africa ours are more like crepes and usually filled with curry mince or some other sort of meat (chicken livers also) and less a dessert than a meal.

I want to go to Tasmania now, I'll work on the missus. :)

South African pancakes sound equally as delicious, however I can't say I regret ordering and consuming the rocky road pancakes I got that day. Nothing much has matched them since!

I hope you achieve success in convincing your wife to go!

Tasmania is on the top of our bucket list! But it is so far away from Europe, our homeland... Thanks for this post, it was very inspirational. I had no idea that Tasmania is colder than the rest of Australia :)

I'm glad you enjoyed the post, Patryk. I rue the distance between Europe and Australia constantly myself. I say this with so much bias, but anywhere in Oz is really worth the trip.