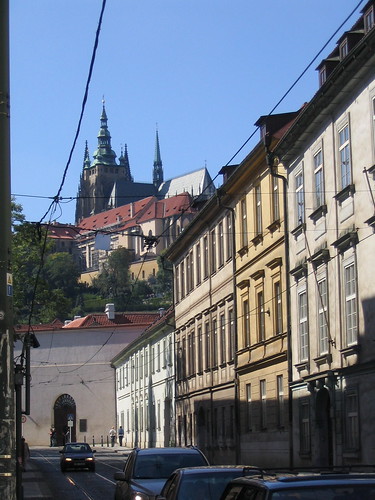 When glancing through the makeshift syllabus on the first day of my TEFL certification course, I distinctly remember one title catching my attention.  “1-2-1: Teaching Individuals.”

I wasn't sure whether to laugh or grimace at the nineties-era number speak.  The abundance of flannel and male ponytails often made Prague feel firmly rooted in 1995, perhaps proudly hanging onto the country's first decade of self-governing freedom.  So, abbreviating ” to”? with ” 2,”? while cringe-inducing, was probably appropriate.

My course instructor informed us that one-to-one courses are some of the most common in the European ESL market, not only because they can build a teacher's repertoire (and income) with private lessons, but also due to their usefulness to the student.  This variety of lesson is a student's best opportunity to practice.

I walked into my first individual lesson exactly as any overprepared, spontaneity-fearing person would: with a perfectly timed lesson plan.  Opening the door of the business at which I was teaching, I climbed four flights of stairs to the attic office, where I would spend the next ninety minutes alone with a government customs officer three times my age.

Yeah, he probably wasn't interested in filling in the blank with a noun or a verb.

Likewise, neither was the twenty-five year old secretary whose broken sentences detailed the questionable substances her boyfriend had stashed under their mattress.  The near-fluent newlywed whose wife was about to give birth to their first child?  Same.

Therapist and gossiper wasn't part of my “1-2-1” education, but in chatting about my students' lives, I realized most of them wanted to do one thing: speak.  Maybe they confided secrets in me because speaking a foreign language felt as though they weren't revealing them at all.  Maybe they looked to our hour together as an escape from the stress of work.  Maybe they were simply taking advantage of an awkward twenty-two year old.

Whatever the reason, I found justification for ditching the lesson plans for long chats and spur of the moment grammatical corrections.  My individual students got to practice for the real world.  We could hold discussions as they might with business colleagues, or we could gush the way they would over a beer with a friend.  We didn't speak English for a grade, we spoke it for reality.

Sure, ninety minutes is a long time to listen to a single person talk, and I'd be lying if I didn't admit to dreading a select few each week.  But these lessons were an opportunity to craft a course that my students would truly remember, because for once, we did what they wanted.  Even if TEFL is only a means to an expatriate adventure, we are still teachers, and it never hurts to make an impact along the way.