This is a guest post by Stephen Barrett. If you want to guest post on Go Backpacking, please read more here.

As part of a larger backpacking trip around the world, Stephen Barrett had the good fortune to be in McLeod Ganj, seat of the Tibetan Government in Exile, for the first day of a series of lectures given at his residence by Tenzin Gyatzo, His Holiness the 14th Dalai Lama. 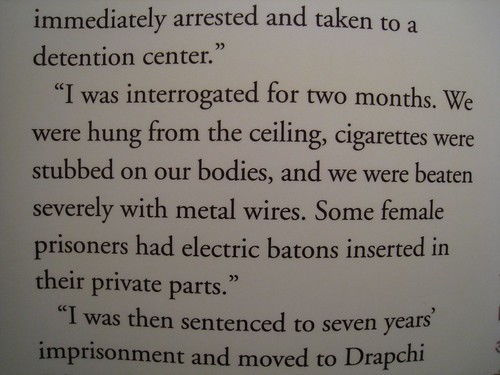 I wander into the small museum close by within the complex. Within this small space the museum successfully tells the story of Tibet's interwoven spiritual and political history and the current Dalai Lama's selection at the age of two under the direction of his predecessor who took instruction from his dreams. It goes on to illustrate Chinese occupation and the subsequent plight of so many people.

Photographs, videos and detailed descriptions bring this hidden history to the fore and the effect is powerful. First hand accounts of seemingly impossible journeys fill the air and only then can I begin to understand those damaged people outside. It is a profound experience.

The main hall within the Tsuglagkhang Temple complex is large and airy with gold colored prayer wheels on the inner walls. Groups of monks and lay people from all corners of the world mill around talking excitedly, scoping out positions and choosing a floor space to seat themselves. Many have brought cushions to sit on and carry bowls or cups, the use of which is yet to become apparent. 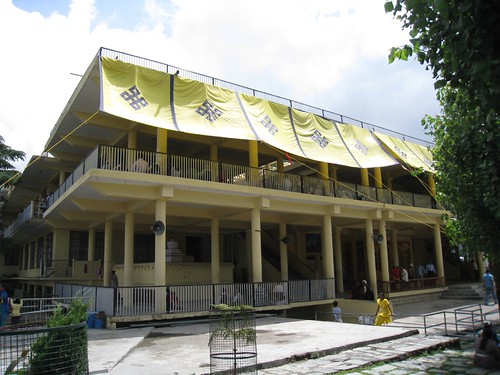 To the front an enclosed area with space for maybe two hundred devotees houses a raised wooden stage with a simple white seat decorated with multicolored and gold inlaid covers. Behind it sits a large golden Buddha. Large windows and wide doors mean there is no problem for the rest of us to observe what is to take place. Immediately outside this enclosure sit five rows of monks.

I manage to find a space in the sixth row among the first of the lay people. I settle in to sample the atmosphere and regret my lack of a cushion as I got used to the hard ground. Teenage boys, shaven headed and barefoot skilfully weave through the seated crowd carrying large kettles filling the cups and bowls with sweet, milky tea. I am spotted and a plastic cup is produced from beneath a robe just for me. The atmosphere is alive with anticipation and it is obvious that this is an honor for many of the monks too, not just us lucky visitors.

Soon every inch of floor space is taken, leaving just enough space for people to pass single file around the outer hall. Latecomers quietly scurry in and apologize to their neighbors. Many, including me, produce small radios and earphones and tune in to listen to the simultaneous translation. It is at this moment that the screen on my digital MP3 Player/FM Radio decides to freeze and I am left dumbfounded. I am going to miss the whole point of the gathering. I study the player, fiddle with the buttons and scan the crowd above the heads of the monks for anyone who looks vaguely “˜techie', all to no avail.

The Dalai Lama is entering and the people stand as he passes. He is smiling and polite, shaking hands and bestowing blessings as he makes his way to the platform. It is all about to happen and I am not going to understand a word. Just then a young female monk or Bikkhuni taps me on the shoulder and takes the player from my hands, she pulls a pin from the hem of her robe and carefully inserts it into a tiny hole on the side of the player marked “˜Reset', a hole I had never noticed. The player obeys her and reawakens. She smiles at my look of gratitude and surprise before returning her gaze to the platform. I am saved!

To my shame I often forget that despite their other worldly appearances these are regular people just as involved and abreast of the modern world as you or I, often more so. Within Buddhism, Monkhood is not necessarily a permanent state, it is something that can be entered into and left at different stages in life, depending on the individuals own path. 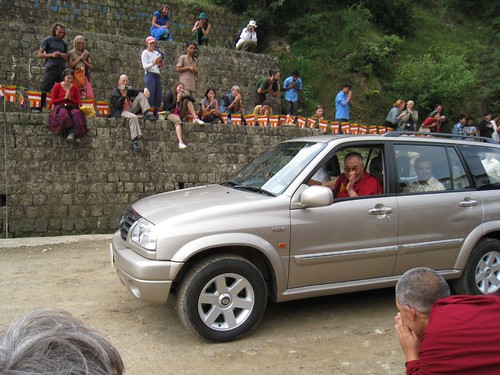 His Holiness the Dalai Lama after a teaching

His Holiness takes his seat. He wears the same maroon and yellow robes as the other monks, right arm free to elaborate his speech, left arm concealed beneath the robe. He begins by answering a few questions in English. His demeanor is open and relaxed. His voice is deep, warm and authoritative. With eyes fixed attentively on each questioner in turn it is clear that when you speak you are important to him and there is a promise there that he will give his best in his response.

In the course of answering the questions he touches on a meeting with Chairman Mao in 1954 in which the Chairman endorsed the use of the Tibetan flag, tells a humorous tale of pulling his fathers mustache as a child and instructs a mother on raising her son with compassion, patience and clear explanations. The serious question of whether a student should have blind faith in a master is raised. This brings an eloquent explanation that contrasts sharply with the dogmatic teachings of many religious leaders.

The Dalai Lama instructs his students to question their masters in the light of their own experiments, investigation and reason, and only then, if they are satisfied, should they accept the teaching. Faith and devotion to a master should not be allowed to color an individual's judgment. He goes on to explain that the Buddha himself said that oneself is one's master, Buddha is not the creator, merely a teacher, so you alone are responsible for satisfying yourself. It is a graceful and, to my mind, irrefutable response.

Without a pause for thought the answer begins to flow back to the questioner. The Dalai Lama responds by first defining the self as pure conscience. If we take this definition, he elaborates, then it is possible to argue that there is no end because there is no “˜counterforce' to pure conscience, therefore no reason for it to end. Things made of mere matter are destroyed by counterforces, their opposites. Impurity in the mind can be destroyed by meditation and right thinking. What is left is purity. A true buddha's mind is a pure one with no reason to end so the essence remains.

He goes on to cite as evidence, children with very clear memories of previous existence but he also leaves room for further debate by stating that there are many views on the subject from various religions. His final words on the subject, as you would expect, reflect an open and inquisitive mind; ” Which is right? We must investigate.”? 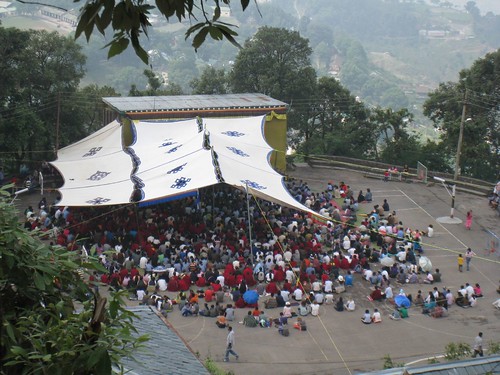 Tibetans, monks, and lay people listen to a teaching by his Holiness

Switching to Tibetan now, he addresses the text he is to discuss this afternoon. As this happens a quiet whisper begins in my ear. His faithful translator, sitting attentively to one side, is discretely whispering in English probably for half the people present or more, as well as all those gathered in cafes, hostels and classrooms across the town.

The Dalai Lama is addressing us on the text of Je Tsongkhapa's Song of the Stages for the Path to Enlightenment, someone and something I have never heard of. His discourse is all about clarity and removing “˜obscurations' in order to obtain a correct view of reality. Throughout his discourse the emphasis is on the ability of everyone to do this. No man, not he or the Buddha himself has an innate advantage in this area. Everyone must learn and develop to improve their mind.

The feeling of equality is the wonderful thing about attending a lecture such as this, given by someone who has clearly devoted a lifetime of study to the subject. There is no condescension, no inflated ego, no political grandstanding. Although he is held in the greatest awe by everyone in the room he never gives the impression that this is relevant to him. The feeling he has created in the room is that we are all equal and he just happens to be the one speaking today. Everyone is engaged, thoughtful and, to a greater or lesser extent, enlightened. 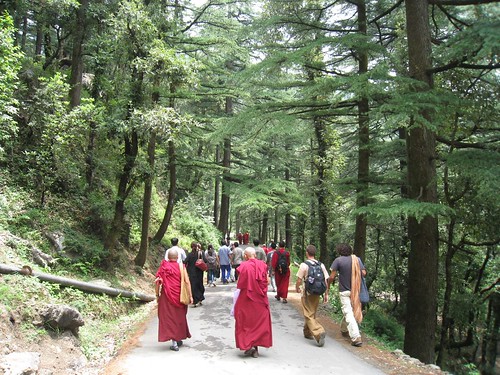 Two hours later, we disperse and I come away feeling a little lighter. It's like the physical feeling you have after vigorous exercise, but transposed to the brain. The walk back up the hill crackles with debate and discussion. Everyone has a view they are keen to share.

As the sun starts to slip behind the mist veiled mountains and the air take on its evening chill the people disperse to gather in homes, gompas, tearooms and cafes. The strings of their conversations will lengthen with the shadows long into the coming night.

About the Author: Stephen travelled the world in 08 and 09 and actually made a few dollars with a few little tricks along the way.

Photo Credit: All photos of India by David Lee

Howdy right now there, I can?t entry the site properly within Opera, I really hope you are going to repair this!

Neat blog layout! Very easy on the eyes.. i like the colors you picked out

Wow, I'm left speechless!!! What an extraordinary and once-in-a-lifetime experience this was!!! I'm so happy that your radio was fixed. I was a Comparative Religious Studies major in Uni (with an emphasis on the Asian religions), so this stuff fascinates the heck out of me.

I LOVE the pic of the DL waving from the car! :)