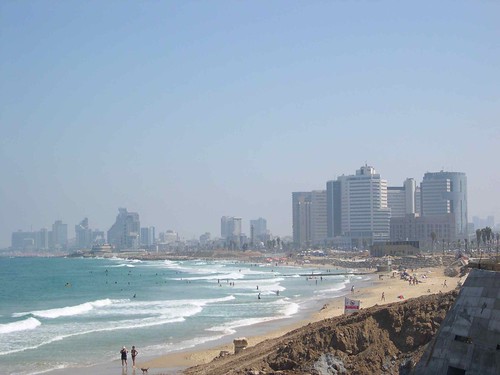 The following is a guest post by Melissa Davis.

Tel Aviv is the biggest city and trade center in Israel, situated along the coast of the Mediterranean Sea and with fantastic views and beautiful surroundings.

The city offers a diverse array of shopping locations, an active nightlife, cuisine from all over the world, entertainment venues, and lively trade fairs.

It is also the most important cultural center in the country, with a wide variety of galleries, concert venues, theaters, and museums.

While Tel Aviv is a magical and truly international city, there are some things to keep in mind.

First, the airport security check can be long and tedious.

If you happen to fly with the Israeli El Al, you should know that it is among the few airlines with armed security guards.

My innocent self was asked a few thousand questions before the flight: ‘What do you do for a living?’ ‘I see, a translator – what was the last translation you did?’, ‘Who used your laptop the last time?’ And it goes for ages.

Then, if you are an eager tourist, wishing to see it all from the beginning, don’t plan your holiday the way I did.

Landing just before Shabbat, I hardly managed to catch the last train from the airport to the city center (merkaz).

Everything was closed down apart from the big food stores, some restaurants, and a handful of museums.

If you come on Shabbat in the summer, you can spend the day on some of the beaches close to the Ben Yehuda Blvd.

For a unique cultural experience, go to one of the information offices around the city and get the contact details of a family, with whom to spend the holiday.

The downside of Shabbat is that you will be kept up by the festivities on the night of the holiday – celebrations usually continue all night long. This can be a problem, especially if your hotel is in the downtown area.

Many budget travelers (like me) opt for hostels found there.

The place where I booked was clean, packed up, and affordable, with staff fluent in about five languages.

If you absolutely insist on having an air conditioned room (and yes, humidity is a problem), you might look at other types of accommodation.

However, keep in mind that good hotels can be a bit pricy. Rooms start at $100 a night, especially during the holiday season.

Another thing to know is that the municipality there organizes free walking tours for visitors to the city.

These are in English and last for about two hours.

I joined a tour featuring the numerous examples of Bauhaus architecture – many of the buildings are considered monuments.

The city permits the construction of skyscrapers in the downtown area only on the condition that the constructor renovates older buildings.

In fact, real estate is quite expensive in the city. Apartments in high-rises on the coast are on sale for 14 million US dollars or so. 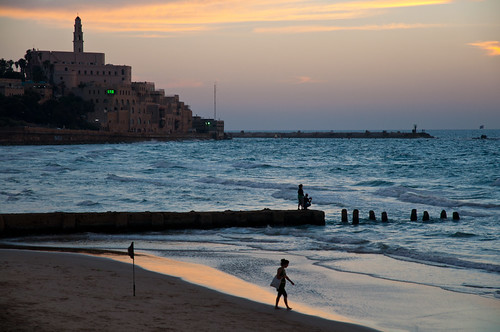 A Sunset in the Old Jaffa. (Photo: Stefano Mazzone)

Jaffa is among the prime attractions in Tel Aviv, and locals relish telling the legends of this place.

It was named after Japhet, son of Noah, who built the port after the Flood.

It is also believed that the name comes from Yofi, the Hebrew word for beauty.

The history of Jaffa goes back more than four millennia, with Jaffa being the only port in history that has been inhabited continuously since its founding.

Jonah left from Jaffa in his escape from God.

The Apostle Peter performed a miracle here. Then, Jaffa was conquered by Roman emperors, Richard the Lionheart, and Napoleon over the course of time.

Even without knowing all this, there is a special feeling one gets when standing on the shore and gazing out over the waters, flowing into eternity.

For me, Tel Aviv is a little like the two-faced god of antiquity Janus, with one face looking forward and the other gazing back into the past.

Tel Aviv may be a bastion of modernity in some regards, with the ancient city of Old Jaffa offering a charming touch of the medieval.

This unique combination of Mediterranean ambiance, modern outlook, and holiday resort is behind the special appeal of Tel Aviv.

As always, there are conflicts between tradition and modernity.

As far as Shabbat is concerned, they involve hotel policies. Religious tourists are usually asked to vacate their rooms in the afternoon, which is quite a bit before the end of the holiday.

You normally have to pay a higher price to stay or cancel your vacation altogether.

Recently, there were complaints about this, and the local rabbinate was asked to intervene.

That notwithstanding, such conflicts are inevitable in a city like Tel Aviv, where past and future live side by side.

About the Author: Melissa Davis writes for Healthy Living Magazine, offering advice on a balanced life, self-knowledge, and unforgettable journeys inside oneself and around the world.

Tel Aviv is a beautiful, fascinating city. One of the most important things I think any visitor to Israel should be aware of, though, is the Israeli-Palestinian conflict. There are many organizations which offer English-language tours to the West Bank, many of them straight from Tel Aviv.

You can also attend lectures, seminars & street rallies so you can speak to people in the city who are familiar with the actual facts on the ground and are involved with the conflict every year, every month, every day.

I could go on and on about Tel Aviv, though. Be sure to eat falafel there, too! I like the description of Tel Aviv as Janus, one face forward, one backward. The streets of Tel Aviv are modern and old/grungy at once. It's completely unique.

And it makes me go back again and again. Many people worry about security issues; yet, Tel Aviv is a very safe place to visit! I didn't bother locking my hotel room, and most other visitors didn't either. And the beaches are just fabulous - you can go swimming at 10 p.m. and the sea water is like tea...