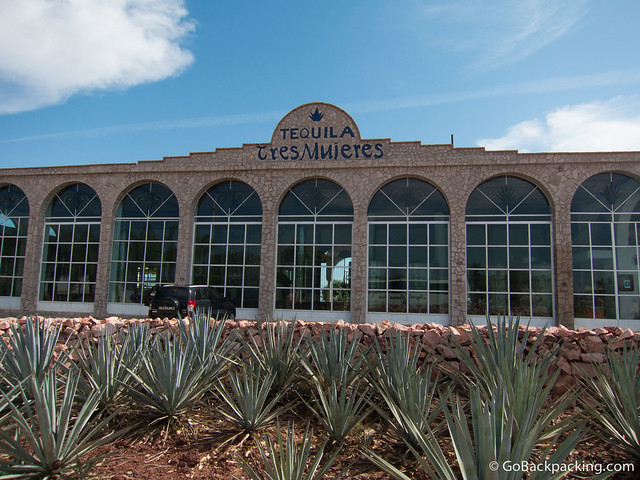 [I] dedicated my one full day in Guadalajara to a tequila tour through the agave landscape of Jalisco, which is designated as a UNESCO World Heritage Site.

I'd already seen fields of blue agave plants on the bus ride from Puerto Vallarta, but it was worth the time to learn more about the process of how agave is turned into tequila.

I don't like tequila, at all, but I wanted to seize this unique opportunity.

The small tour group was a mix of Mexicans and foreigners. Our first stop was Tres Mujeres, an organic distillery one hour west of Guadalajara.

There, we received a full tour and tasting, which was the highlight of the day. 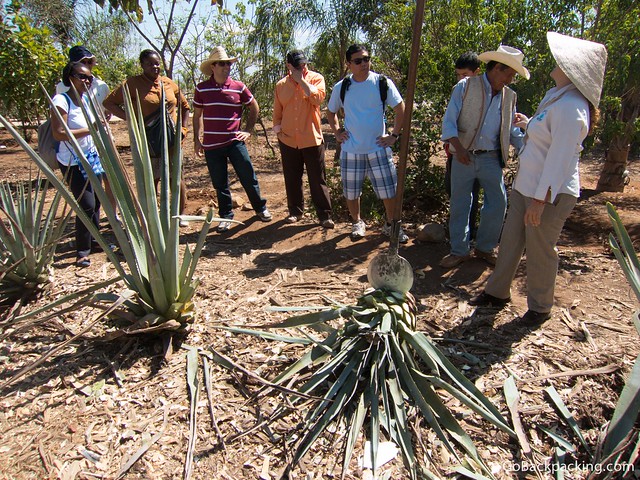 New agave is planted every May, before the start of the rainy season. It then takes seven to eight years before the plants are mature enough to be harvested.

Unlike planting the new agave, the harvesting can be done at any time of year.

The older man who demonstrated the proper technique for cutting off the leaves of the “pineapple,” or core of the plant for us, had been working the agave fields for decades.

Due to age, he was now working at a slower pace, and was only able to harvest about three tons per day, which still sounds incredible given the heat.

If I heard correctly, a single pineapple can weigh upwards of 200 pounds.

Every 15 pounds of agave produces one liter of tequila. 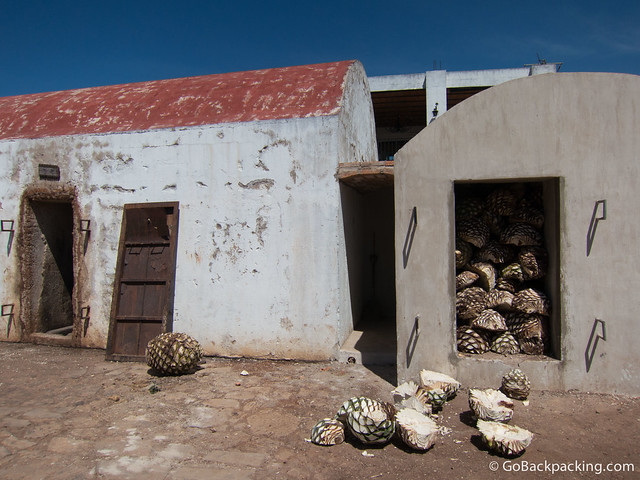 The “pineapples” are placed in the ovens for two days

Once harvested, the pineapples are placed in ovens for up to two days, and then given an extra day to cool.

At Tres Mujeres, they don't use any machinery. All of the work is done by hand.

From here, the distillation process is reminiscent of wineries.

The pineapples are squeezed of their juices, which then goes into fermentation tanks for four to nine days. They rely on the natural, organic process of sugar converting to alcohol.

A second distillation occurs to separate and remove poisonous methanol, while leftover fiber from the plants is used for fertilizer, or repurposed.

Tequila is typically 34% to 50% alcohol. The Tres Mujeres brands are 38%. They are especially popular with the Russians and Japanese, as both their countries import tequila from the distillery.

We also saw the cellar, where French oak barrels are used to rest the tequila for between three to six years. The barrels are replaced every 10 years. 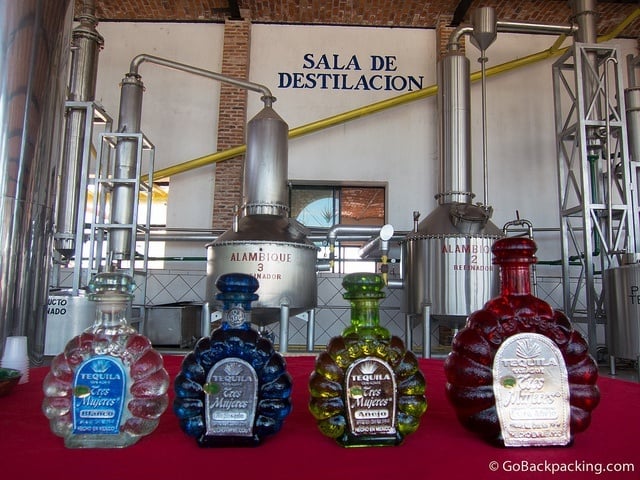 Of course it wouldn't be a proper tour without a tasting, and Tres Mujeres was very generous in this respect. Everyone was poured a shot of four different tequilas, all 100% agave.

Before we began, I learned you lick the salt first to make you salivate, which is supposed to make the tequila taste better.

I sampled the first two, before realizing organic tequila tastes as bad to me as the regular stuff.

I skipped the third nicest (green bottle), and tried one last time with their higher end tequila (red bottle).

Nope, even with the salt and lime, I squinted as the liquor hit my taste buds. 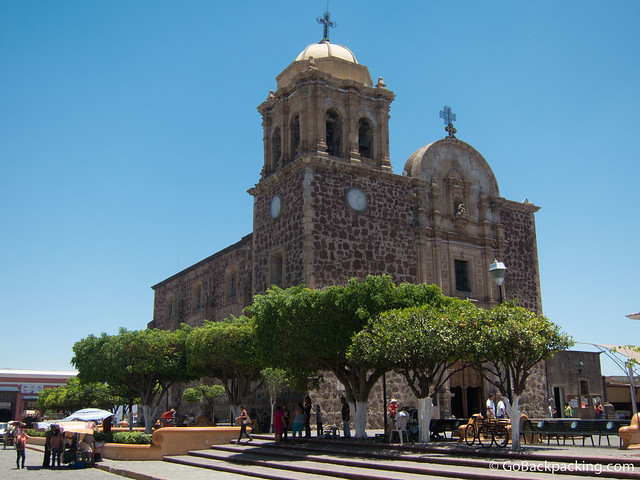 We left Tres Mujeres for the pueblo of Tequila.

“The 34,658 ha site, between the foothills of the Tequila Volcano and the deep valley of the Rio Grande River, is part of an expansive landscape of blue agave, shaped by the culture of the plant used since the 16th century to produce tequila spirit and for at least 2,000 years to make fermented drinks and cloth.

Within the landscape are working distilleries reflecting the growth in the international consumption of tequila in the 19th and 20th centuries.

Today, the agave culture is seen as part of national identity. The area encloses a living, working landscape of blue agave fields and the urban settlements of Tequila, Arenal, and Amatitan with large distilleries where the agave ‘pineapple' is fermented and distilled.

The property is also a testimony to the Teuchitlan cultures which shaped the Tequila area from AD 200-900, notably through the creation of terraces for agriculture, housing, temples, ceremonial mounds and ball courts.” 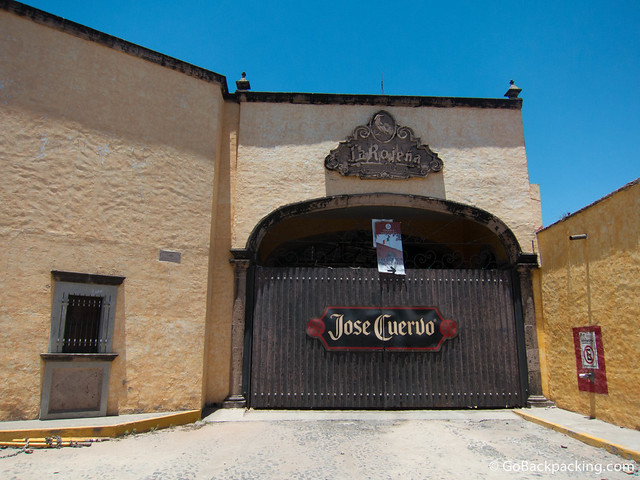 Tequila is also the location of La Rojeña distillery, the oldest factory in Mexico (at least according to them).

It is here in 1795 that Jose Antonio Cuervo became the world's first producer of tequila.

Today, Jose Cuervo is the largest tequila brand in the world, accounting for 19% of the global market. 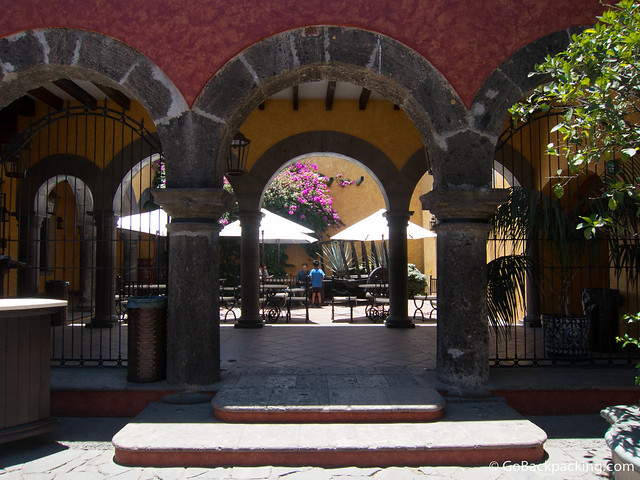 Even if you're like me, and not a fan of tequila, it's worth wandering through the public areas of the distillery as the architecture and courtyards are wonderful.

There's also a bar, of course, which was offering two margaritas for 50 pesos ($4). I doubt you'll find a better made margarita anywhere else in the world.

Pueblo fans would do well to spend a night in Tequila, as it's too hot to truly enjoy during the day, and our tour only allowed us an hour to explore.

Tequila is one of several “magic” pueblos throughout Mexico. This appears to be a tourism campaign to highlight the country's prettiest pueblos.

It's a strategy which would serve Colombia well. 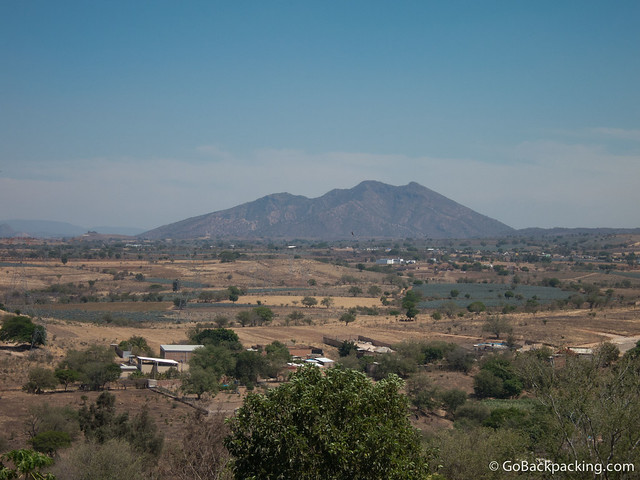 The tour finished with lunch at a typical restaurant, Mariscos El Mar II, overlooking Tequila Volcano and the surrounding plantations of blue agave.

The cost of lunch was not included in the tour, but the prices were average.

Whether or not you like the taste of tequila, I recommend taking a day to do a tequila tour when passing through Guadalajara.

The Agave Landscape and Ancient Industrial Facilities of Tequila became a World Heritage Site in 2006.

Great article, can you tell me where to locate a tour for the agave fields? Also do people climb the Tequila Volcano?

Hi Jennifer, I booked my tequila tour through my hostel in Guadalajara. If you're staying in a hostel in the historic center, it should be easy to find info. Or try Google.

Apparently yes, you can climb the volcano. Check out this article for more: http://www.summitpost.org/volc-n-de-tequila/792233