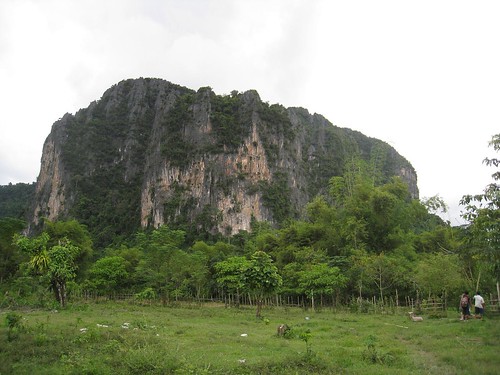 I arrived in Vang Vieng the day before my birthday and decided to go rock climbing as a way to celebrate. A mere 14 years earlier, I had my first experience climbing on a friendly 10-12 meter quarry wall at college.

It wasn't until after I booked a half day trip that I ran into Noy, the Lao-Canadian from Don Det. He was going rock climbing for the first time on the same morning, but had booked through a different company. I could've backed out and joined him to save money, but I didn't see the harm in a little one on one instruction. 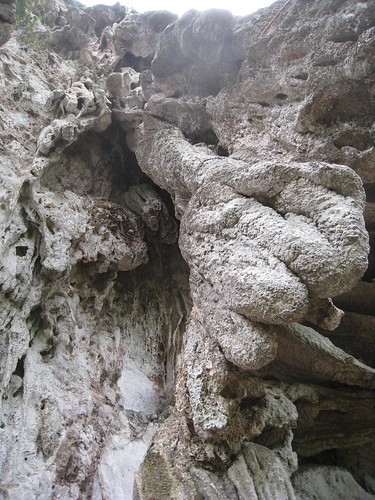 My instructor and I took a 15-minute tuk-tuk ride across the Nam Song (river) toward the large limestone karst with the climbing routes. To get to the base of the climbing area, we walked through a farm, and up some steep, wet, sharp, limestone rocks. As it turned out, Noy's instructor had three other people so they had two groups of climbers (some with previous experience). They were already set up on two 6+ routes (the higher the number, the more difficult the climb). 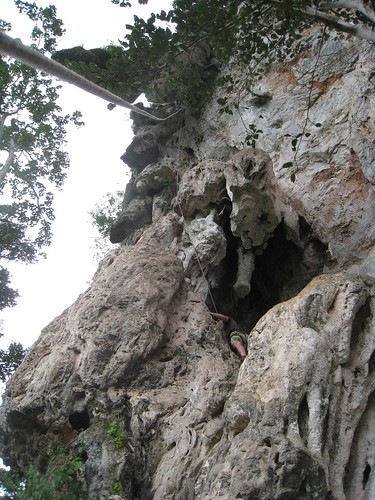 I belayed my instructor while he set up a rope on a 5b route (25 meters high). I set about climbing up it slowly, which was a mistake as my energy and arm strength waned within the last 2-3 meters. Despite the great natural handholds, the limestone was sharp so you payed a price (especially if you lacked good technique). It was far more difficult than the quarry wall where I first learned, and I was happy with how well I did. There is a wonderful sense of freedom from being able to start climbing up crazy rock formations with little consequence should you fall. I attempted the 5b route a second time, but didn't get as high as my first attempt. 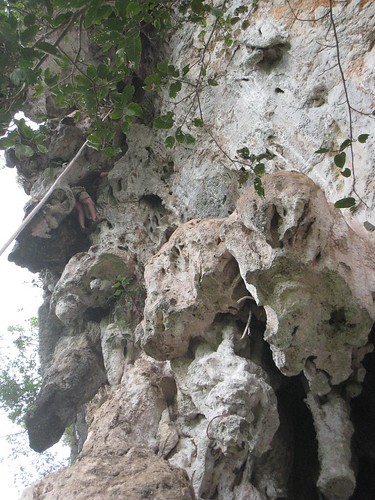 We moved over to the 5a route (about same height) and I again belayed my instructor while he set up the rope. When I began to climb, my instructor fed me crystal clear instructions which lead me to move more quickly and efficiently up the rock. I knew he was pulling for me to reach the top given it was my birthday. He was also taking plenty of photos this time.

I reached a section where I was able to lean my butt back against a rock outrcropping (see above photo) and take a rest. Up until that point, I was performing maneuvers I didn't know I could do! After my rest, again a few meters from the top, I couldn't get up to the next foot hold I needed. While my right knee was digging into the sharp limestone, my instructor was yelling to be careful of it. I called for “tension,” let go, and was eased down to solid ground again. 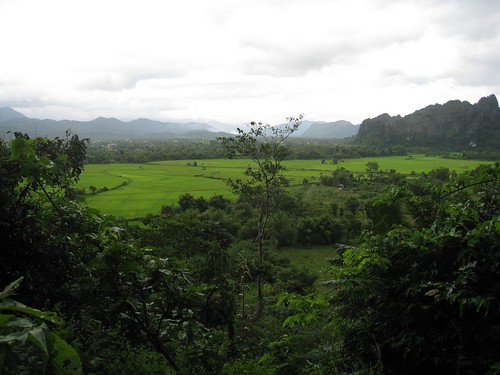 The views were beautiful, and even though I won't be making the cover of Rock Climber Monthly anytime soon, I got the adrenaline pumping. 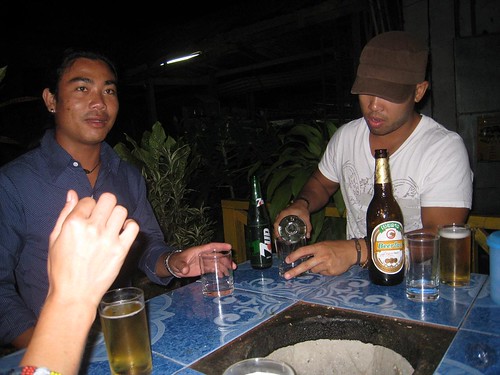 After washing up, I met Noy for lunch and a birthday Beerlao. We also talked with Sandrine, a French woman who was in Noy's climbing group. While Noy and Sandrine were playing pool (and I was getting my MP3 player fixed from a virus) Nicholas and Caroline arrived from Vientiane. They immediately invited me for a beer, along with two French guys from the same minibus.

In the evening, Noy, Sandrine, Nicholas, Caroline and I went for dinner and drinks with Noy's instructor. He spoke good English, and can apparently drink a lot and still get up the next morning to teach tourists. Noy, a bartender back in Canada, made sure I constantly had beer in my glass. All in all, I was thankful to have a few fun people around me for the big day.

What a great way and place to spend your birthday!

What a great way and place to spend your birthday!

Happy belated birthday, Dave! Sounds like you had a good one! :)

Happy belated birthday, Dave! Sounds like you had a good one! :)

Happy Birthday Dave! I've been lurking around your website for a decent amount of time now and you are a huge inspiration. :mrgreen: -Jack

Hi Jack - thanks for writing and letting me know you're out there!