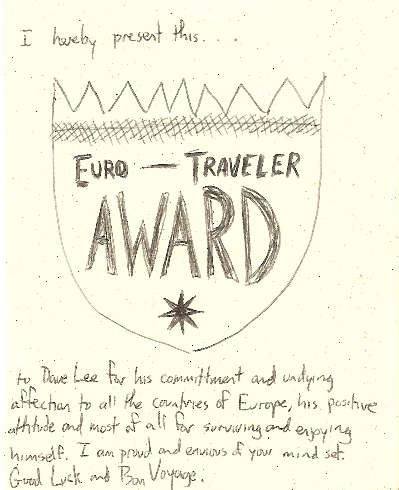 Editor's Note: This is the latest in a series of sponsored posts by Oh-Holidays.com based on my first backpacking trip to Europe.

It was in Florence, Italy that my travel training wheels came off for the first time.

I'd left the US for a Summer in Europe with four friends after college, and less than a week into the trip, there were already hints that several would be going home early. As in five to six weeks early.

And me, the anxious, over-planner who'd never set foot outside of the US aside from family trips growing up?

I was having the time of my life after we arrived in Paris the night of the 1998 World Cup Final, museum-hopped in Amsterdam, partied in Prague, and walked the backstreets of Venice.

Looking back, the signs of our inevitable split were glaringly apparent from the moment we touched down in France.

I wanted to visit every major medieval cathedral I'd studied in art and architecture classes, while several of my friends were to content to read books they brought with them. The consensus was to leave Venice after a few nights, while I could've spent the rest of the Summer there.

In one of a handful of decisions I've made in life where my choice was crystal clear, I opted to finish my European backpacking adventure on my own.

I said goodbye to my best friends as they walked out of our Florence hostel one afternoon.

And then I was alone…

…for all of five minutes.

Another backpacker had come into my dorm room, and we began talking about punk music.

We liked some of the same bands, and the instant rapport with this total stranger was reassuring in that moment. As though I knew I'd be OK traveling on my own from that point forward.

Without the insulating effect of traveling with good friends, I immediately realized how easy it was to meet other travelers in hostels.

The rest of my trip wasn't without its lonely moments. And even today, with instant access to friends around the world via Twitter and Facebook, I still feel pangs of lonliness while traveling.

But as I learned in Florence, if you accept those feelings as normal, that they come with the territory of exploring our world, you can learn to take them in stride.

Thirteen years later, I'm more inclined to rent one of the short-stay Florence apartments in the city then stay in a hostel.

It's the expat life I seek now more than the hostel life.  Because after staying in countless hostels over the years, I've realized they too are a form of training wheels I'm ready to lose.

Dave, you mentioned your preference for a apartment versus the hostel lifestyle at this point.

What about using couchsurfing for situations where you want to hang around a spot for a few weeks to a month or two?

Good question. I still like to use Couchsurfing, but because I'm not good about planning in advance, I typically use it when I arrive in a new city via plane. Like Tokyo this past February -- I couchsurfed my first 4 nights.

I know there are some hardcore couchsurfers out there that use it instead of hostels wherever possible, but I like to mix it up.

Also, most hosts prefer guests to stay only a few days. I once stayed 6 nights or so in Bogota and I def felt like I outwore my welcome, even though my host didn't say anything.