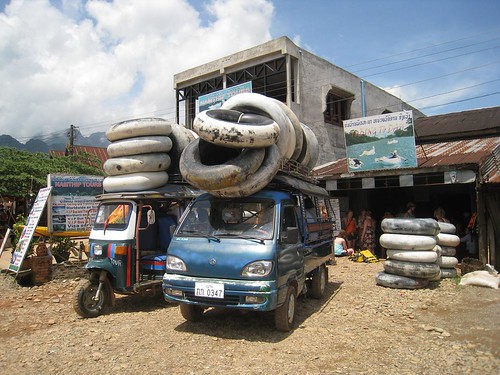 Met up with Nicholas and Thomas (France) around noon. Caroline wasn't feeling well so she skipped the tubing, Vang Vieng's main draw (beautiful scenery aside). My plan was to *not* drink at all, or much, as I was tired from my birthday celebration.

We took the tuk tuk on the ten minute drive to the organic farm and put our stuff in a communal dry bag (we rented) and set off in our tubes down the Nam Song (river). 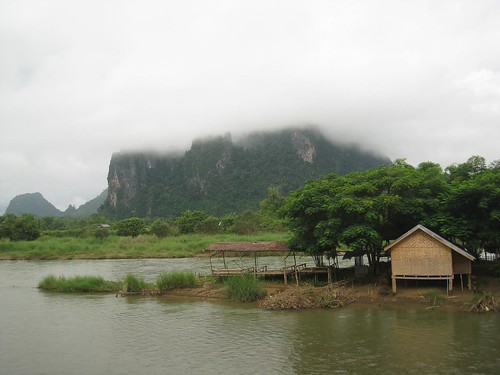 We floated for all of two minutes before reaching the first bar. Loud electronic music was blaring from speakers, people were jumping off the big rope swing which looked more like a trapeze. And everyone seemed to be drinking Beerlao or buckets (usually whiskey and Red Bull). Before I knew it, I was too. Nicholas, Thomas, and Sandrine (who we ran into there) all went off the big swing, but I skipped it. I know I could do it if I wanted. I wasn't particularly afraid.

An hour later, we hopped in the tubes again, Sandrine and a Scot now part of our group. We passed the second bar nearby and floated on. I used my flip flops as paddles which worked out far better than just hands I'm sure. The current moved quick in some places, and occasionally we hit little rapids. 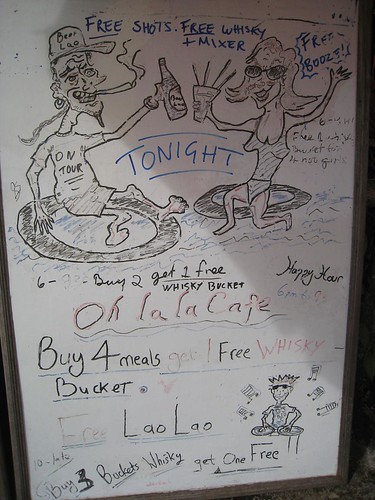 The third bar had a zipline and a crowd (and loud contemporary music). We got off and I did the zipline which was fun. It was easier to hang on then I expected, and I released right before the end would've catapulted me into an unintentional backflip. Those who didn't release in time (and not by design) were flipped like ragdolls. It was amusing, though dangerous given you could hit the water any number of wrong ways.

A few sips from a whiskey bucket, a splash in the mud pits (aka volleyball court), and we were off. We were on the river longer at this point, passing the beautiful limestone karst.

We made our third stop at a quieter bar with a small fire by which people were huddled. After sitting and talking by it long enough to feel warm and dry, it was hard to get back in the water. 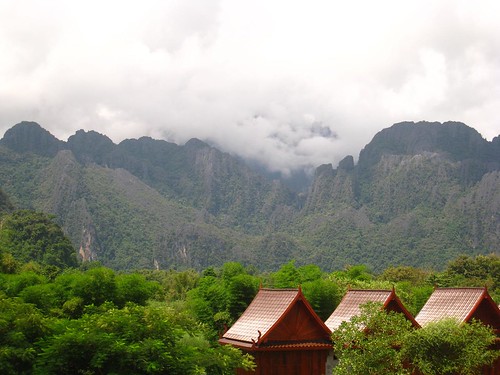 Our fourth and final bar also had the last rope swing, from which I jumped. Again, it was easier to hold on than I expected (by design, the swing gives you a comfortable amount of slack). The others jumped multiple times (and would later tube a few more days after I left). 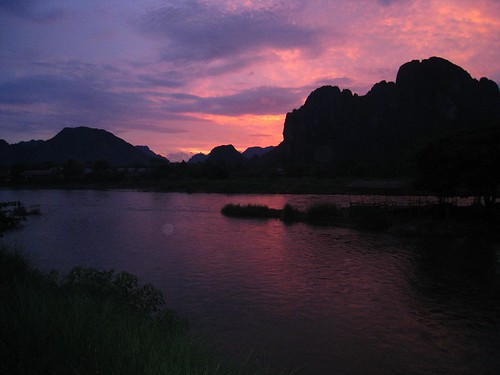 We finished the trip with a 25-minute float back to the little river island. Facing upriver, you had stunning views of the cloud-topped mountains. Stunning! They felt like something out of a movie – Jurassic Park maybe. Aside from a few passing kayakers, we had the river to ourselves (not a likely scene in the high season). There were even a few Laos people fishing and tending to their daily life along the river.  There was a consensus that they must think us tube-crazy tourists are retarded!

Its hilarious watching people get in their tube for all of 30 seconds before getting out at the first bar and tossing their tubes to the side.

I recognize those comic things above , they where done by a scottish guy called grant , i met him in vientiane last year just before he was heading back home after 2 years in VV.

We just couldnt leave your website before letting you know that we really enjoyed the quality information you offer to your visitors? Will be back soon to check up on new stuff you post!