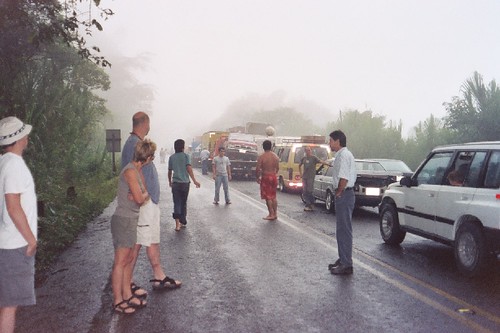 The following journal entry was written Saturday, May 14, 2005 in Costa Rica:

I'm awaiting the pick-up by Exploradores Outdoors to go rafting for the day on the Pacuare River. I'm trying not to be anxious that it's past 6:30 am, though if the tour company knows they have a person to pick up at hostel Pangea, I'm good to go. I checked out the adventure company website, to get a little background, looks reputable. I woke up at 5 am again today. I don't even need an alarm clock. I'm not sure if it's still jetlag or what. I keep losing track of what I'm spending. I bought a $22 Puma Italia Soccer shirt yesterday. Let's see, I've cashed $150 in traveler's checks, and withdrawn $100 from my checking account (really a net of $90 because I got $10 change when paying for the rafting). The rafting is probably the biggest 1-day expense I'll have.

The rafting has come to an end. We got in the river at 10:30 am and were out around 2:30 pm, plus 45 minutes for lunch in the middle. The mini tour bus was comfortable. I'm starting to get used to being driven around the edges of the jungles and cliffs and mountains. Just gotta relax and trust the driver. The ride here was scenic, lots of waterfalls. We stopped for breakfast, toast, eggs, fruit salad (really good), OJ. Then a short bus ride, 15-minute walk down to the river. River Pacuare. I was in a raft with 3 Southern Americans (Mississippi & Georgia), and a couple from San Jose, CA. I got their pic. Veronica and someone (I can't recall his name). Our river guide was Fernando, he just stayed in a kayak, safety guy/photographer. Seemed to have a lot of fun too. Our raft guide was David.

I was wearing my Adidas sandals, not a good idea. First my feet haven't been used to sandals; second there was no ankle strap. So one of the guys had to duct tape. I put two pieces around each foot. 30-45 minutes into the river, my right foot went numb. I realized the tape had cut off circulation to the lower half of my foot! I pulled the tape off and began shaking my foot, then switched sides with the other guy in front. My foot started to feel better, and then I realized the sandals were hurting my feet too. I realize I was wearing the worst possible footwear, and fiddling around with them in rapids was not smart. We hit two Class IV rapids and five Class III rapids. There were rapids quite often, with rests of calm water maybe one to two minutes long. Saw some butterflies, vultures picking at a dead sloth, and a few birds here and there. We saw plenty of waterfalls, and rode beneath a few. Lunch was tortillas with lettuce, onion, turkey, ham, cheese (burrito), trail mix, watermelon, pineapple, and lemonade.

At the end, I had an Imperial, water and another granola bar. I could've used more water, I'm feeling a slight headache, definitely need to pack more snacks and water going forward, just in case. For example, 45 minutes into the way back to San Jose, traffic jam. A car flipped over. The ambulance has already left, and we're still parked. It's been about 30 minutes. I'm starting to see my sunburn. We got out of the van, as many others got out of their cars. A car in front of us with a group of young men started playing soccer, juggling the ball with music playing in their car. It's such a contrast to America in our traffic jams. I took a picture, I had too. It is a cool scene. The guys aren't in a hurry, pissed off, talking on a cell phone. Just interesting. I'm feeling a slight headache. Probably a bit dehydrated. On the river near the end, we all jumped out of the rafts. I was floating on my back, looking at the forest from another viewpoint. It was wonderful. I felt very lucky to be there, at that moment, present to enjoy the splendor of nature.