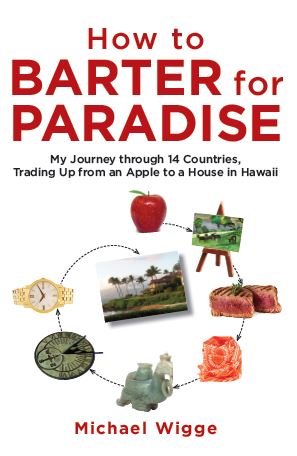 The following is a guest post by Michael Wigge, author of How to Barter for Paradise.

[I] had set a goal: I wanted a house in Hawaii.

To get it, I would travel around the world, bartering an apple for bigger and better items, finally ending with the Hawaiian home.

It is, and I went through 14 countries, making 42 trades along the way to reach that goal.

It required almost a year of planning, specifically about what I should bring. Here are 10 things I packed for my journey.

This costume basically looked like an American superhero similar to Superman, but on the front it said “Barterman”.

I wore it several times to attract the attention of a possible barter partner. It worked well, especially in America, where people started queuing up to barter with Barterman!

Yes, I admit it. A camera in your hand always makes you look more important, so people are more likely to join your crazy project.

Some millionaires joined this barter ordeal most likely because they wanted to be filmed as the hero who helped Barterman reach his goal.

The third item I put in my backpack was a manual that explained how to distinguish a real diamond from a fake.

I know this sounds random, but I needed it in Tanzania, where I planned to barter three ounces of gold for a tanzanite, a diamond only available in Tanzania.

The manual came in handy, as I was able to figure out that the diamond presented to me was not as valuable as its owner claimed. Tanzanite Trade canceled!

Yes, I took two guys with me on that trip around the world mainly for logistical reasons. When you barter for bigger and better, be prepared to carry huge goods around—at one point I had a table and a surfboard.

The apple was just a small start of a long chain of goods I needed to barter in order to reach the house. You really need people to carry this.

This was extremely important for me, because during that 200-day world trip, I contacted about 1,000 people by mail to ask them for a barter deal. 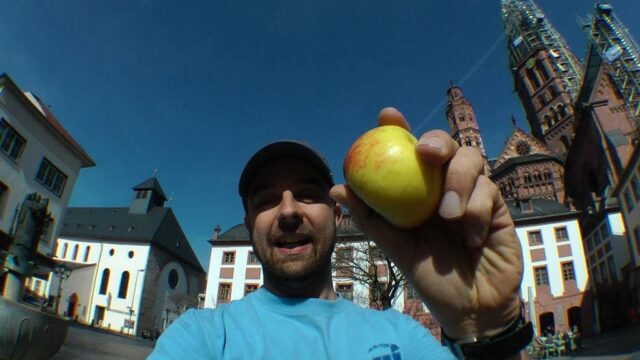 The author with his apple in Germany

Before leaving to travel the world, I ordered contact lists for media outlets in several countries. Publicizing myself was important. I wanted people to know that Barterman is in town to barter!

For example, I ended up dressed up as Barterman on a Comcast TV Show in California.

7. A painting of a Hawaiian house surrounded by flowers

It just fit into my backpack. This rather kitschy image of my dream house in Hawaii was a great support during the trip. Looking at it on a daily basis motivated me to continue bartering and not give up.

Always keep an image of your dreams with you. It will help make it happen!

No joke, I had to take cell phone SIM cards from every country with me to be able to communicate quickly with local people for possible barter deals.

I still have that collection that ranges from Indian Vodaphone to Ukrainian UTEL cards.

Don’t forget that before you leave, because you won’t reach that dream house otherwise.

Actually I didn’t take any with me, which was a big disaster. I got parasites in India which made me seriously sick for three weeks.

I also ended up with huge back issues and an endless flu at one stage. No medication, no good!

About the Author: Michael Wigge is a German journalist, filmmaker and author of How to Barter for Paradise and How to Travel the World for Free.

That is absolutely amazing! I love how people are getting more and more creative in figuring out ways to travel and get someone else to pay for it. Kudos to him for thinking out of the box. I hope more and more people will take inspiration from him and get out of their comfort zones to travel around this beautiful world of ours. Thank you for the post!

Going to order the box and take it with me on my next adventure!

This is crazy! Fair play to him.. A well executed plan that helped him achieve his dream!